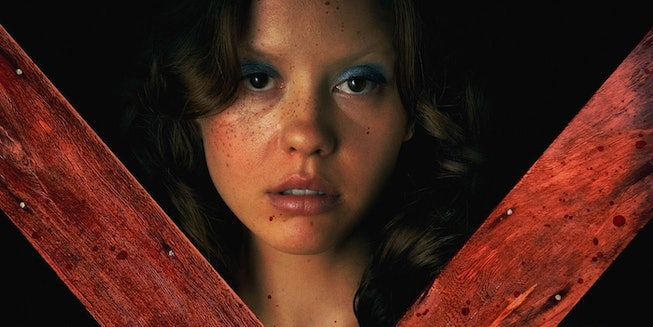 After a year surprisingly short on their trademark horror fare (only Lamb and False Positive really qualify), A24, the studio behind horror hits like Hereditary and The Witch is starting 2022 off with more of their signature spooks. Up first on the roster is the simply-titled X, which takes place in 1979 and follows “a group of young filmmakers [who] set out to make an adult film in rural Texas,” according to a plot synopsis. “But when their reclusive, elderly hosts catch them in the act, the cast find themselves fighting for their lives.”

X is currently playing in theaters nationwide, and on Thursday, April 14th will be available on VOD and streaming on Amazon Prime, Apple TV, Vudu and more (head here to find ticket times and where else to stream the film). On May 24th, the film will be available on Blu-ray and DVD.

Written and directed by The Innkeepers’ Ti West, the upcoming horror film stars Pitch Perfect’s Brittany Snow and the Lonely Stoner himself, Kid Cudi, as the aforementioned adult film stars. (Not for nothing, Kid Cudi, who just appeared in Don’t Look Up and will next be seen in Netflix’s Entergalactic, seems more focused on acting than rapping these days.)

The cast is rounded out by Suspiria standout Mia Goth, Grey’s Anatomy’s Martin Henderson, The Miseducation of Cameron Post’s Owen Campbell, The Lord of the Rings’ Stephen Ure, and NYLON’s latest It Girl Jenna Ortega (who’s having a real horror moment this year, as she gears up for this week’s release of the Scream reboot and the imminent arrival of Tim Burton’s Wednesday Addams series, Wednesday, where she will play the titular character).

X is just one of many movies A24 has lined up for 2022. Also on the docket is Jesse Eisenberg’s Julianne Moore-starring directorial debut When You Finish Saving the World and Kogonada’s Colin Farrell-starring robot family drama After Yang — both of which played at Sundance 2022. The popular studio also has a potential hit on their hands with the Michelle Yeoh-starring multiverse thriller Everything Everywhere All At Once.

Watch the spooky trailer for X below: