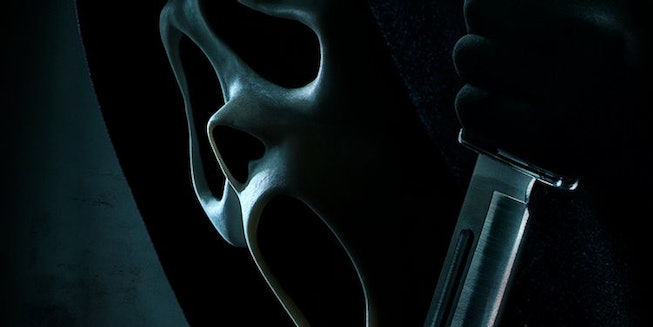 The countdown to Woodsboro is underway. The fictional California town and the backdrop of the iconic satirical horror franchise Scream is coming back into the spotlight, along with the highly-anticipated fifth film installment. The forthcoming film returns to its roots, not only to Woodsboro, but also with the title, opting to drop any numerals for the very clean Scream. It’s a move well-suited to the horror franchise known for its meta-commentary as much as its slasher legacy, and likely means that we're going deeper into the self-referential Scream mythology than ever before. It begs the question: Do you like scary movies? See everything to know about the forthcoming Scream film, below.

Get ready to see familiar faces

Scream will be co-directed by Matt Bettinelli-Olpin and Tyler Gillett, the duo behind the 2019 campy class warfare horror flick, Ready of Not, which feels like the right step into filling the late and great Craven's directorial shoes. Bettinelli-Olpin chatted with Collider on what to expect from the fifth installment back in November 2020 and pretty much promised to scare the hell out of the audience.

"If something’s truly scary, it’s just going to be fucking scary and that’s our aim," he explained. "And that’s something we learned from Wes Craven going all the way back to Last House on the Left. Nightmare on Elm Street was probably one of the first horror movies any of us saw that truly scared us in a major, major way seeing that as a kid. When it comes to that kind of thing, I think that’s one of our main goals is just to make sure that the scary is scary and not try to be gentle about it."

Their passion for Scream, Craven, and horror at large is actually what encouraged Campbell to return to reprise Sidney. "The idea of making these films without Wes Craven seemed challenging to me. I loved the man very much,” said Campbell to Entertainment Weekly. “But Matt and Tyler wrote me a letter, speaking of their appreciation and great respect for Wes Craven, and speaking of the fact that the very reason that they are directors today was because of these movies and because of Wes, and that meant a great deal to me."

It’s heading to theaters in early 2022

The original Scream screenwriter and now executive producer Kevin Williamson announced that the film officially wrapped production on November 18, 2020 and would be hitting theaters on January 14, 2022. Although Williamson isn’t behind the forthcoming, likely super-meta screenplay, it’s still in pretty good hands with screenwriter James Vanderbilt of Zodiac, The Amazing Spiderman, Ready or Not, and more.

"Nearly 25 years ago, when I wrote Scream and Wes Craven brought it to life, I could not have imagined the lasting impact it would have on you, the fans," he wrote in a heartfelt post including behind the scenes photos. "I’m excited for you to return to Woodsboro and get really scared again. I believe Wes would’ve been so proud of the film that Matt and Tyler are making. I’m thrilled to be reunited with Neve, Courteney, David and Marley, and to be working alongside a new filmmaking team and incredible cast of newcomers that have come together to continue Wes’s legacy with the upcoming relaunch of the franchise that I hold so dear to my heart."

On July 7, 2021, Bettinelli-Olpin confirmed that Scream was complete. “We’re so excited for you all to see it soon,” he wrote in a tweet, signing it off with the hashtag #ForWes. As a horror pioneer, Craven not only brought Scream to reality and directed all the previous four films up until his passing in 2015, but also created the A Nightmare on Elm Street franchise and directed cult classics The Last House on the Left (1972), The Hills Have Eyes (1977), The People Under the Stairs, and more.

Ghostface & co. return for a bloody (and self-aware) Scream trailer

The first trailer for Scream landed on October 12, and the latest evolution of Ghostface shows no mercy on the poor denizens of Stars Hollow. From the get go, the slasher has gotten more technologically sophisticated (hacking into a home security system is very much “of the times”) and after three victims, Deputy Riley has no choice but to call in for reinforcements: Gale and Sidney. The latest Scream installment is naturally keeping true to its satirical roots, and the trailer features Dewey harkening back to the original Scream and explaining the rules to staying alive. Rest in peace, Randy Meeks! Watch the whole thing, below.

A new featurette released on November 4 teased a few more clues about the forthcoming Scream film. As the trailer suggested, all the new characters in the franchise have some sort of of connection to Ghostface’s victims. "We had this special story to tell that connects the legacy cast members with the new cast into the world of Woodsboro," says Williamson.

The film follows Barrera, who plays new protagonist Sam Carpenter, Ghostface’s latest target. Thankfully, she’s got Dewey, Gale, and Sidney on her side — and we all know they have more than enough experience outliving a crazed killer.