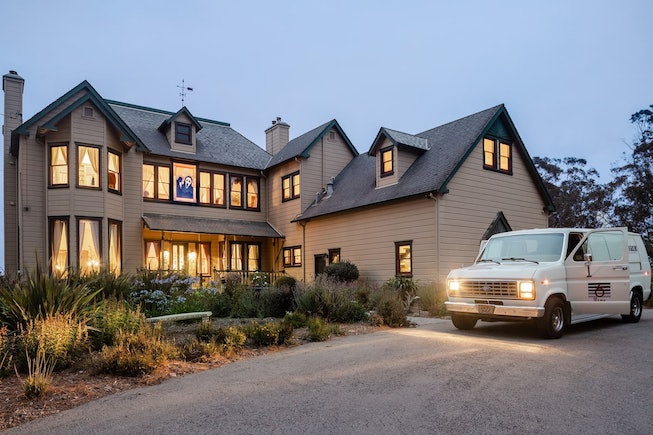 The air is cooler, leaves are beginning to crunch under your feet, and suddenly, your loved ones are caravanning to wooded areas to feel “cozy” and pretend they enjoy the novelty of apple picking in exchange for a few paltry likes on social media. It begs the question: Do you like scary movies? Horror fans who consider Halloween to be on par with Christmas can show off their bravery while taking their celebrations to the next level by booking a stay in the original house from the seminal 1996 slasher thriller, Scream, through AirBnb.

The Scream house bookings are wildly affordable at only $5 a night for up to four people. Woodsboro’s most well-meaning officer of the law, David Arquette’s sheriff Dewey Riley, will virtually greet guests upon arrival before they explore the twisted home’s iconic details, from knife marks on the doors to the garage where Dewey’s sister, Tatum, met her unfortunate demise. It’s not a visit to the Scream house without a Scream marathon (on VHS, of course) and there’s even a direct phone line to contact Ghostface for those who love to test the boundaries of a masked slayer. Guests can also indulge in 90s snacks like Jiffy Pop or ice cream decked out with Reddi-wip, and even snag a Scream memorabilia bundle including a DVD set of the films, Woodsboro High gear, a Scream (2022) poster, and more.

“Protecting the town of Woodsboro is my life’s duty, and I’ve certainly developed a knack for escaping Ghostface,” said Riley in a statement. “As your host, I’ll be keeping a watchful eye on guests to ensure no one gets surprised by an unexpected plot twist. Trust me, horror movies always keep it interesting, for better or for worse…”

The horror franchise is celebrating its 25th anniversary this year, and gearing up to release its fifth installment in early 2022. It will be the first film in the series not to be directed by Wes Craven, who passed in 2015. The slasher film will likely be as meta as ever, and will have Arquette, Neve Campbell, Courteney Cox, Roger L. Jackson, and Marley Shelton return to reprise their original roles.

Airbnb’s Scream house is a strictly spooky season offering, with only three one-night stays at the Tomales, California home available for October 27, 29, and 31. Woodsboro fans: Be on high alert once bookings open on October 12 at 1 p.m. EDT over on its website.