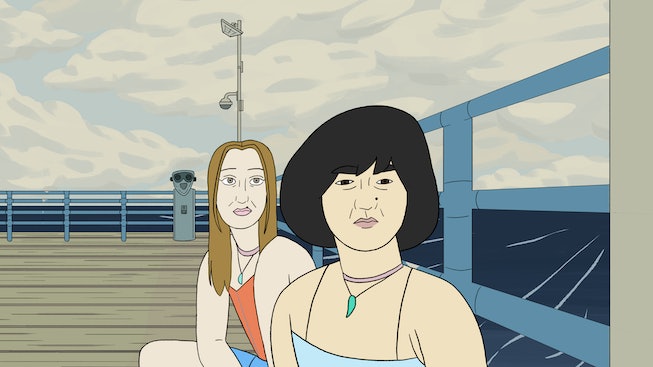 Just in time for end-of-summer blues, a special animated episode of Pen15, everyone’s favorite show about the brutally awkward middle school years, will release on August 27 on Hulu.

For the uninitiated, Pen15 is a comedy series starring Anna Konkle and Maya Erskin, who play versions of themselves as 13-year-olds, surrounded by actual 13-year-old actors. It’s an absurdist, laugh out loud, “traumedy” about the pains of being a pre-teen, and was just nominated for an Emmy for Outstanding Comedy Series for the first half of the second season, which premiered last September.

This episode, titled “Jacuzzi” is about how Anna and Maya are “introduced to new crippling ins insecurities,” according to an official synopsis. “The girls try to ignore them, but a mystical turn makes their self-doubt impossible to forget.”

In an interview with Vanity Fair, Konkle says the episode centers around a spring break trip to Florida. “The basic premise was going on vacation in Florida, and it never really being what you thought it was going to be,” said Konkle. “For me, it was staying at these economical —whatever my parents would call them — hotels and waiting for the fun to start and being like…it’s never going to start.”

Konkle goes on to say that the episode was originally going to be a live-action, 40-minute special, with her and Erskin wearing prosthetics and using camera tricks to show the surreal experience of visiting the state. When COVID happened, they had the choice to wait it out, or to animate it. They started working with an animator in Ireland and working on ways to showcase that surrealism through the animation.

This will be the series first animated episode, which was written by Konkle. Teaser stills show cartoon versions of 13-year-old Anna and Maya wearing flip flops, choker necklaces and sitting on a dock looking bummed out — which feels like a 7th grade spring vacation to Florida!