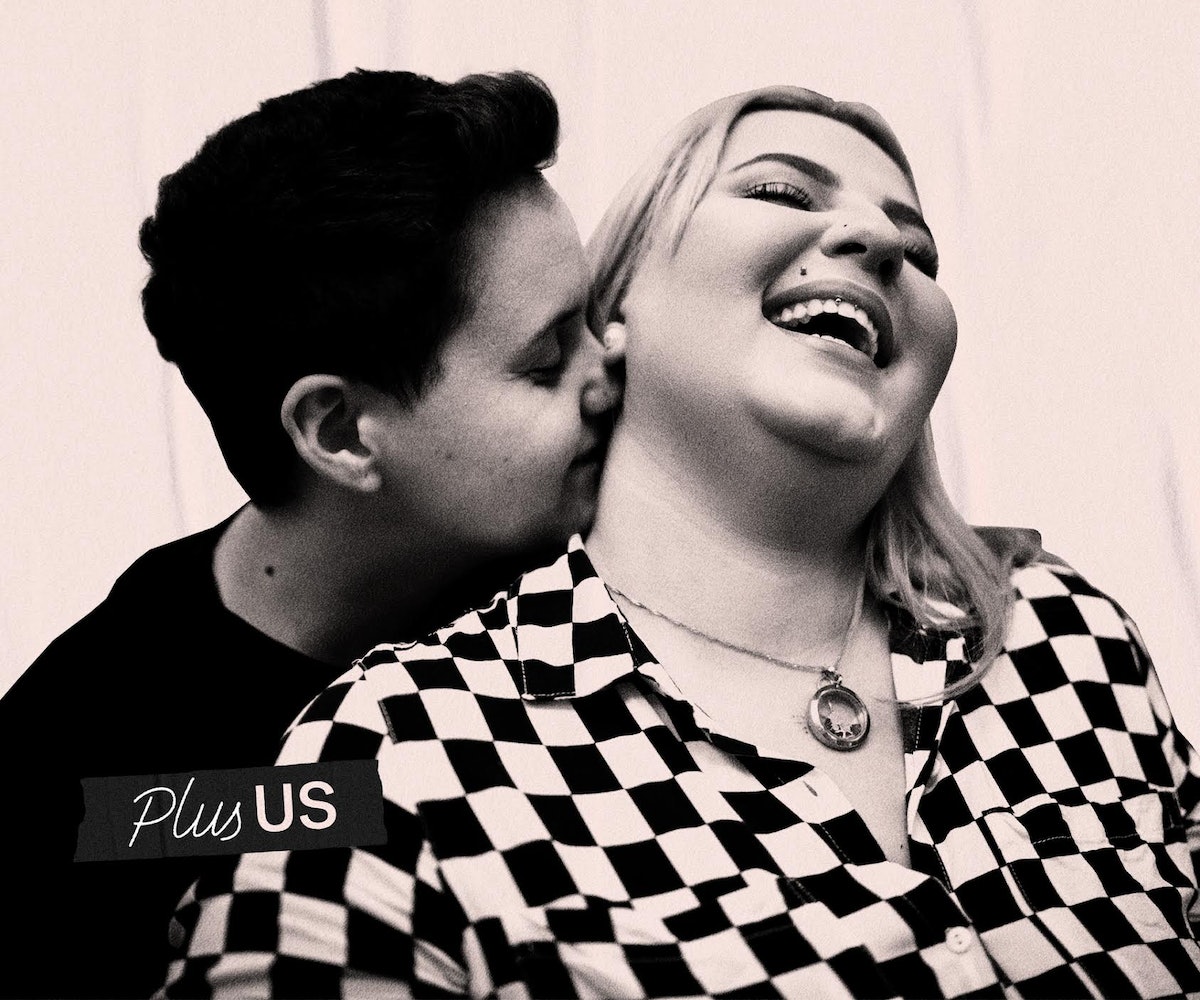 As hot girl summer — or shot girl summer, as vaccinated hopefuls have coined it — approaches, many are preparing to burst from their quarantine cocoons back onto the dating scene. But for plus-size folk, a hesitancy arises. What should be an enticing moment is weighed down by the perils of being fat in a thin-first dating pool.

Dating when plus-size is filled with its fair share of difficulties. And in our digital-first society, where popular apps remain saturated with harassment, the level of vulnerability it takes to put yourself out there is sometimes too much to bear.

“It’s hard enough to try to post a selfie without using filters, let alone a full body shot, thinking about how potential matches will respond,” says Kamie Crawford, co-host of MTV’s hit show Catfish: The TV Show. “Then the anxiety of, ‘OK, well, if I edit this photo a little bit, or if I post a picture from a better angle, when I actually have to meet this person in real life, what is that interaction going to be like? Will I get the same ridicule that I may have grown up with?”

Crawford points to the pressure many plus-size individuals feel to “slim down” for their digital profiles, sometimes even going as far as falling into the conundrum of catfishing. This often comes from a place of insecurity rather than malintent. “There’s so much more behind the scenes that's going on there than just, ‘Oh, that person hates their body,’” Crawford explains. “No, the world hates your body. And that's something that you deal with every single day. People don't give you any kind of leeway or slack for anything when you have a fuller figure.”

That societal stigma is what turns many away from the dating scene, or leads them to create an overly curated, borderline unrealistic dating profile. It stems further, however, than the pressure to be deemed “hot enough” for a swipe right. For many plus-size folk, online dating can be an unsafe, potentially dangerous environment.

“When you’re plus, there are all of these kinds of check marks that you have to go through,” says model Grace Clark Delgado. “Are you a chubby chaser? Is this a fetish for you? Do you just want to sleep with me because of my size? Would you be comfortable going out in public with me? Do you just want me to come over to your apartment at night because you can't be seen out in public with a plus-size person?”

Fat bodies — particularly those of Black women and other people of color — have been heavily fetishized over the years, from Hollywood and media portrayals to direct interactions. Under the guise of “chubby chasers,” these fetishizers use plus-size women for instant gratification, as a check mark on their list of conquests, or as an object to dominate. As influencer Simone Mariposa writes, “The object in question is an ENTIRE FAT BODY. It’s being objectified and picked apart like a car engine and described by its functions for arousal.”

Delgado partnered with Tinder last year to take part in a popular video series created by the dating service. While she expected some level of hate to come upon release, the overwhelming negative reaction to her size showed her how unwelcoming and damaging online dating remains, even as the body positive movement makes mainstream waves.

“It just reminded me of the sh*tty reality of humanity and these trolls in the comments, reinforcing the idea that no one's gonna like you because of your size, you're gonna die and get diabetes, etc. It just makes me really sad to think of the people who are receiving those kinds of responses,” she says.

For Sean Taylor, a contestant on Season 1 of Netflix’s The Circle, a history of facing these issues led to her choice to catfish on the show as a thinner woman. “I wanted people to really get to know me, and not just see a fat girl and write me off,” she explains.

Taylor’s choice was met with backlash from some viewers, yet resonated with many who have felt the otherness of dating when fat. In the past, she’s had to navigate a plethora of assumptions based on her body type — that she’s easy, that she’ll take whatever she can get, that she’s gullible. The Circle was her chance to show her true self, beyond her body type.

But the mere fact that Taylor needed to conceal her body to be viewed as a whole individual is indicative of how unwelcoming the dating sphere can be. “A lot of plus-size women view their body as a hindrance, and I’m so against that because there are so many people out there who will view your body as an asset — it’s what attracts them,” says model Michaela McGrady, who recently launched the Model Citizen podcast with Dear Media alongside her sister, fellow model Hunter McGrady.

Hunter adds, “Post full-body photos on your page. Do it right off the bat, and let them know who you are, what you’re about, and be proud of it. Own it.”

While both sisters are adamant that your size is the least interesting thing about you, they recognize that society places us in dating bubbles based on how much we weigh, leading some to try and hide their bodies online. They strongly encourage otherwise.

Despite the bleak moments, there is real possibility in online dating, as all of those interviewed point out. Hunter, for instance, met her husband via Snapchat five years ago, and the happy couple are now expecting their first child together. With the struggles they’ve had to navigate, all five women point to similar advice.

First: Prioritize your safety — not just physical safety, but your emotional and mental well-being, too. Second: Be authentic and true to who you are. Don’t feel pressured to compensate for your body with other notable qualities. All of it is part of the larger package you offer. Third: Keep your eyes open, and throw away those checklists. “The second you have these definitions of the person you’re looking for, it limits you,” Michaela says. “People are much more complicated and nuanced. And to sort of dilute a human being down to a list is not fair to them, not fair to you, not fair to what they can bring to your life.” And fourth: Always remember your worth.

Taylor adds, “You have to get really honest with yourself about, ‘What do I actually want out of this? How do I expect someone to respect my body and respect my boundaries? What kind of support do I want when I'm maybe not having such a good day?’ And if that's important to you, then it's absolutely necessary that you build that into your relationship from the very beginning.”