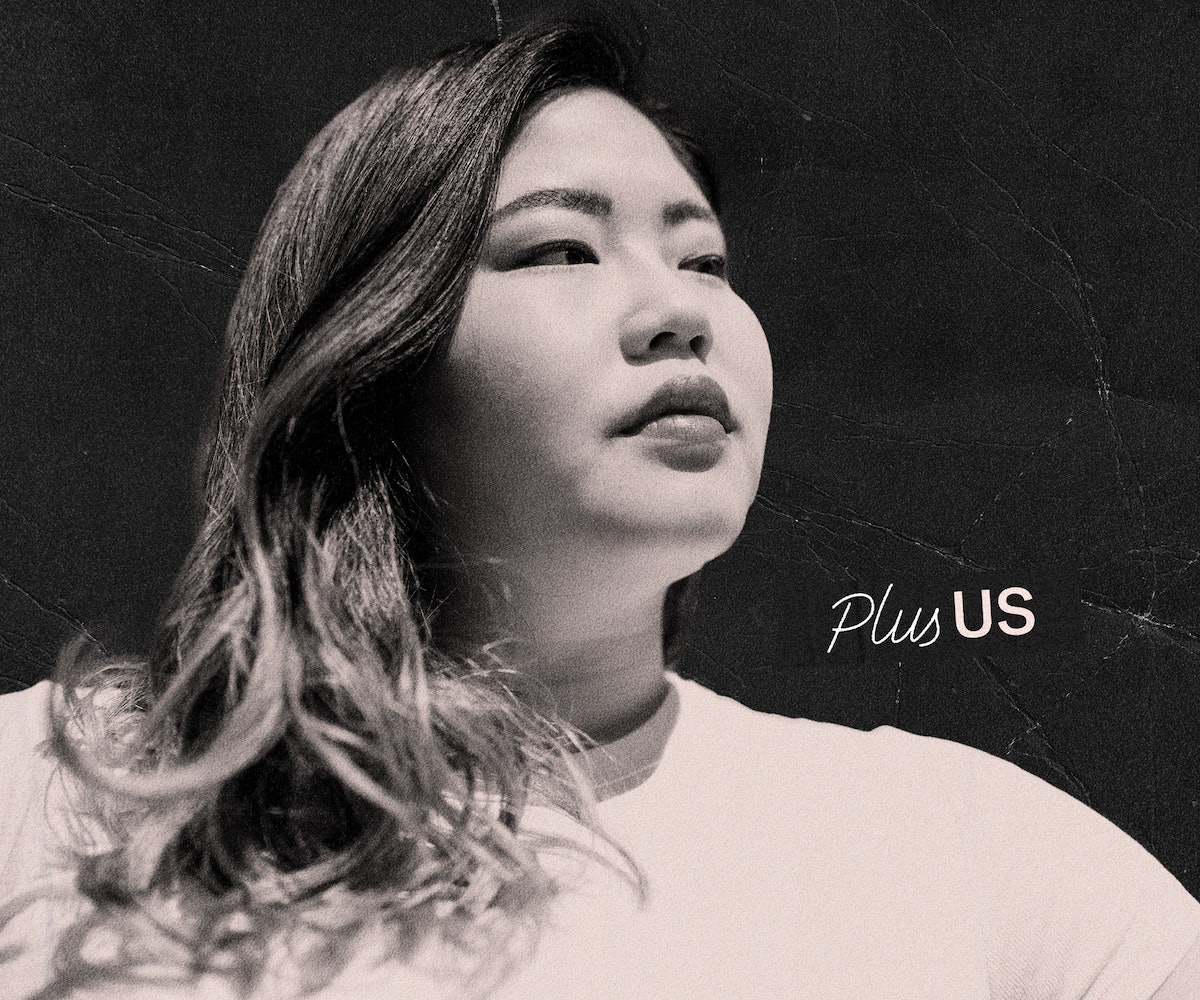 Despite the fact that intersectionality lies in the very groundwork of our community, the conversation around size inclusivity often remains white-focused. Efforts to uplift more marginalized voices within the plus-size space — particularly of Black women, who originated the body positive movement — have often neglected an important experience: that of the Asian American Pacific Islander community.

“I often feel like my lived experience is completely invisible,” says Ushshi Rahman, a Bangledeshi writer now based in New York City.

The pendulum has begun to swing, however, as a rise in AAPI hate crimes has skyrocketed over the past year. But within the plus-size sector, little space remains for honest dialogue about what it means to be fat and Asian in society today, and how rebellious that notion can be for those who proudly claim both identities.

Rahman describes fatphobia in South Asian countries as being “harsher” than American fatphobia, “cutting across more lines, socioeconomically as well. It means something very different over there than it does here.” Nearly a decade since the last time she was home, Rahman is fearful of how she’ll be treated the next time she lands in Bangladesh, remembering how badly she was treated at just 150 or 200 pounds.

She explains, however, that fatness within the AAPI community is not a “unilateral experience,” varying greatly from culture to culture. To lump all together under this umbrella term fails to move the needle in terms of representation in impactful, long-lasting ways.

Vanessa Camille Ronquillo, a first-generation Filipino American, spent her early childhood on a military base in Japan before immigrating to the United States. “I remember thinking, ‘Wow, I am so much bigger than all the other kids here,’” she recalls. “I never fit in.” Her natural-born exuberant personality was silenced as she entered middle and high school, succumbing to the stereotypes and stigmas that plagued her. It wasn’t until post-college that Ronquillo began to step into her own power, claiming space for her intersectional identity that had yet to be fully represented in the mainstream.

She adds, “Growing up, I felt like I was wearing a tent over me to cover up who I was … Not being the ‘ideal Asian American’ or the ‘ideal Filipino’ who is traditionally petite made me always self-conscious about my weight. And now, it’s really played into my mission to bring more representation to plus-size Asian Americans.”

Authentic representation cannot be achieved, however, without honest, raw conversations. And for decades, the AAPI community has been rejected from entering such spaces. Rahman attributes much of this to the “model minority” myth, in which Asian Americans are collectively viewed as “successful” in terms of blending into American culture, escaping systemic racism out of sheer “hard work” and “determination,” according to NPR.

Canada-based Leila Kelleher’s experience is far different from those of Rahman and Ronquillo. Kelleher is transracially adopted. In high school, she struggled to fit in with fellow Asian students, failing to find commonalities culturally while sticking out as “the fat one.”

“Moving through the world as a fat Asian is a very weird place to be,” Kelleher says. “Especially when it comes to the amount of fetishization that Asians particularly have to deal with. If you date men as a fat, Asian woman, they often expect certain things based on body type and perceived sexual behavior.”

She first encountered cultural fatphobia on her work travels to Asia, recalling a time in Korea when last-minute shopping for clothes was utterly impossible. “I was mortified,” she says. “At least to me, it seemed like the clothes only came in one size.”

That othering experience made Kelleher understand quickly that no matter her heritage, she did not fit into what was deemed acceptable.

Ronquillo also believes that this lack of dialogue on the curvy AAPI experience is due to a cultural normalization of body-shaming where women like her feel pressured to internalize their pain rather than express it. Social media has helped to change this somewhat, with virtual connection bringing together these lived experiences. But publicly, a stigma still remains, both by the media and by women themselves, who fear speaking out will divide them from their heritage.

Rahman echoes her point, noting that the “canals of the internet” have created a never-before-seen conversation around fatness within the AAPI community. She’s also formed those relationships in-person after living in New York City for over a decade now, “as the intersecting lines of race and class within the New York City community” are binding.

And although their experiences are far different, Ronquillo has found power in connecting with those of other marginalized backgrounds, like Black or Hispanic advocates, who can all bond over the shared feeling of being the “other.”

“Taking inspiration from a lot of different places and people has really helped me to build my confidence and embrace my curves,” she says.

As the internet as a whole moves to elevate AAPI voices, Rahman hopes that individually, we each make a deliberate effort to seek out underrepresented voices from within this community. Change is underway: Influencers like Scarlett Hao and Allison Teng are creating widespread visibility within the fashion space. Sports Illustrated featured its first plus-size Asian model, Yumi Nu, this past March, with others like Lovisa Lager, Minami Gessel, and Sarennya rising the ranks.

“Waiting for someone's popularity or someone's social media numbers to necessarily reflect and come before you find them is not right. You need to actively look for people from the AAPI community. There are so many wonderful fat folks doing work, being present, being visible in the media,” Rahman says.

She adds, “Make room for the fact that our experiences are different from other people's experiences, and they're part of what makes it beautiful, and part of what needs to be acknowledged.”

NEXT UP
Culture
Not One, But Two BTS Documentaries Are Coming
Astrology
Your Natal Saturn Placement In Astrology, Explained
Culture
Spotify Wrapped Is The Only Social Media That Doesn’t Lie
Fashion
Reformation & Canada Goose Team Up To Warm You Up