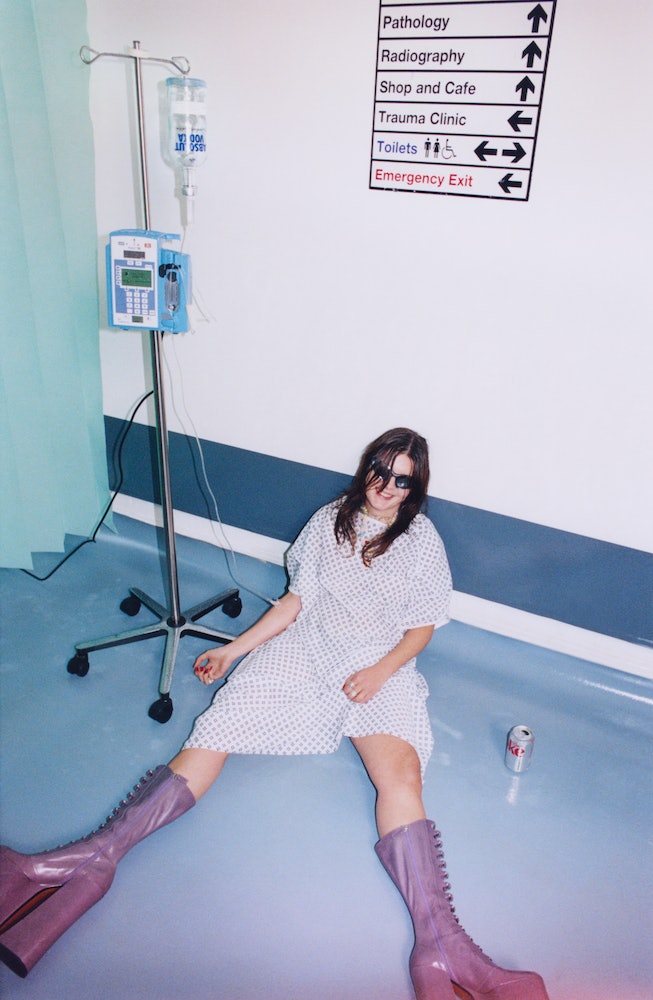 It’s the second to last show on Pretty Sick’s 31-city tour, and frontwoman and bassist Sabrina Fuentes is sitting in the green room of the Bowery Ballroom after soundcheck, before makeup. She’s surrounded by a couple of bottles of champagne, a bouquet of flowers, a vanilla Milk Bar cake with the words “sell out” written in frosting. She’s been on the road for weeks, but tonight she feels only energized, perched on the end of a couch with her friend Dusty Rose Ryan seated beside her.

“Maybe I’ll crowd surf tonight,” she says. I was surprised she hadn’t yet. Pretty Sick’s debut album Makes Me Sick Makes Me Smile is a powerwash of frenetic, snarling rock music that induces mosh pits and erratic head bangs with the fierce strum of a couple of chords. Not to mention Fuentes has amassed a devoted fan base who were already lined up in front of the venue by 5 pm, despite 40 degree weather.

“I’ve been in a lot of smaller venues, so I don’t feel comfortable taking their mic into the audience in case someone breaks it. Here, we’re in a big awesome venue with amazing sound, so I feel more comfortable diving headfirst into a crowd of 13 year olds,” she says. “They can carry me.” If anyone can, it’s a crowd of New York City teens and many of her close friends.

For Fuentes, the Bowery show is a homecoming. Not only is it the last stop on her tour, but it’s returning to the place that inspired most of her songs: a return to the “roses in Tompkins Square Park,” she sings of, of the nights, “Out of Bowery at midnight in the summer/I can't help but smile when she says I'm her lover.”

“I’m excited to talk about all these songs in front of this audience in my hometown because a lot of these songs are about my hometown, so it’s super sentimental to me,” she says. “I think it will feel different for me because I'll feel sentimental and emotional about it. These are venues I grew up going to. I might shed a tear.”

In person, Fuentes is extremely chill with an undercurrent of electricity, like a low bass line you know could turn up at a moment’s notice. She has a naturally deep voice that she peppers with shrugs of “I don’t know” and “I guess.” She can’t believe people showed up so early, and in such fun makeup, which tries to mimic hers: pale face, black lips, jet-black eyeliner, prosthetic fangs. “They always outstyle us,” she shrugs.

But two hours later, onstage, she’s morphed into a force of rock and raw emotions and guttural screams. She snatches a bottle of champagne from someone in the audience, takes a swig, and throws her head back in laughter or in a scream, or maybe both. On more than one occasion she apologized for being drunk – but what else are you going to do when you go home for Thanksgiving?

“Almost all this music is written about New York and about all of my friends who are here,” she yells, inciting a freakish applause. She gives shoutouts to her friends, who pepper the show with “Sabrina! So hot!,” “Sicky Sab!” in reference to her Instagram handle, and “I love you so much.”

“Normally, we’re a lot better than this,” she says toward the end of the set. “But I got too drunk.” In the crowd, nobody cares. She’s shredding her bass and bodies are crashing against each other and Ryan is leaning far over the balcony, arms outstretched as far as they go, teetering on the edge of danger to capture the best angle for Fuentes.

She announces one final song, and I wonder if she’ll make good on her goal to crowd surf crowd surf. Then, during the encore, she guzzles more champagne before pouring the rest of the bottle on her head, whipping her black and blonde hair around, droplets flying under the stage light. She slowly turns around, her back to the crowd, and falls, letting hundreds of hands carry her. She’s thrust back onstage, throws her hand into the rock on sign and leaves us with one final message: “I f*cking love New York City.”