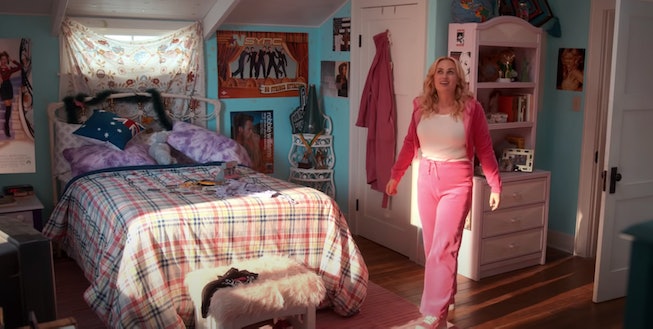 If given the chance, anyone who is sane wouldn’t go back to senior year of high school. But what if senior year took place in 2002, a time of peak Y2K bliss, a time when Britney and butterfly clips reigned supreme — and not like they do now, but for the first time, in their most pure iteration?

In Senior Year, which premieres on Netflix next month, Rebel Wilson plays Stephanie, a cheerleading captain with a hot puka shell-wearing boyfriend who had a perfect life until a cheer stunt gone wrong left her in a coma for 20 years. When she wakes up, she’s determined (as a 37-year-old) to go back to high school to finish her senior year.

“Everybody else has gotten to go on and live their lives, and what? I’m supposed to just jump forward? I mean, I just found out there are eight more Fast & Furious movies!” Stephanie says in the trailer. “I wanna go back to school, finish my senior year… High school was just like yesterday for me, it won’t be weird.” Elsewhere in the trailer, she picks up a copy of a Rolling Stone and says in disbelief: “Madonna’s now called Lady Gaga?”

Her parents kept her room a relic of 2002, which is covered with Britney Spears, *NSYNC, Pink!, and Clueless posters — and her closet remains an impeccable time capsule of Y2K fashion, with Juicy tracksuits, hot pink lace-up tops embedded with rhinestones and metallic heart chain belts — you know, what the best-selling items on Depop are now. Seeing an adult simply wear clothes from 20 years ago and fit in impeccably is a wild commentary on the trend cycle. Unlike movies like Never Been Kissed, where Drew Barrymore revisits high school and wears embarrassingly off-trend ’80s getups, Wilson actually looks like the best-dressed person at the school.

The film also stars Sam Richardson of Veep, Zoë Chao of The Strangers, Mary Holland The Woman in the House Across the Street from the Girl in the Window, Justin Hartley, who in this house is most famous for being the man who broke the heart of Selling Sunset’s Chrishell Stause, and the greatest Y2K icon of our time: Alicia Silverstone.

Senior Year premies on Netflix on May 13. In the meantime, you can watch the full trailer and count all the Y2K references here:

NEXT UP
Culture
Spice Girls May Reunite For King Charles’ Coronation
Culture
Loewe’s Howl's Moving Castle Collection Is An Anime Dream
Culture
The Madonna Biopic Is Being Scrapped
Culture
Kaia Gerber Won’t Stop Until She’s Cast As Patti Smith In A Biopic
Style + Culture, delivered straight to your inbox.