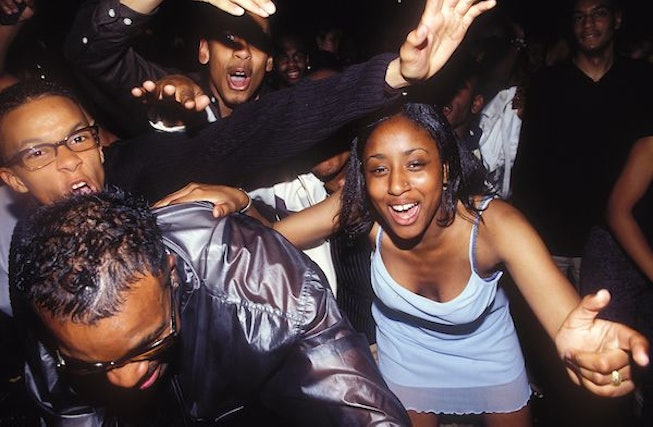 Resident Advisor was born in 2001 out of a love for dance music. Now, the site celebrates 21 years of club photography and storytelling in a new book. Sacred Space is a love letter to all things nightlife: The joy and ecstasy and lights and music; exploring what the “underground” means; the impact of nightlife on societal change; and the role of dance music and nightlife in forging community. It’s filled with odes to dance floors from New York to Detroit to Berlin to Kampala, with contributions from the nightlife legends, musicians, promoters, photographers, and clubgoers that breathe life into spaces, accompanied by rare club photography from the Museum of Youth Culture.

The first printing of Sacred Spaces just sold out from Resident Advisor for £29.99, with proceeds going to Museum Of Youth Culture, Bridges For Music and Choose Love charities. Each copy comes with an exclusive one-off, limited edition print by artist Jeremy Deller.

Below is an excerpt of “Small Footprint, Big Output” by Arman Naféei, the former musical director of the Chateau Marmont and The Standard Hotels, whose helped define the sound for brands like Chanel and Prada, with an essay about a visit to Berghain in 2003.

I was 15 when I first tried my hand on a pair of turntables, not knowing where the music would take me. Growing up in Cologne, I went religiously to Kompakt Records' weekly party at Studio 672, dancing to Michael Mayer and the rest of the label family when minimal was at its peak.

Not long after, I moved to London, experiencing the birth of electroclash and indie rock. I'd go to Nag Nag Nag at The Ghetto, Family and, most importantly, Erol Alkan's Monday night party Trash. Trash was my mecca and Alkan, mashing up genres and BPMs in a way I had never experienced before, taught me what DJing was all about. On the flipside, time spent in Paris at André Saraiva's Le Baron club showed me that you don't always have to be a technically skilled DJ to have a fun night. It was about the art of curation, reading the crowd and playing as if you were at a house party full of friends.

Then came my call to New York City with The Beatrice Inn — I call it my Mudd Club experience — and the Boom Boom Room, my very own Studio 54. I worked at the latter as the music director, leading me to the same role overseeing the André Balazs hotels, including the Chateau Marmont in Hollywood: Glamorous nights and beautiful mornings.

But for all the long nights, gigs, parties and events over the years, my most formative experiences happened in Berlin. From Berghain (FKA Ostgut) to Bar 25 and King Size, I was lucky enough to catch the end of Berlin's free and hedonistic mayhem. Nowhere in the world could compare.

One day in 2003, when I was 18, a bunch of friends and I squeezed into my car and drove the five or so hours from Cologne to Berlin. We were headed to Berghain, which was still fairly new, to catch Miss Kittin — the face of electroclash and one of the world's most in-demand DJs at the time. Berghain was well known, but by no means the institution it is today; it was just another great Berlin club. We got in pretty easily that night, probably because we arrived quite early. I vividly remember how mesmerized I was, walking into that venue for the very first time. It was otherworldly — cold, mysterious, dark and dangerous, but exciting as hell. "What is this place?" I thought to myself.

It was as if I'd stepped into The Wizard of Oz, but instead of Judy Garland I was greeted by thumping techno.

We spent the night sipping on Club-Mate waiting for Kittin to come on. I recall entering Panorama Bar and the feeling of excitement that rushed through my body, it felt as powerful as the machinery once housed in the former power station I was now dancing in. There were chains hanging from the ceiling, bright tiles on the walls, ravers dancing with abandon. When Kittin appeared, the room exploded; people were ecstatic. She was playing a banging set when suddenly the room went completely dark. The now infamous shutters — a new concept back then — opened very slightly.

It was an unforgettable moment. You couldn't hear or see one another and then all of a sudden, the room was illuminated. It wasn't the strobes or the lasers, but the light from the lightning outside shooting across the dance floor; the thunder was the techno booming from the speakers. Everyone in the room, including Miss Kittin, lost their minds.

At that moment I knew I was in the midst of a once in a lifetime experience. It's been captured in my memory ever since. We stayed a while longer, thinking 7 AM was a pretty good stint, only to be greeted, as is true to Berghain still now, by a queue of hundreds of people standing in the rain, waiting for their chance to try and get in.

My biggest take away from that special night was that implementing something small or simple can create extraordinary output. Berghain has no need for crazy lighting, table service, phones, social media, promoters, or egos. If you can create something positive, honest, and authentic, people will gravitate towards it. That in itself creates longevity and legacy. It's my mantra in my own work: small footprint, big output, with a goal of creating little pockets of joy for people to take with them for the rest of their lives.

Photographer Peter J. Walsh’s book RAVE ONE is out now.