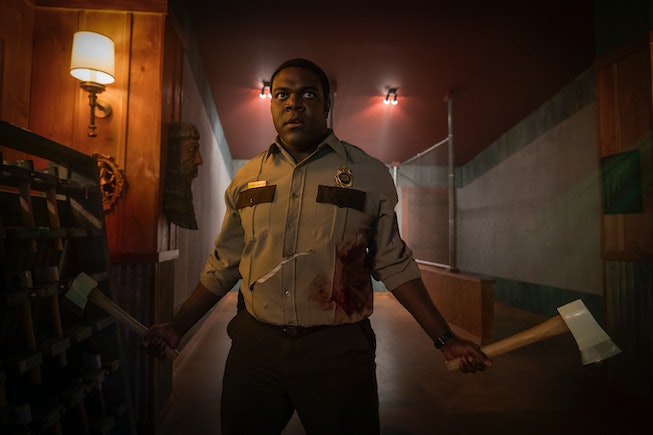 In whodunnit culture, the culprit at large can wield practically anything for destruction: a massive knife, a lead pipe, maybe even a candlestick if they’re feeling up to it. In Werewolves Within, the new horror comedy based in the sleepy, yet wacky-as-hell town of Beaverfield, guns happen to be more of an accessory than a murder weapon. “Out of curiosity, who is packing?” asks Finn Wheeler, played by Sam Richardson, as the safety of the town becomes increasingly precarious due to an unknown, potentially storybook-level murderer. Everyone trapped in the snowed-in lodge hilariously throws down their arsenal of firearms. Which is good, considering the basics of mythical creature lore: You’re probably going to need a silver bullet to kill a werewolf.

Directed by Josh Ruben and written by Mishna Wolff (and very loosely based on the video game of the same name) Werewolves Within winks its way through every goofy line and antic. The characters are delightfully absurd: a holier-than-thou tech money gay couple; a libertarian, misanthrope hunter; a shrill, craft-obsessed neighbor. There’s modern-day horrors, too, like Big Oil using every conniving trick in the book to establish a pipeline in Beaverfield and establishing a very real tension just as scary as a lycanthrope on the loose.

Werewolves Within is anchored by Richardson, who plays the kind-hearted and extremely polite park ranger new to navigating the increasingly alarming quirks of the town. Real heads will quickly draw the comparison between Finn and Richardson’s beloved Veep character, the guileless Richard Splett; Richardson is not above playing the asshole by any means, but he finds the intricacies of niceness to be just as rewarding. “You get to see villains like Cruella de Vil, she gets to twirl a cane and wear a wig and be like, ‘I'm nasty!’” he says to NYLON over the phone. “But I think there's also an equal amount of nuance through nice characters. You know, it's a yin and yang.”

In an era in which Hollywood would rather regurgitate the past, Werewolves Within takes the ultimate risk by having fun with being an original. The film is a true ensemble comedy gem and the perfect candidate for the return of a fun night at the movies, guts and all.

Werewolves Within is out now in select theatres and will be on VOD July 2. The following contains spoilers.

What's up with you right now? Where are you? Describe your surroundings.

Well, right now I'm at home in LA, but I'm kind of traveling back and forth between Atlanta. I'm filming a movie in Atlanta, but right now I'm in my nerd den in my office, surrounded by my toys and my computer. I built my own computer, it’s glowing blue. When I'm home and not traveling as much, I'll mount it to the wall, because the PC case, it's like a Thermaltake P3, so it's meant to be mounted. So, I'm excited to have it up there like a piece of art that's also like a super gaming computer.

Wait, so you’re a gamer? What do you play? What is your gaming life like?

I am a gamer. Most of my life right now is Call of Duty. I'm playing a lot of Call of Duty right now on PS5, not even on PC. It's crazy. I am also playing a lot of VR. A game that I was super into, but I'm trying to get back into and I just re-downloaded it was Titanfall. It's a super fun game. It's a first-person shooter, but it also has the element of these robots. So you're playing against a multi-player online. If I get people in and then you get the points, you can call down a robot to come in, like fight inside this robot, it’s so much fun.

It's terrific. My roommate and I, [comedian] Andy St. Claire, when we didn't have anything going on, we got a lot of free time. So we went from being just OK at the game to being two of the best in the room every time we're in a room, because we just played so much.

Gamers unite! I could talk to you about this for a very long time, but I also want to know about Werewolves Within, specifically what drew you to the script?

I've always been a fan of genre, you know what I mean? I love monster movies, love spy movies, love superhero stuff. I've always been super drawn to that. So this script I was like, ‘Oh, well, it's some sort of horror movie type thing, let me read this thing.’ I read it. It was such a cool and interesting mystery, and it was funny. And I really liked the idea of this character whose niceness is a fault and he's trying to overcome that.

And then, in the vein of Clue or Knives Out, there's sort of a grouping of these quirky characters that really drew me to that script. And I talked to the director, Josh Ruben, and I saw his previous film, Scare Me. And I was really excited to talk to him and to be a part of this for him to see what the vision for this was. Everything he said, I was like, ‘Oh, that's so exciting. That's so what I want to see in a movie.’ So wouldn't it be great to be part of this movie?

As you mentioned, your character Finn is so nice. And another one of your very beloved characters, Richard Splett from Veep, is also so kind-hearted. You seem to love these sort of sweet-natured characters. What is it about this type of comedy that keeps bringing you back?

Well, I tell you what, there's certainly something to the energy that you absorb and take on for projects. You're looking for traits you absorb, so if you are playing negative characters a lot, you are absorbing that. Am I saying that anybody who plays a negative character is doomed? Of course not, but it certainly does take a toll on you and you have to counteract that. So I like to be in that sort of world and play with that energy, but it makes me feel true. I'll play other things. I love to play assholes, too, because it's funny, but it's nice to fit in this world. It's nice to be a person who's nice like that, I appreciate it.

And with Richard Splett, it's fun to be an oblivious, guileless kind of character whose defining ride is always something nice. And with Finn, he's not guileless or at least he's not unwittingly guileless. There's a conscious effort to be nice. He's even like, ‘I know that you're taking advantage of me, but I still am going to be kind.’ I like those sorts of intricacies. And I feel that a lot of times, there's so much nuance to be put on nasty characters. And of course it's fun. It's great. You get to see villains like Cruella de Vil, she gets to twirl a cane and wear a wig and be like, ‘I'm nasty!’ But I think there's also an equal amount of nuance through nice characters. You know, it's a yin and yang. You can't have all on one side and none on the other.

This entire film is so funny, which made me curious about what was your favorite scene to film?

That's a good question. I think my favorite scene was the scene where we're confronting the hunter in this lodge and we are trying to ask him for help. We're scared the whole time. And he's walking towards us and we're like, ‘Oh no, no, no!’ Those sorts of levels were really fun to play. And the common timing. And I love a three-person scene very much. And then also the scene where I'm asking, if anyone’s armed, and everybody pulls out their guns.

You're a part of all of these iconic comedy ensembles. And I feel like Werewolves Within is definitely going to be another one of those. What was one of the funniest moments that you had with the cast, just goofing around?

We all lived in a place in upstate New York and we were staying in a lodge before it opened called the Urban Cowboy. And it's really fun, but it wasn't open. So we were the only people there. And we would just have these fun moments around the campfire or right around with big bonfires and just kind of laughing about that. Like laughing at how things weren't entirely ready without throwing shade at the Urban Cowboy, but very funny, parallel to being in a movie where you're in a lot of stuff together and then living that life at the same time.

Last question: Have you played the Werewolves Within game?

I love Werewolf and Mafia, but I have not played the Werewolves Within game. I'm kind of saving it for the day before the movie comes out and then I’ll play it on VR.