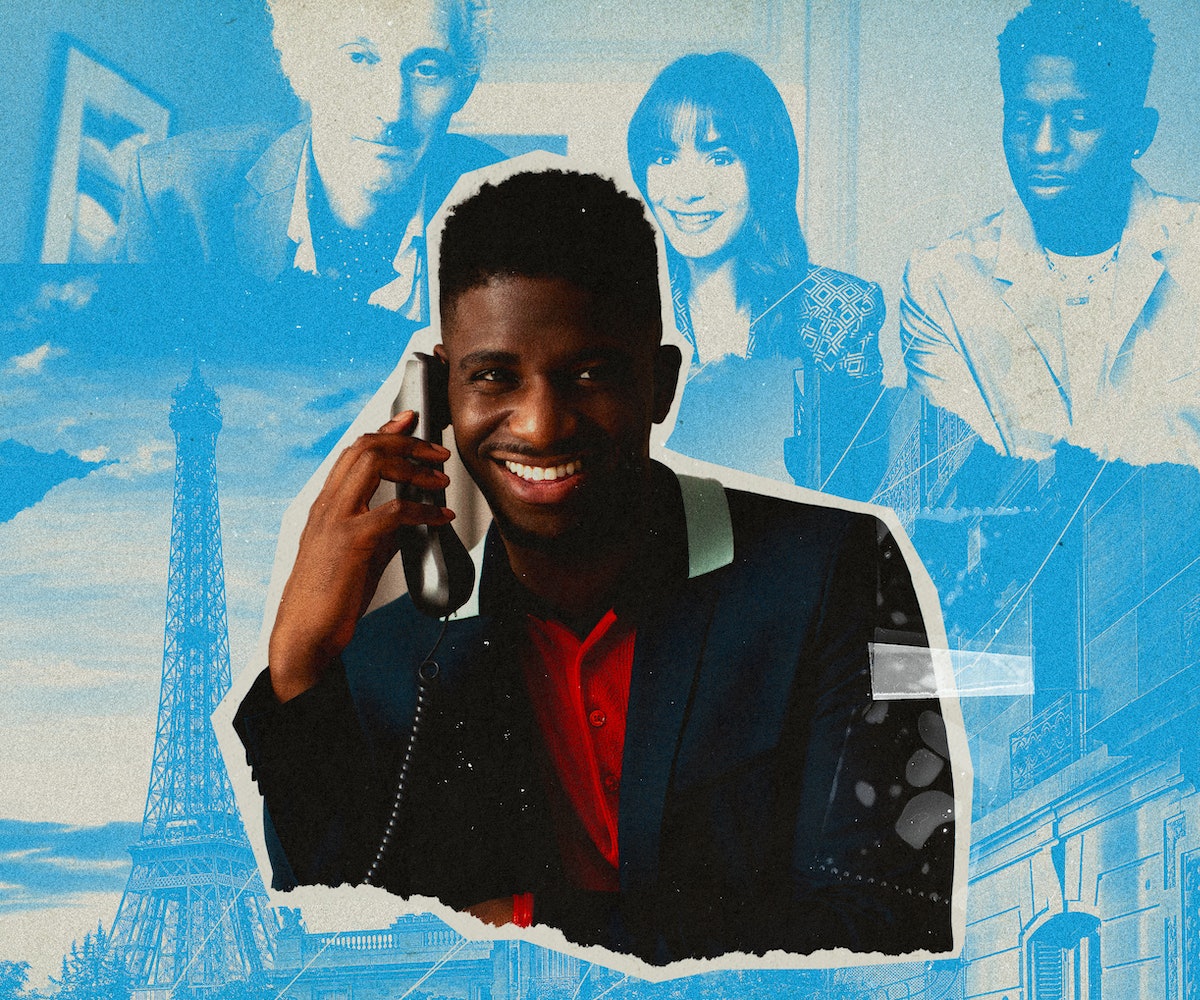 The following contains spoilers for Emily in Paris Season 3.

In Emily in Paris, Samuel Arnold bursts onto the scene as Julien, the titular character’s sharply dressed office gossip colleague who initially lives to remind her that she is une ringarde American. Over the course of creator Darren Star’s three frothy seasons and heavy press coverage, Arnold is frequently reminded of the show’s success and Netflix’s mind-boggling global reach. He feels it in London, where he lives; in countless international airports, where he’s recognized by fans; and during our lunch at Gemma, when a table of women across the restaurant — which happens to include Saturday Night Live alumna Nasim Pedrad — erupts in cheers and declarations of love for him. “That’s what’s crazy about this show,” he says once the excitement settles. “That all around the world, everyone knows it.”

Well, except for when he’s in his native France. “How can I say it in a nice way? French people are way more proud about anything. They’re too cool. They’d say, ‘Oh, you’re the guy from that show. Is it cool if I can get a picture for my sister, who she likes you?’” Arnold laughs. “Yeah, for your sister, right?”

It’s easy to compare Arnold’s personal style to Julien’s; for his ungodly long day of press, which included interviews on Good Morning America, The Drew Barrymore Show, a local radio station, and our lunch interview, he wore a two-piece set from Issey Miyake, complete with the Japanese designer’s signature pleats and pops of serene blue. But the surface similarities end there. Arnold operates on a completely different energy, one that’s gentle, and even a little shy, with no salvo of sassy comebacks up his sleeve.

As a latchkey kid growing up outside of Paris, Arnold was often home alone benefiting from his mother’s prudent technological savvy; she’d purchase VHS tapes to record whichever films aired on television, leaving Arnold and his elder sister with a locker full of movies. “That was my Netflix back in the day,” he says. “I would just binge-watch movies.”

His love of film grew into a desire to be an actor, one that became less of a pipedream in his teenage years. “Where I grew up, you don’t really think that you can do these things [like acting] because you don’t really have opportunities like that,” he says. “There was a man in my neighborhood teaching hip-hop dance to kids, and I would go to his classes since I was 7. One day he came and said, ‘Oh, the show France’s Got Talent wants me to participate, and I said that I will not participate without my youngsters.’” The instructor created a dance crew, and Arnold and his peers were off to La France a un incroyable talent, where they made it to the finals and began touring the country, many earning money for the first time as artists.

Things began to click. “I always wanted to be an actor because I was such a big fan of Will Smith and Men in Black and The Fresh Prince and stuff like that,” he says. “When I started to work as a dancer, I thought ‘Oh, but it is possible, so let’s get trained.’” Then came a test run at Parisian drama school, followed by a longer affair in London, with hopes of breaking into the U.K. and U.S. markets.

“I didn’t like the French industry at all, and I couldn’t see anyone that looked like me on French TV,” explains Arnold. “It is true that everybody’s put in a box, no matter where you are, but in France, the box is very small. Very, very small. I remember auditioning in London for a part in a classical play, and then the day after auditioning in Paris to play Slave No. 2. It’s literally written on paper for a ‘Black with an Afro.’ That was the name of the part and I’m like, ‘Nah, I’m not doing that.’”

Thankfully, with fate and talent on his side, he didn’t have to. His first major television role came via Emily in Paris, and his portrayal of the dramatic, glamorous, and quippy Julien earned him a breakout star glow. At the end of Emily in Paris Season 2, Emily’s French colleagues get in touch with their revolutionary roots and stage a coup d'état, leaving Savoir’s suddenly stifling American work ethic to form a new company. This season picks up in the aftermath of this crucial fork in the road; Sylvie is drowning in the bureaucracy of owning a business; Emily has bangs thanks to her frazzled emotional state; and Julien’s story gains some real world gravitas. His long-simmering, often one-sided competition with Emily to be Paris’ finest luxury marketing star hits a boiling point — and his potential exit from the newly formed Agence Grateau.

Watching Julien seethe as Emily clumsily tries to help stings as a viewer; even while rooting for Julien, it’s undeniable that she’s simply too damn good at her job of spinning crisis PR into gold, but that Julien’s turmoil is rooted in misunderstanding. While Arnold found it painful to act coldly against Lily Collins, it was a necessary evil to progress the plot. Arnold wants Julien to struggle for growth, but also to tell a larger story: one of a Black man winning in a space dominated by white people. “When people ask ‘When do we see his romantic life?’ I’m like, ‘I don't really want him to have a romantic affair, or whatever like that,’” says Arnold. “Emily is doing very well in that sense. If I had to choose, I’d rather him focusing on being the best marketing guy in Paris.”

Like Star’s most celebrated work Sex and the City, Emily in Paris — despite its deliriously, deliciously inane moments — is still more than a show about a workaholic Midwestern girl who is somehow always in a love triangle. “What is it to be a woman after 50? What is it to be a woman in the world we’re in and be sexually free? What is it to be a young, Black man working in an industry full of white people and trying to make it big?” asks Arnold. “You don’t see that at first. At first, you just see a romantic comedy in Paris and it’s shiny and it’s beautiful, but then you go deeper. And obviously it’s art and it’s free for interpretation, but I think there is a lot hidden inside the cute Emily in Paris.”

Emily in Paris Season 3 is now streaming on Netflix.