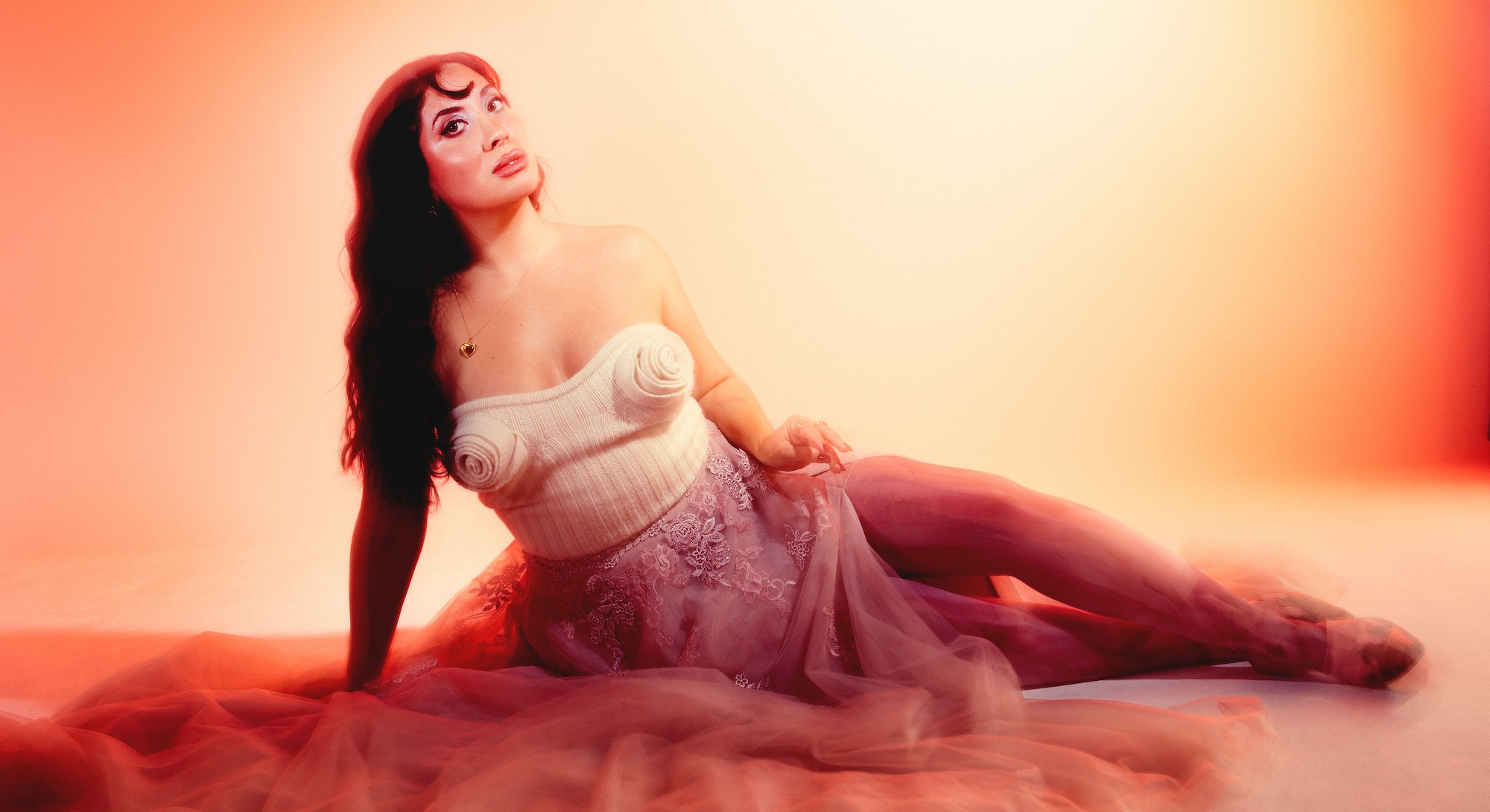 The popular artist is turning her attention to film, but leaves a legacy in her new book 'Dear Love.'

Sarah Bahbah is ready for a new era. For the last decade, the 30-year-old has been making art that’s as influential as it is personal, from the whimsical portraits of Australian teens at music festivals to “3ieb!” in Arabic / “Shame On Me!” in English, where she turned the camera on herself for the first time, posing provocatively to express her desire for sexual liberation from her cultural restrictions. Now, she’s saying goodbye to her photography days, at least for now — and ushering in a new one. And she’s saying goodbye in true Bahbah style: with a monumental art book called Dear Love chronicling not only her work over the last decade, but raw, autobiographical writing about her life.

Divided into four chapters across 420 pages and 600-plus photographs, the book covers Bahbah’s work across the themes “Dear Heart,” “Dear Darkness,” “Dear Light,” and “Dear Love,” featuring 20 visual projects. Bahbah has long pioneered a sliding scale model for art, and in keeping with her values, the book will be available on a pay-what-you-can model, from $60 to $300, with the minimum option designed for those who are unable to pay more.

Bahbah has been dipping her toe into video work for a minute now, having recently produced music videos for Kygo, as well as the short film “I ____ You,” and she says this medium is where her interest now lies – particularly, she’s interested in making long-form video work. But even though the medium is changing, Bahbah is interested in telling the same kinds of stories she always has: about love and a life without it.

“I think the book, or even the past 10 years has been, it’s almost like a master class of using art to heal,” Bahbah says. “I think I just want to expand on the journey I’ve been on and use the themes from my art to tell more stories around that.”

The book is gorgeous. Why did you want to come out with it at this time?

It’s something I’ve always wanted to do. I had it in the back of my mind at the start of my career that I eventually wanted to work towards creating this book. Every year I got closer to making it, but it didn’t feel like I had enough, because I always knew I wanted to create something that was autobiographical. I realized I’m coming to 10 years of photography, and I don’t have a book yet. It’s something that so many of my followers have asked for such a long time, and I'm moving into the film and TV space now in a really big way, and I’m not going to be shooting photography as much. It made so much sense to have this book be like the ode to my career in photography.

That makes a lot of sense. Your work is already really personal, but in this book, you're personal and honest in a totally unprecedented way. What compelled you to make it so raw?

I've had so many obstacles. Everyone does, but I needed to be able to truly release all the s*it that I've been through. For me the best way to do that is to just be open and vulnerable. I think when you allow yourself to access that really deep place inside of you, and there's a willingness to share it, there's a huge sense of release with that. I wanted to be able to tell my story in its most authentic way, and to do that I had to be vulnerable and really share some things that I didn't really necessarily feel comfortable doing at first. I had to reconcile with myself and those intrusive thoughts that have you feeling like, “Oh, you're being too much,” or “People are going to think you’re too heavy or too dark,” or whatever. I just had to fight through that because I think at the end of the day, emotional transparency and vulnerability does allow for true, deep healing and release.

How did it feel to revisit some of your older projects? Was it interesting to observe how you have changed as an artist?

What I noticed the most is that my work in the earlier days had a lot of ignorance and innocence because I started when I was a teenager essentially, or coming into my twenties. I still lived at home for some of the series that I shot. I was still living with my parents. Then you see the evolution from when I finally moved to another city and I started to reclaim my identity. I was finding art as a way to liberate myself sexually. It wasn't until I moved to Los Angeles and I got sober and started therapy that my work gets so much more intense. Going back and seeing that evolution has been quite a process for me, emotionally.

You talked earlier about moving more into film and TV. Do you think the book maybe symbolizes the close of a chapter or in any way, or a departure from a style or anything like that?

I definitely feel like it's the end of an era for me. I think I’m not going to be shooting as much, and I think I'm using long form film and TV now to really tell my story. My passion doesn’t really lie in photography anymore. As much as it's been such a big role in my life, I think, it’s never really been about the media in my use. It's always been about just being able to tell my most authentic story.

If there is a thesis that you know could come up with for your art over the last 10 years, what would it be? What do you think all of your photography work is trying to say?

It’s funny because my boyfriend and I were talking about this. It’s almost like a master class of using art to heal.

How has it felt to see how influential your style of art has been?

It’s always flattering, to be honest. It’s really nice to know that people are paying attention, and feeling inspired, and listening, and creating their own versions and their own stories. I can only say that’s flattering. In the past, I used to get upset when big commercial brands would mimic my art, basically identically, and then wouldn’t reach out to me to hire me for the jobs and whatnot, and would always just go for white photographers or white men, I should say. That was always upsetting. But now, so it’s whatever, it doesn’t phase me anymore. This is the industry we’re in.

What has been inspiring you lately?

That’s a good question. I'm stepping into this whole new world with the film and TV space; being given the space and the platform to tell a story in a new way is very, very exciting. I find myself completely wrapped in this world now of imagining my stories in long form, and it’s very exciting. I just feel like I’m creating on a whole new level.

Tell me about the sliding scale. I know that that’s been an important concept for you for a long time.

I released the sliding scale in 2020 during the pandemic. Prior to that, I had works that went for upwards of $5,000 through to $30,000 and it didn’t feel like my audience had access to it, so I wanted to create something that allowed for young collectors and art enthusiasts who don’t have the means to pay a high price point to have access to these pieces that they love and they share all the time. I offered a minimum of $50 per limited edition print because I wanted to make my art more accessible.

I wanted to make the book in the same model just because if this did sell at a concept store, or in a high-end bookstore, it would be around $300 minimum. It is a luxury book. It does have all the details that would classify it as a premium product. But again, I want everyone who loves my art to have this book, and I don't think pricing it that high is going to allow that opportunity.

Is there anything else that you want to add about the book or you want fans to know or anything like that?

I would just disclaim it’s not just a photography book; it’s autobiographical. Some of the written pages are quite heavy. Even though it looks like such a pleasant, light book and it has the themes of love, it mostly reflects a life without it. This book takes you on a journey from having experienced so many different lives, I would say... It’s a process. I think people who go through this book are going to go on a journey on their own, and I'm excited to see what everyone says.

Dear Love is available for purchase at dear-love-book.com now.