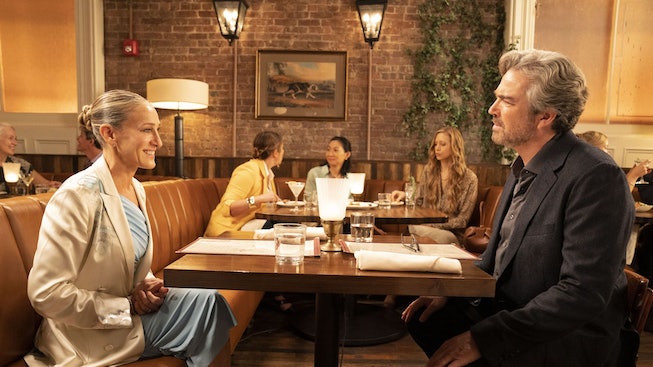 The Sex and the City reboot And Just Like That gets messier each week. This week, we’re talking about a literal mess of vomit, namely, Sarah Jessica Parker’s. Executive producer and writer Michael Patrick King went on the And Just Like That…The Writers Room podcast and shared that SJP projectile yacked for a scene in last week’s episode, after subjecting herself to method acting by swallowing two liters of fake vomit.

I will be forever grateful to And Just Like That for gifting our culture with the four words: “Hey, it’s Che Diaz,” uttered by Sara Ramirez playing “comedy concert” influencer, professional shotgunner, magic hands extraordinaire, too easy to hate character Che Diaz. But on Thursday, And Just Like That cemented itself as the gift that just keep on giving, with the glorious behind-the-scenes knowledge that SJP elected to drink liters of fake vomit.

In the episode, Carrie returns to dating after Big’s untimely end via Peloton. Only this time, she has to slum it on dating apps. She ends up meeting a widower named Peter (Jon Tenney). The two get plastered together, and their date comes to sharp close when they both throw up in unison in front of the restaurant. This would have been the most-talked about scene from last week’s episode were it not for the Che Diaz line, “Miranda I’ve done a ton of weed,” when Miranda asks them why they didn’t respond to her Instagram DM, a line I’ll think about every day for the rest of my life.

“The most challenging, complicated, scene was the vomiting,” said King on the podcast. “We thought they needed to have [vomit] rigs on them. [This] was a tube that went up alongside their mouth and was connected to a long tube that went under her dress or under his [Tenney’s] pant and down the street to two special effects guys that would then launch pumps of vomit. Then, they would try and turn their faces away from the camera so the vomit would be projectile.”

Apparently, even with all the HBO coin in the world, the vomit contraption didn’t work. And instead of doing literally anything else, SJP just chugged it. King continued: “They kept trying to tape these plastic tubes to Sarah Jessica and Jon’s face and finally Sarah Jessica said: ‘Fill up a liter bottle with fake vomit right now and take the tapes off, take everything away.’ It was crazy. What you’re seeing, there’s no special effects… She unloads one whole chamber of vomit, and you think that’s it, and then it’s like she has another secret chamber. That’s her New York City ballet training. Her diaphragm is so strong.”

It’s becoming more understandable by the day that Kim Cattrall would want no part in this, and I don’t blame her.