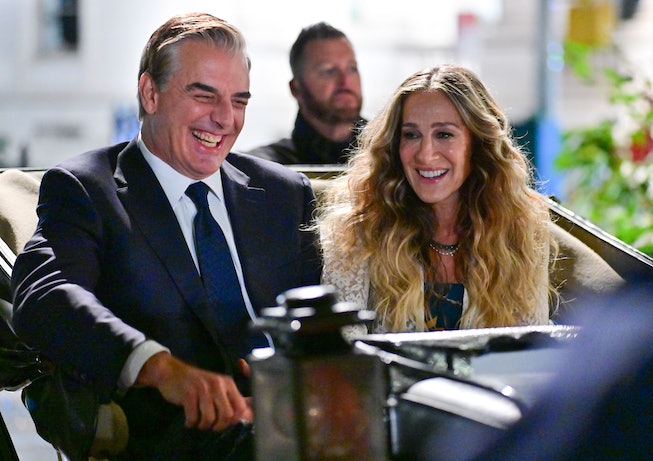 The following contains major spoilers for HBO Max’s Sex and the City reboot, And Just Like That. Please read at your own risk.

The Hollywood reboot industrial complex eventually comes for us all, and on December 9, the beloved characters of Sex and the City were resurrected for the highly anticipated HBO Max series, And Just Like That. A lot’s changed since we last saw Manhattan’s finest Gen X denizens; Samantha moved to London and is ignoring everyone’s calls and texts; Miranda devolved into a cringe faux woke graduate student; Charlotte is taking on the impossible task of being a perfect mother to two teenagers; and Carrie is now a podcaster. Oh, and of course, there’s Mr. Big, Carrie’s complicated beloved, who dies of a heart attack at the end of the premiere after a particular grueling Peloton class. Big’s final moments are one of the campiest things on television in a long time. Carrie literally says the words, “And just like that, Big died;” you have to laugh! Another reason to laugh? Peloton shares are taking a big hit after Big passes away.

And just like that, Peloton’s stocks dropped 11% after the episode, along with some hysterical statements from corporate trying to diffuse the bad press. Peloton’s spokesperson Denise Kelly confirmed to Buzzfeed News that although the company was aware that real-life Peloton instructor Jess King would be portraying a fictional Peloton instructor, they were blindsided by the larger context of the plot due to HBO’s strict confidentiality.

Whether or not the bike killed Big is actually discussed by the characters in the aftermath of his demise, which is even funnier and much worse for Peloton. The company’s a cardiologist and member of its health and wellness advisory council, Suzanne Steinbaum, issued a statement about how Big, a fictional character, actually had an unhealthy lifestyle that paved the way for his heart attack, and that viewers should keep in consideration before blaming the company that employs her.

"I'm sure SATC fans, like me, are saddened by the news that Mr. Big dies of a heart attack. Mr. Big lived what many would call an extravagant lifestyle — including cocktails, cigars, and big steaks — and was at serious risk as he had a previous cardiac event in Season 6,” she wrote. “These lifestyle choices and perhaps even his family history, which often is a significant factor, were the likely cause of his passing. Riding his Peloton Bike may have even helped delay his cardiac event."

Once again: You simply have to laugh!