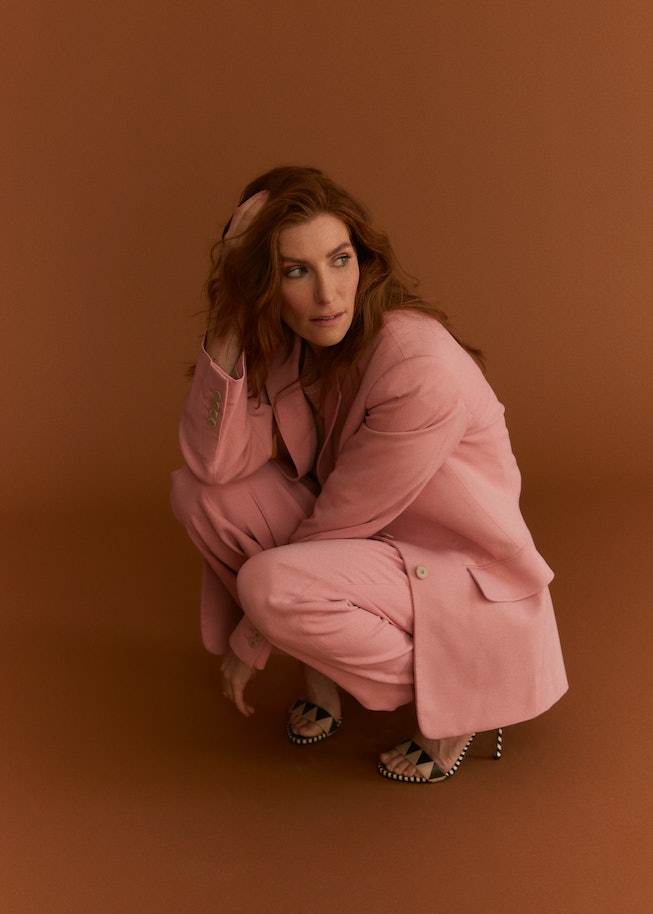 Coming off the colossal success of Schitt's Creek, Sarah Levy was looking for a different kind of role. The 34-year-old actor is best known for playing Twyla Sands, the town’s cheery coffee shop owner in the ultra successful show, which she starred in alongside her dad Eugene Levy, and brother Daniel Levy.

Now, she’s starring in SurrealEstate, a drama about a group of real estate agents who sell haunted houses. In many ways the show couldn’t be further from Schitt's Creek, although it also stars Tim Rozon, who played the rugged farm boy Mutt in the show. (Former co-star Annie Murphy texted Levy in all caps, ‘I’m so jealous’ when she learned the two would be working together again, she says.)

SurrealEstate is part procedural, workplace comedy, part Ghostbusters, part Poltergeist, and part thriller, but grounded with an emotional depth you never thought you could feel for real estate agents. Levy plays Susan Ireland, a career-driven, telekinetic, 34-year-old who, in her character’s words, is not in a relationship but is in an above prime mortgage rate. She doesn’t believe in ghosts but has to sell houses where they lurk, which Levy says gave her some meaty contradictions to work with.

Ahead of the show’s release, NYLON spoke with Levy about ghosts, what it’s like working with Rozon again, and how her life has changed since Schitt's Creek exploded in popularity.

SurrealEstate premieres on Sy-Fy on July 16.

How did this role come about for you?

I got an email from my agent requesting a taped audition. At that point, it was around May [2020] and it seemed like the entire entertainment industry had just poofed into thin air. No one was going into a room, so I taped this audition. I read the pilot and I couldn’t put it down and I felt like rarely does that happen to me, where I’m just page-turning and it was exciting, scary, fresh, and fun. I felt like the character of Susan Ireland sat really well in me, so when I put myself on tape for it, I figured, “Well who knows, this is always a crapshoot, but this feels right.” Two months later, I got a call saying I had booked the job and it had been so long and it was such a strange year up to that point that I almost forgot what exactly the show was, but I was so excited.

What attracted you specifically to this character? She’s very career-driven and also telekinetic, so she has this power but also has a lot of vulnerabilities. What was it like to take on a character that’s very different, but in some ways kind of similar, to a character like Twyla from Schitt's Creek?

You kind of hit the nail on the head there. I was looking ideally for a job and a character after Schitt's Creek that was very different from the show. This couldn’t be further from Schitt's Creek, which I loved and I was hoping I’d get that opportunity. On paper, the character of Susan Ireland is very different than the character of Twyla Sands. She’s a total workaholic, she’s a realist, she’s bright and professional. She’s always buttoned up, she cares so much about her appearance and how she’s coming off. She’s all about selling. She’s all about her job, and in ways Susan and Twyla do have a lot of similarities in that they’re cheerful; they’re bright; they want the best for people.

Susan is an empathetic person and she wears her heart on her sleeve and she isn’t afraid to be vulnerable, so I brought a little bit of those elements from Twyla. She’s telekinetic and it's a secret she's buried for a very long time. What I found that was interesting with her is that she’s a pragmatist. She doesn't believe in any of these things that Luke is bringing her into and yet she’s telekinetic, so the balance of figuring out: How do you believe in one thing, but you are something else? How do you marry the two? It ends up being this deeply suppressed secret that she hasn’t faced in a long time. It was a very fun line to walk.

Did you ever see yourself doing sci-fi?

Never and not that I didn’t want to. It just never occurred to me. I always wanted to do something horror, whether it was a horror movie or a series — I loved American Horror Story — I love the genre and I thought it would be so fun to do something like that. When this did come along, it felt like the perfect project because it wasn’t so dark. It wasn’t such a departure, but it at least kind of tickled that drama bone in my body of how to transition into something completely different.

One of your Schitt's Creek co-stars Tim Rozon is also in this show. What was it like to work with him in such a different role?

It was such a joy when I found out that I got the part in SurrealEstate and I was wondering who was going to be laying Luke Roman because that was obviously a character that my character would be working closely with, that I as an actor would be working closely with. You hold your breath and cross your fingers that the person who’s chosen is a really good person and is a generous person and actor and wants the best for his show and castmates.

I got a text from Tim saying, “I heard you were offered the part of Susan Ireland, I’m playing Luke,” and that sealed the deal for me. Tim is the utmost gentleman. He’s such a great actor. He’s so good in this and it was so nice to have familiarity on a set, especially going into a set during Covid, which I was a little apprehensive doing, but knowing that I had a pal and from a show that we just love so much. It felt like it was bittersweet wrapping Schitt's Creek, but at least I was able to take a little bit of it with me.

Obviously SurrealEstate is coming off the huge success of Schitt's Creek, which won nine Emmys. How has your life changed in the last six months to a year? What looks different?

So much has changed in that I felt like even pre-Emmys and, granted, we were in a pandemic as well so nobody was really going out, and the success of the show kept growing and growing and we weren’t going out and seeing anybody, so I don’t think any of us realized, except through social media and messages and seeing the show being nominated for things. We knew the show was successful, but it wasn’t until honestly things started lifting and we were going out in the world again that it felt like everything shifted.

I’m so aware now of people looking at me when I go out with my brother or Annie or anyone who's in town. Heads just turn and it’s been a shift that I wasn’t expecting in a way, because the success of the show happened way late and normally it's the beginning of the show when that happens. I think everyone’s still scratching their head and can’t believe how many people have seen it. Everyone has seen this show, it’s bananas. In terms of being out in public, everything has changed. It’s wild, but we have the best fans and everyone is just so excited. No one is disrespectful or rude. Everyone’s just so excited and has amazing stories about how it's changed their life or family’s, brother’s, sister’s life in stories of coming out and being more sensitive to somebody's story. It’s very heartwarming.

It’s a very vocal fanbase and as Daniel was saying to us when my dad and my brother had put out a statement saying the sixth season was going to be the last, the messages were basically like, “Oh that’s sucks but I understand, that’s okay!” Everyone is still so gentle and kind about it.

The setting of SurrealEstate is really beautiful.

We had the good fortune of shooting in Newfoundland. The landscape lends itself so beautifully to the show. Not only are you getting these stories, but you’re seeing these incredible places. In St. John’s, where we were shooting is notoriously haunted and nobody knew that until we got there. Everyone who’s a local has at least one story of a haunting or a ghost interaction and it was completely coincidental. But to that point, one of the bed and breakfasts that production was putting our guest stars in — one of our guest stars left and was like, “I have to get out of there. This place is so haunted that I have to leave.” So that also added to a crazy element of it. It was a very haunted city.

Oh my god! Did you ever feel or see any ghosts?

I was waiting to feel it in the house we were staying in. I was crossing my fingers, like please don’t let there be something, but a few of the houses that we shot in, there was definitely energy for sure. One of our guests stars who is very clairvoyant, where she can feel energy, like she wouldn’t even go into one of the rooms that was our green room. That was happening our entire shoot, so it was very interesting to be immersed in that.

But you do believe in ghosts?

I totally believe in ghosts. I think it is crazy to think that threat, or sort paranormal activity doesn’t exist in our world. It’s just unbelievable to me that it couldn’t be possible. That being said, I haven’t actually encountered anything that I know of, so we’ll see. That stuff fascinates and petrifies me at the same time. I don’t think I want to experience it, but I’m open to it.

Now that you’ve played someone who sees ghosts on TV, they’ll be after you.

Yes! Now I’ll be more open to it than ever.