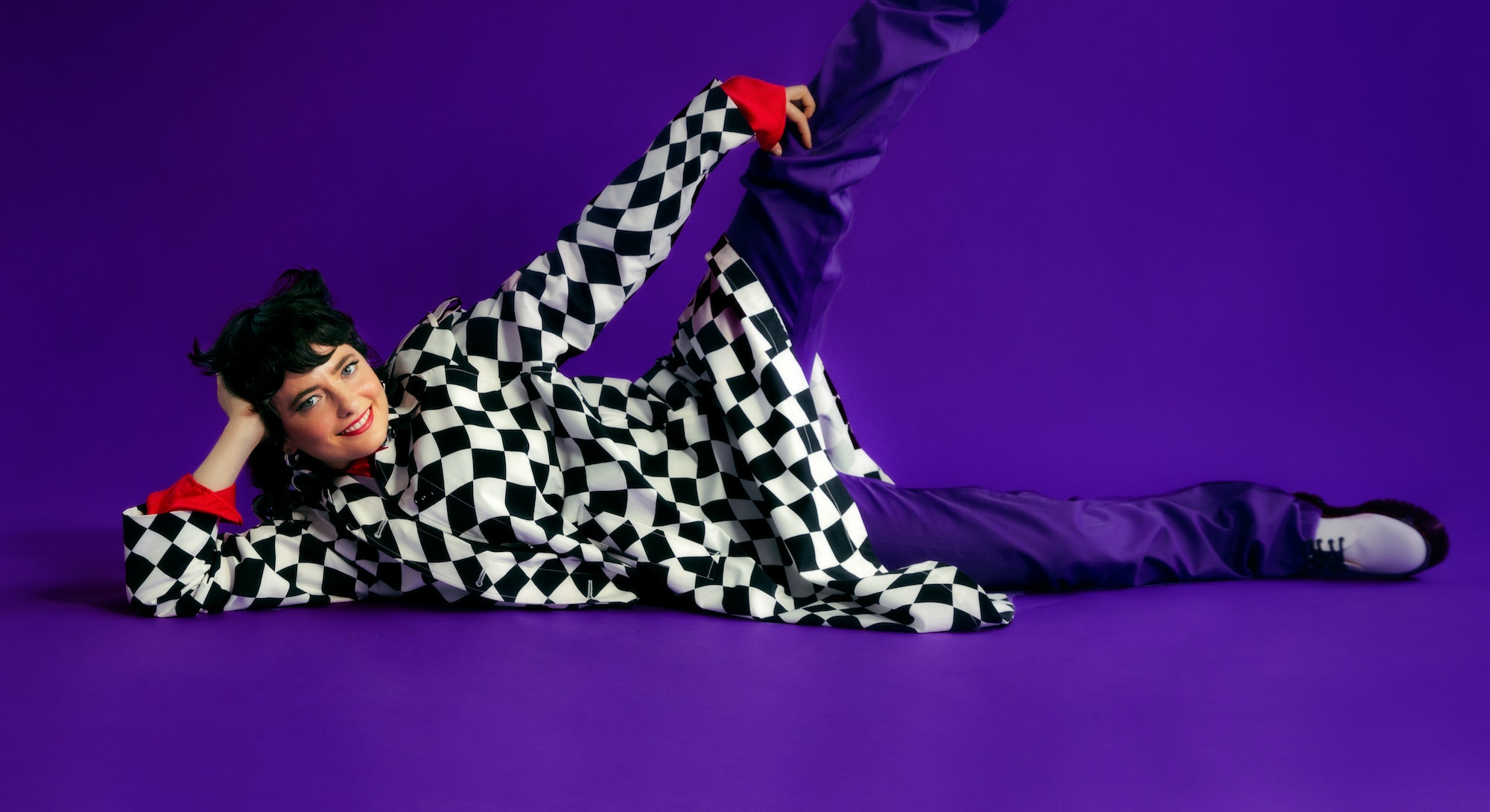 Say what you want about Chucky, the infamous redhead doll possessed by the homicidal spirit of a serial killer in the Child’s Play universe, but you can’t deny that he pulls off a look. Wielding a butcher knife in his toddler-core overalls, Chucky is one of the most iconic and recognizable figures in the horror canon. He’s also a role that Sarah Sherman, one of the newest cast members of Saturday Night Live, was born to play.

In a recent sketch, Sherman reimagines Chucky if he stopped chasing his tween victim Andy and started working in a high-rise office building at a nine-to-five. It’s a tale as old as time: Chucky’s stabbed a co-worker in the bathroom, and now HR is involved. Sherman cackles, hisses, and repeatedly stabs an exasperated HR representative (played by Jake Gyllenhaal) in the leg until the entire office explodes and sends Chucky’s head flying through the streets of Manhattan. The sketch feels like the perfect introduction to Sherman’s comedy stylings: an inimitable mix of gooey body horror, a dash of clownery, and the energy of a lovably abrasive Jewish yenta. And she’s only getting started.

“I got dinner with [comedian] Zack Fox the other day and I thought I was going to cry because he was like: ‘Sh*t man, if you can get on SNL, anything's possible, anything. It's like there's no rules. Everything's crazy,’” says Sherman over Zoom. “That's truly how I [felt] getting the job… There's no rules.”

Sherman may be new to SNL, but the Long Island native has long been a staple in the alternative comedy scene. Taking the route of many comedy greats before her, Sherman eventually landed in Chicago’s DIY comedy world after graduating from Northwestern. Without the “capital-I industry” of Los Angeles and New York City peering around every corner, Sherman (who also performs under the moniker Sarah Squirm) did open mics for five years and was able to hone her craft and let her freak flag fly.

She recalls a recent run-in with someone she used to know from her Chicago standup days. “I haven't seen him in seven years, he was like, ‘Dude, do you remember that time you got on stage and drank that clam chowder?’ And I was like, ‘Oh my God, I'm so glad that it was this Chicago street artist that saw that and not some CAA agent, or whatever.’ It made me emotional and I was like, ‘I can't even believe you remember that.’ He was like, ‘Yeah, it was disgusting.’” (The joke was that some women are a tall glass of water, while she’s a tall glass of cold clam chowder. “I don't know,” she laughs. “Not worth it.”)

While in Chicago, Sherman (alongside Luke Taylor, David Brown, Wyatt Fair, and Scott Egleston) developed the comedy show Helltrap Nightmare, the self-described “traveling freak show” that advertised with illustrated posters including, but not limited to: a hot dog covered in pubes, psychedelic caterpillars, and the tried-and-true classic butthole. During the summer of 2019, Sherman and her Helltrap Nightmare crew had a revelation. What if they took comedy seriously and made a living out of it? They decided to move to LA that October, only to be slightly derailed when Sherman secured a gig opening for Eric Andre on his Netflix special tour that exact month. Andre’s nationwide tour expanded Sherman’s reach, and after writing for The Eric Andre Show and Three Busy Debras, Sherman’s time in LA came to an end. Fast forward two years after her arrival, and Sherman was back on the East Coast calling Colin Jost a “local pervert” on Weekend Update.

Looking back on her first year on the show, which wraps its 47th season this week, Sherman is both thrilled and grateful. The show has offered her a plethora of opportunities: befriending the show’s fabricators and special effects artists, writing alongside fellow up-and-coming talents like Please Don’t Destroy, and crucially, an actual budget to make her freaky visions a reality.“[Writer] Dan Bulla saying, ‘OK, you're Chucky.’ I was like, ‘I feel seen, thank you. I feel supported.’”

Sherman teases what she hopes one day makes it to air: experimental body horror, “big, gross blood spray and vomiting” sketches that she’s figuring out how to nail for the live show. “I'm almost 30 and I've been doing comedy for so f*cking long that, I know exactly who I am, what I want to do, and it's not going to change. Like in the meatball sketch, I was a little raw meatball growth growing off the side of my own body vomiting black bile. That's what I want to do. And the fact that we've figured out how to put it on live network television is f*cking so cool.”

Sherman’s obsession with body horror is well documented both on and off SNL and goes back to the beginning: coming of age amongst the vicious body standards at the epicenter of Jewish Long Island. As a “hairy little Jew,” Sherman internalized the “brutal, medieval torture tactics” popularized within the ideal Long Island beauty standard. “Growing up on Long Island where there's 13-year-old girls getting nose jobs and doing laser hair removal, and that being kind of metabolized as normal, which is like, do whatever you want to do, I don't care, but we can all agree, it’s totally invasive, painful, brutal procedures. I got my first bikini wax when I was f*cking 12 or whatever because I had pubes before anyone else on the swim team.”

But it wasn’t all bad. Along with supportive parents, Sherman grew up watching Jewish sartorial maven Fran Drescher do it up on The Nanny. Armed with a dream and an aunt willing to drive her to Filene’s Basement, Sherman would scour the store to find something loud and tacky to add to her wardrobe. “And I just loved it, it was fun to wear a hoop skirt to school for attention,” she says. “It was a stunt, basically.” The duality made her the Sherman we see on air, and it’s clearly worked out; I’d like to see anyone else try and dress like “Chucky went to Sarah Lawrence” and make it work for them.

At her NYLON photo shoot, Sherman fidgets around with a baby pink heart-shaped ring on her hand from downtown New York designer Sandy Liang. It’s part Polly Pocket, part 25-cent machine jewelry at an astounding markup. You get the sense it’s very dear to Sherman, and you’re right; it’s a friendship ring of sorts, gifted to her by her friend and fellow SNL castmate, Aidy Bryant.

Sherman may have plenty of friends at 30 Rock, but her bond with Bryant is something special. “I would die without her basically. It's a big, scary place and no one tells you anything. You just show up. The first week, I didn't even know where the food commissary was because no one really tells you anything. She's the one who just told me everything and helped me out,” she says. “And she's just the funniest, best person ever. She's been there for 10 years and you think about like, She's been helping people there for 10 years. It's 10 years of emotional labor. She's been my angel.”

Just because Sherman is on network television doesn’t mean she’s not punk as f*ck, in every sense of the word. (At its truest form, at one point she lifts her legs onto her desk and rolls up her pants to show me her tattoo dedicated to the metal band Slayer.) There’s a shocking and confrontational originality to her that would be foolish to duplicate; not everyone can successfully pitch a sketch of a meatball vomiting up bile to Lorne Michaels. Lately, she’s been practicing Jungian dream analysis and familiarizing herself with the psychoanalyst’s archetypes of the unconscious. She knows the topic can elicit an eye roll from the naysayers, but she doesn’t care; her dreams and unconscious mind are proving to be an unfathomably deep well of inspiration.

“If you're only doing showbiz stuff and you're not having a real life, it's like what are you talking about during standup on stage? Because I'm working a lot and my life experiences are — seemingly for the past few weeks or so — limited to what happens at work,” she explains. “There is still stuff to mine. You just have to look within yourself. You know what I mean? It's all stored inside of there.”

Fears, doubts, hopes, possessed dolls, pimples exploding cottage cheese, Sherman on live television: anything in dreams can play out in the material realm. “I'm just trying to become more trippy and far out,” she says. “If I could expand my unconsciousness for the rest of my life, that'd be great.”