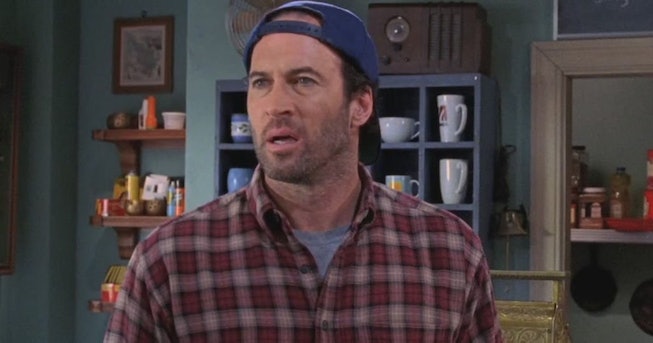 We’re in a golden age of reflection of our favorite shows from 20 years ago. Actors like Rachel Bilson of The O.C. and Jessica Szohr of Gossip Girl are revisiting the shows they starred in decades ago, sharing what really went on behind the scenes, with an unabashed freedom that only an expired NDA can inspire. But as stars rewatch their past work, some uncomfortable realizations have also emerged. It only makes sense that shows from two decades ago would not have aged poorly — both in content and in the treatment of actors.

Scott Patterson, who plays grouchy diner owner Luke Danes, who keeps Lorelai caffeinated and eventually marries her, has delved into his time on Gilmore Girls on the podcast I Am All In since its first episode aired in spring of 2021. On his latest episode, he revisits Season 3’s episode “Keg! Max!,” which aired in 2003 and includes a long bit about Luke’s butt after Sookie (Melissa McCarthy) accidentally grazes it — a bit that Patterson says made him uncomfortable.

He continued, saying he didn’t feel comfortable saying anything because he didn’t want to “make waves,” but that the scene made him feel like “some kind of meat stick.” To be fair, Luke was objectified, but most of the time it was in a female gaze way that appreciated his ability to wield a hammer as gracefully as a fry pan.

“It’s as disgusting for women to objectify men as it is for men to objectify women, and it’s as harmful,” he continued. “Just because it was 2003 doesn’t mean it was OK. It’s never OK, and I didn’t feel comfortable doing it, and it pissed me off. And I never said anything, so I was angry at myself for never saying anything. But I had this job, and I didn’t want to make waves and all that.”