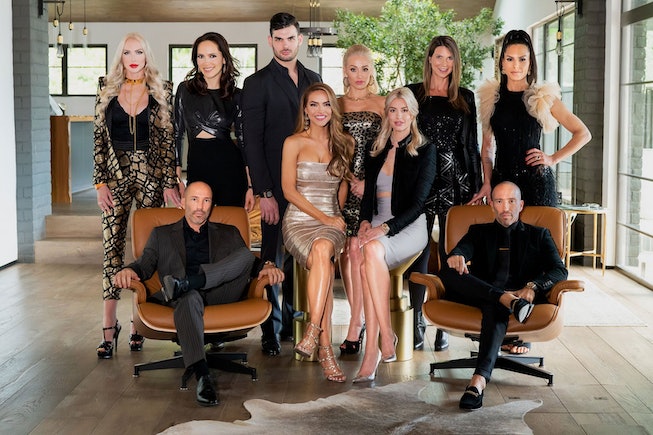 Netflix just dropped the official trailer for Selling Sunset Season 4 and finally announced an air date. The new season, which promises “a new baby, new realtors, and oh-so-many new feuds,” will premiere on November 24, just in time for your Thanksgiving break. If the trailer is any indication, we’re going to see a next-level rivalry between Christine and newcomer Emma Hernan, some skyscraper-high ponytails, and plenty of stilettos in construction sites.

Season 4 of Selling Sunset, Netflix’s luminous and frothy reality TV show about high-powered real estate agents selling gaudy mansions to Los Angeles elites, could not come soon enough. Last season left us with so many cliffhangers: Will Chrishell ever be okay after her ex-husband and This Is Us star divorced her over text? Will Davina ever sell that $75 million mansion or will she leave the Oppenheim group? Will Christine’s maternity outfits involve leather? Fine all the details you need to know about Selling Sunset’s upcoming fourth season, below

Filming started in May

Thankfully, the show has been renewed for Seasons 4 and 5. Filming was delayed over the course of 2020, but resumed in May 2021. Mary Fitzgerald confirmed with a photo of the crew back in the office.

In an interview with Showbiz Cheat Sheet back in June, Chrishell hinted that Selling Sunset would return within the calendar year: “I think I’m allowed to say we’re coming to your screens this fall. The summer months brought a lot of time to process what drama could unfold in Season 4, along with her and Jason’s steamy Italian vacation couple pics and the announcement of their relationship. Months later, Mary confirmed the November 24 release date on Instagram with a group photo — sans Christine!

Most cast members are coming back

Based on social media posts, we’ve got our favorite mains on board: Chrishell, Heather, Amanza, Christine, Maya, and Mary returning. It’s unclear if Davina will be back, especially because she was toying with leaving the Oppenheim group at the end of season 3 — but what about the $75 million compound and its weirdly sinister owner? Short king twin and Oppenheim Group co-founder Brett also left to start his own venture, so it remains to be seen how much we’ll see of him.

There are new cast members

Two new ladies are entering the cutthroat world of reality real estate TV: Emma Hernan and Vanessa Villela are joining the cast of Season 4. Villela is a Mexican-American actor best known for starring in roles in El Señor de los Cielos and Una Maid en Manhattan. She’s also a swimwear designer, while Hernan is a former model turned investor and CEO of a food company.

Chrishell, who was the newcomer to the Oppenheim Group in Season 1, threw a little shade at the cast members in an interview with Us Weekly, saying "They are in different stages in their real estate [careers] and obviously, it definitely stirs the pot a little bit. But I will say they're really lovely.” Can’t wait for the veterans to dish out some passive aggressive advice to the newbies!

Christine has something to say

As mentioned, Mary posted a group photo without Christine, which is something that keeps happening to Oppenheim’s star real estate agent. After worried chatter that perhaps Christine wasn’t going to be in Selling Sunset Season 4, she set the record straight with a video featuring the women doing what they do best — excluding her from a photo. “I'm SOOOOO tired of addressing this. I am in every single episode of season 4 and 5 of selling sunset,” she wrote on Twitter. “The girls intentionally leave me out of photos. I have real work to do besides sit on my phone and prove 24/7 that I'm filming a TV show. Yall going to see me.”

Bonus! there’s going to be a spinoff

Netflix also confirmed there will be a spinoff called Allure Realty, which follows follows an all-Black, all-women real estate firm on the Florida coast — but no word yet on a release date.