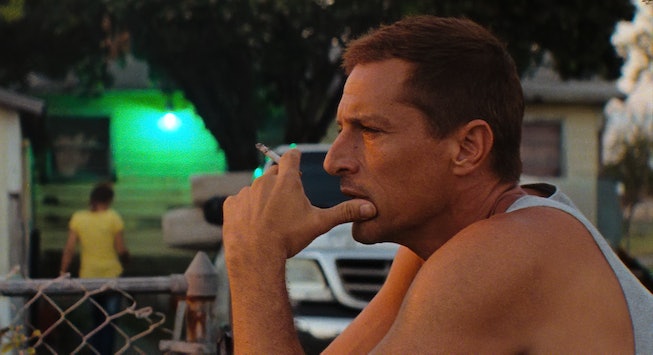 Saber is a charming degenerate, and thanks to Rex’s messy, wildcard magnetism, it totally works. The former MTV VJ-turned-actor best known for his rap persona, Dirt Nasty, bares himself, again and again, and it’s that magnetism that caught Baker’s attention. Rex had been making wacky videos on Instagram during lockdown when he got a call from Baker, who said he had him in mind for the role. He sent over some pages from the script, and within an hour, Rex had recorded an audition on his iPhone.

“Already at that point, the phone wasn’t ringing as much as it used to for work,” Rex tells NYLON. “I was like, ‘I’ve got nothing to lose; the world is ending, let’s go for it.’”

A few days later, Rex was in Texas ready to start shooting. The power of magnetism.

Sean Baker reached out to you with this role in mind. What was attractive to you about the role? Where were you at in your life and why were you interested?

I was just at a point where everyone was collectively in this weird place. This was July 2020; everyone was wondering what the f*ck is going on. Everything was locked down. There were riots and there was no work. It was just a very stressful time. Already at that point, the phone wasn’t ringing as much as it used to for work. When Sean Baker calls and wants you to audition on your cell phone and send it to him, you do it because it’s Sean Baker and you do it because he’s such a brilliant director. I jumped at the opportunity to work with him as soon as he hit me up. I was excited and flattered and read the script and was like, “Woah this is a great script.” It’s very vulnerable and I liked that. I was like, “I’ve got nothing to lose; the world is ending, let’s go for it.”

Your performance has so much energy. It’s energy that’s chaotic and sincere and just a really physical role too. Why is that energy important to the character? What was it like to unlock that?

Reading it, it’s just like he just goes on these rants, so you know it’s got to be fast. He’s a fast talking con man hustler. It couldn't be reading the lines this fast, like this [talks slowly] because then the movie would be seven hours long. It had to be ba ba ba – it's all energy and timing and pace and rhythm. I just went with my instinct and had fun with it. The writing of the script was pretty amazing, quite honestly, and that makes my job easier. I just had to memorize the sh*t out of those lines, because I couldn’t take a breath. It was just diarrhea mouth, not listening to anybody. It had to be that. There’d be no other way and Sean was like, “Yes you get it, that’s exactly it.” I think I just understood it and what it needed.

Is the script super thick then, for how long of a film it is?

For a comedy, yes it is a dark comedy, but normally a comedy would be 90 pages. This was probably closer to…I can’t remember exactly. Usually it's a minute a page, something like that depending on how much dialogue is on it. But yeah it’s a dark comedy, so you can get away with it being longer than 90 minutes. Most comedies have got to be pretty tight. Everyone’s attention span is so short, but this has got more to it: more nuance and grounded acting and real moments and drawn-out scenes, so it’s not just a comedy where it’s gotta be like that the whole time – it can slow down and breathe.

Your character is ruthless. He will stop at nothing to get what he wants. How do you approach bringing a humanity to that kind of character?

I just made him boyish and charming and likable as much as I could – and maybe he doesn't know what he’s doing. Maybe he doesn’t have bad intentions, maybe he’s just surviving and not thinking about how he’s hurting other people. So if he doesn’t have bad intentions, then you can kind of stay on board with him and he gets away with a little more. That little window is enough for the audience to stay on board and see what happens to him, because if he’s just an asshole and not likable, then nobody is going to care to see what happens with him.

There are very few movies or TV shows that can have a despicable character you want to keep watching that you want to root for. This is an antihero character study, so I just had to give that little bit enough for the audience to be like, “I kind of like this guy.” There's a scene in the script where he gets mad at them for doing drugs, so maybe he does have a moral compass. He gets mad at Lonnie for pretending to be in the military, but then he makes it about him. He’s like, “People know who I am; you don't do that around me. People recognize me,” and then you’re like, “Oh he’s just a narcissistic asshole,” so it kind of oscillates back and forth.

Do you have favorite antiheroes you brought into this?

A good one I just remembered was Bill Murray from Scrooged. He’s the worst guy ever and you can’t take your eyes off of him. Larry David: comedic, non-likeable person that just keeps saying the wrong thing and it’s so interesting to watch. Eastbound and Down.

I was gonna say, I got a lot of Kenny Powers in this film.

Can you talk about what it was like to work with the other actors? Sean famously casts first-time actors and Suzanna is a newcomer as well.

It was amazing to work with everyone because they were all happy to be there. Bree Elrod had been working in the theater scene in New York for years and is a blackbelt actor and just blew me away and made me raise the bar every time I worked with her. It was kind of intimidating when I first started working with her, I was like, “Oh my god, I’m boxing out of my weight class there. Not that it’s a competition, but she’s a much better actor than I am and I’m going to have to step my game up.” And on the other side of the spectrum, you have these local hires who have never been on a set before and I'm helping them understand when you say your line you have to stay on your mark, so I’m helping Sean with these first-time actors who are naturally amazing and have charisma.

I was in the middle of that and Suzy being her first movie, but she’s moved to LA to make it. She's obviously a star, you saw her singing and performing, she’s just amazing; she’s a talent, it was awesome. It was really fun to have the locals of Texas open up their doors and their lives to us and Sean would ask the locals like, ‘What would you say in this moment?’ because the actors would read the script and their lines and they’d be like, “We don't say that down here in Texas,” and Sean would be like, ‘Well how do you say it? Say it however you want.’ So Sean’s openness was really important. It added some authenticity. He let everyone be themselves and I just got to play in this world of real people around me in Texas, so it makes my job a lot easier because I’m really there smelling Texas, hearing it, the accents, people, the vibrations. It's not like we were on set in Burbank. It’s real.

I read that Sean just happened upon that doughnut shop? What a gift!

That was a happy accident. There were a lot of those that happened. In the script it was originally a taco truck or a food truck outside the refineries and he was driving around and found that place and was like, “Holy sh*t, we gotta use this instead.” He just happened to find it while he was location scouting.

Let’s talk about the era. Trump is heard on the TV so we know it’s right before the 2016 election but there is also a Y2K element with NSYNC's “Bye Bye Bye.” How does the era contribute to the story? Does it?

The song came out after the script was written and we were already shooting, so I think that just happened as we were shooting because Sean was like, ‘We need a song. What would the song be?’ and we were like, “Hit The Road, Jack” – it needed to be something that was part of the story because my character’s constantly getting kicked out of town and burning bridges and “Bye Bye Bye” just worked, so that just came about as we were shooting. Sean hoped we could get the song and clear it. It wasn't cheap. The powers that be saw a cut of the movie and were like, “Okay this movie’s incredible; we’ll pay for this song,” because it costs a lot of money.

As far as the presidential election, I’m speaking for Sean – he should answer this, not me but this is what he’d said in interviews, which is that it was a time where we were living in a reality show with the political landscape. Donald Trump winning, whether you’re on the left or the right, whatever your views are, it was crazy that someone like Trump was going to run against a woman for the first time and win and nobody believed he was going to win. It was like we were living in some weird reality show. That’s why in the movie, one scene would be a political debate and the next, it would be a reality show. He did that on purpose because we were living in this weird reality.

In one scene, you run naked through a neighborhood that apparently the movie didn’t have permits for. What is it like to work with Sean Baker’s DIY energy?

I wish that I could always do films like this. Of course, there’s gonna be big studio films and that’s its own thing, but to me, this is when the magic happens – when you work like this under stressful situations with not a lot of money. Everyone’s in it to win it, there’s no egos, there’s no big movie stars, and no producer over the monitor saying, “No Sean, you gotta do it like this.” He has a vision and he knows what he wants: writing it, directing it, editing it, casting it. He’s choosing the font on the screen. Just give him the money and trust that he’ll make a masterpiece.

When there’s not too many cooks in the kitchen this is what happens. That’s the problem: You get all these people with their egos and this and that and it’s not well-executed and it comes out being all f*cked up. All you need often to make a good meal is a few ingredients, like pasta. This is a lame comparison, but you just need some basil, some tomatoes, some pasta, and some meat sauce and if you do it the right amount with the right formula, it’s gonna be a good meal. You don’t need all this sh*t. It’s gonna make the meal suck, and that’s what happens a lot is there's’ too many opinions and everyone wants to have their vision in it. I think everyone suffers because of it, so I think it’s rare that this happens in a movie.