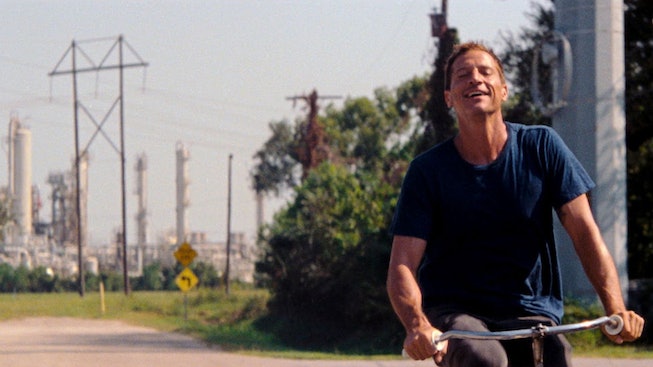 In the trailer, which is chock-full of gorgeous, moody shots from cinematographer Drew Daniels, who worked on Euphoria and Waves, Rex has to explain a 17-year gap in his resume, get sucker-punched, start hooking up with a much younger girl called “Strawberry,” who someone would enjoy describing as “not like other girls,” played by Suzanna Son and ride a bike down long dirt roads.

Rex told Yahoo News that Baker called him in October 2020 and convinced him to send him an iPhone audition tape with only five minutes to prepare. "I had never met him before but he was, like, 'I've been following your career for a long time and I need you to send me an audition right now on your phone," Rex said. He booked the role and drove to Texas to avoid having to isolate so he could start shooting three days later.

Red Rocket is the latest film to enter the Baker universe, a beautiful, raw, class-conscious, and sometimes gnarly place where colors are saturated and people are down on their luck, but real. (Really real: Baker often casts people he meets on the street to be in his films.) Baker’s debut Tangerine, about transgender sex workers in Los Angeles, was shot entirely on an iPhone, while The Florida Project, follows a young girl and her single mother living on the brink of homelessness in a motel in central Florida.

"Sean does a very good job in all of his films... where there are these 'deplorables' that society doesn't like, but he shines a light on dark subject matter and makes them likeable, real people," Rex told Yahoo.

Red Rocket is in theaters December 3. In the meantime, you can join me in rewatching Eastbound & Down, because who doesn’t love a messy redemption story featuring a formerly successful man who just can’t get his sh*t together? Watch the full trailer for Red Rocket, below.

NEXT UP
Culture
The 2023 Oscar Nominations Full List Is Here
Culture
Scream 6 Trailer Brings The Nightmare To New York
Culture
The Madonna Biopic Is Being Scrapped
Culture
Kaia Gerber Won’t Stop Until She’s Cast As Patti Smith In A Biopic
Style + Culture, delivered straight to your inbox.