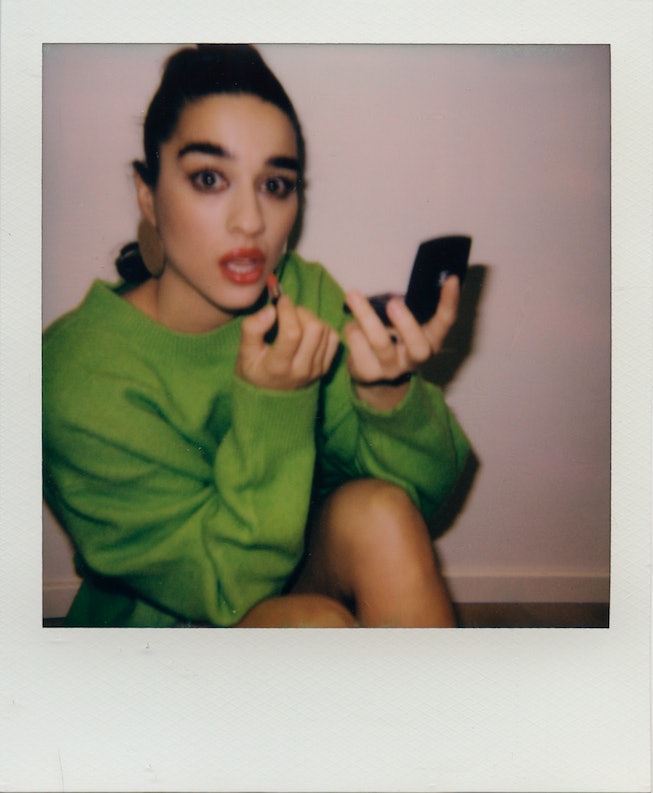 While the entitled guests of Sicily’s White Lotus resort get wasted off bottomless Aperol spritzes, humiliate each other during seaside terrace lunches, and harbor vague senses of ennui, Lucia, played by rising Italian actress Simona Tabasco, is running amok through the hotel’s marbled halls with her best friend Mia (Beatrice Grannò). Whether it’s a quick nap by the pool or charging glittery dresses to the card of her wealthy, serial cheater benefactor Dominic (Michael Imperioli), Lucia’s joy is boundless — and it’s all in the name of hard work. Lucia is a sex worker hoping to raise enough money to one day open her own clothing store. But unlike many a media representation of the profession, being a sex worker isn’t something Lucia is being forced into, but something from which she finds great power.

“You’re a business woman right? This is why they created hotels — to make money off the banks of girls like us,” Lucia tells the White Lotus manager Valentina (Sabrina Impacciatore), who is less than enthused about their presence. “Don’t be naive.”

Lucia and Mia are the lifeblood of the season; the scenes between them shine like coins in the Trevi Fountain. While everyone else runs around in upper class ennui in one of the most beautiful cities in the world, they’re the only ones who don’t take any of it too seriously. For Lucia, the White Lotus is a land of opportunity: for life, for joy, for pleasure.

Lucia’s energy is so infectious, thanks to the frenzied, effortless performance from Tabasco, who told NYLON that Lucia has rubbed off on her: She felt more energized for weeks after playing the role. But actors and their characters are inextricably linked. For Tabasco, bringing that energy and spirit was natural. Working on a project like The White Lotus, along with Gennerao, who she had been friends with for the last decade, was a dream.

“I feel different now, because it was a great human experience, and I feel I just want to celebrate this experience. The White Lotus changed everything,” Tabasco says from Naples, via a translator. “Can we repeat the experience five times or six times, or maybe seven?”

I would love to hear a little bit about how your life has changed since The White Lotus. It's such a huge show and your performance has been very celebrated. How have you been feeling?

I feel like I've changed and grown as an actress, because of the possibility that Mike [White] gave us of being able to improvise on set, but also being part of such a project with a series and a season that's so beautifully and accurately-written, and working with people that have such a clear vision of what they want to say.

You were a fan of The White Lotus season one before you auditioned. What did you like about the show?

What I like is how it shows the lives and the inner lives, especially, of these rich people who have their own imperfections and their own faults and their own flaws. It was great that the series and Mike wanted to show them in their human side, in their very relatable side to everybody else, especially because sometimes characters get idolized, but in this case it's the exact opposite. So Mike shows you these people and their lives and what they're going through, and possibly in the end you end up loving them for their human imperfections.

Did you ever think that the show would come to Italy?

I was not so much surprised that it would come to Italy, but very happy for two reasons: One because I think that Italy should be celebrated and through film and television and art in that sense, it's a great way to do that, but also because of course I was able to be part of it.

Do you think Americans’ fascination with Italy is reaching a new peak right now? It seems like so many people are traveling there.

I think there's always been, as everybody knows, a great deal of tourism coming to Italy from Americans and all over the world, but what I liked about the series is that it shows this five star extra-luxe resort, which is part of the reality as much as all the outdoor scenes that you see in all the outdoor locations we filmed at. Both aspects are part of Italy and what the country is. And so of course I do hope that the series does increase that even more and people get to see all of it as much as possible.

Lucia's an incredible character, so fun and headstrong and confident. How did it feel to play her?

So I believe myself, Simona, to be a very a energetic person. When I get to sleep, which is not always, but in that sense, interpreting Lucia's energy and all that she is, that was great because it helped me let that aspect of her character just be and express itself fairly easily. I think that an actor, however much they can study a character and dig into what the character is, you don't really go that far away. Because even though it is fiction, you are still interpreting it — so there's you that goes into the character. And that being said, of course we are different, I'm not her, and she's not me. But after playing her, my energy level for sure has gone up for some reason. I'm not sure why, but I feel even more energetic than I did before.

That makes sense to me; I feel like her energy and her drive are very infectious. You and Beatrice Grannò have been friends for years. How did it feel to get to play friends in the show alongside her?

We met 10 years ago at acting school, and then Bea went to London, and I've been in Rome for years. We got the request to send our audition tapes, and I wasn't aware that Beatrice was called for Mia's part. I called her to ask for some help to tape my video and she told me that she had gotten a request as well, so we started working on mine and started dreaming together and hoping that this would happen, but maybe not because it's such a big project — and then in the end it did. It was amazing because our friendship is real, it's something that we actually built. And it's not always easy with colleagues. It's not always a given that you build a relationship or a friendship. Sometimes there can be competition, there can be a misunderstanding, but with her, it's just pure true love between two friends. It was great and I think it showed on screen.

It definitely did. What was it like working with the cast? We are very big fans of Jennifer Coolidge, especially.

Yes, everyone is a big fan of Jennifer Coolidge, but honestly, everyone in the cast has been so wonderful. The thing I keep saying is that they've all been so welcoming and inclusive. And for me especially, which was the first time entering this sort of world, a world with Jennifer Coolidge and Michael Imperioli and all the others, it was maybe a little hard at the beginning because I didn't know what to expect. But then once it all started, everybody was so wonderful and it's an experience that I'll carry with me in my heart forever and ever.

Every time I saw Jennifer on set, I was like...she is amazing. She is incredible, an incredible human being. On my birthday, in my room. I was walking towards my table and I saw a big plant. I walk into my room and I see this big giant plant, a ginormous vase with a beautiful orchid, and a letter sitting right next to it. It was from her and she wrote me such beautiful words that I think I almost started to cry because it was such a pleasure to receive something from someone like her and to know I have her affection and her respect. It's something that definitely fills my heart with joy.

I love that. What kind of roles do you want to play next?

The first thing I thought of when you said that was the character that Rooney Mara plays in those trilogy movies, Lisbeth Salander [from The Girl with the Dragon Tattoo.] I would love to play something like that, possibly film or TV or whatever, but I'd love to have that kind of character thrown my way. And maybe also, I know I can't speak English very well, but I'd love to be the voice of a cartoon movie.