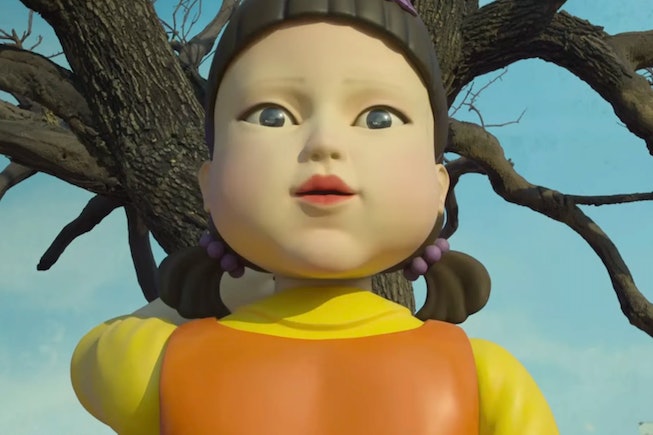 Netflix has already begun churning out teasers surrounding the release of the streamer’s smash hit series, Squid Game. The first, 10-second trailer focuses on Young-hee, the giant killer animatronic doll that appeared in the first game of the competition, “Red Light Green Light.” While there’s no official release date as of yet, the trailer also came with an announcement from Hwang Dong-hyuk, the creator, writer, director and executive producer of the series.

“It took 12 years to bring the first season of Squid Game to life last year. But it took 12 days for Squid Game to become the most popular Netflix series ever,” he wrote. “As the writer, director and producer of Squid Game, a huge shout out to fans around the world. Thank you for watching and loving our show.”

Hwang also dropped a few details on what to expect for Squid Game Season 2. The show’s main antagonist The Front Man (Lee Byung-hun) and protagonist Seong Gi-hun (Lee Jung-jae) are both set to return, and the new season will also introduce audiences to Young-hee’s boyfriend. Plus, the man who started it all could also make a reappearance: “The man in the suit with ddakji might be back,” said Hwang, referring to the game’s recruiter (Gong Yoo).

Squid Game was officially renewed for Season 2 last November. "There's been so much pressure, so much demand, and so much love for a second season,” creator Hwang Dong-hyuk told AP News at the time. “So I almost feel like you leave us no choice." He continued, saying: “It’s in my head right now. I’m in the planning process currently. But I do think it’s too early to say when and how that’s going to happen. So I will promise you this…Gi-hun will come back. He’ll do something for the world.”

Squid Game is the most successful Netflix series of all time — overtaking even Bridgerton since its premiere in September. The hype has simply not stopped: There are pop-up giant scary dolls across the world, cities are holding their own (non-deadly) Squid Games, LeBron James has his own opinions on it, and it’s only going to continue with a slew of tracksuit, stag mask costumes coming out for Halloween. (Unless you’re in New York City schools, where the costumes were banned due to the show’s “violent message.”) In the words of Squid Game creator Hwang Dong-hyuk in a new interview with The Guardian, “We are living in a Squid Game world.” Scary, but true! Dong-hyuk also confirmed he’s been in talks for Season 2 — but he’s got other priorities too: There’s a film he wants to make.

“Of course there is talk. That’s inevitable because it’s been such a success. I am considering it,” he said. “I have a very high-level picture in my mind but I’m not going to work on it straight away. There’s a film I really want to make. I’m thinking about which to do first.”

But we could get more from the director soon: Hwang has made three films in the last decade he’s now lobbying Netflix to screen. One of his films, The Crucible, also known as Silenced, became a major story in Korea in 2011. The film is based on a true story about a school for the deaf where students were sexually abused by teachers and administrators and inspired lawmakers to pass a bill abolishing the statute of limitations for crimes against minors and the disabled.

Hwang also did a little clap back at James’ criticism of the show. (He didn’t like the ending.) “Have you seen Space Jam 2?” Hwang said. “LeBron James is cool and can say what he wants. I respect that. I’m very thankful he watched the whole series. But I wouldn’t change my ending. That’s my ending. If he has his own ending that would satisfy him, maybe he could make his own sequel. I’ll check it out and maybe send him a message saying, ‘I liked your whole show, except the ending.’”

Despite Hwang’s success, he’s not sitting on a Squid Game-level jackpot, and the stress of making the show caused him to lose six teeth, he said in the interview. And despite the show boosting subscriber figures by $4.4 million, Netflix paid him according to the original contract. “It’s possible that I have to do season two to become as rich as Squid Game’s winner,” he said.

This article was originally published on Oct. 27, 2021