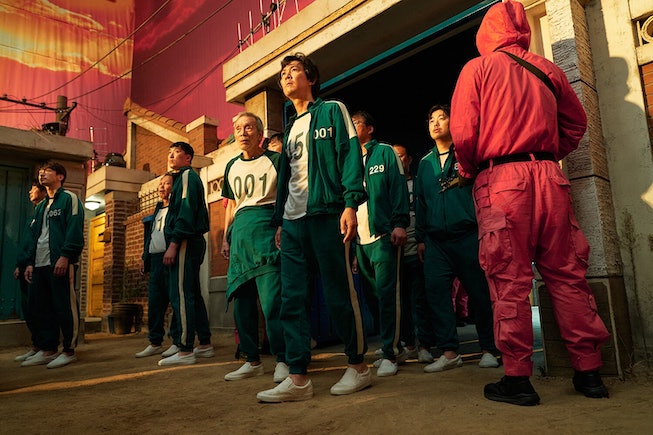 In Squid Game, Netflix’s wildly popular South Korean show, a group of people agree to compete in a series of deadly games in hopes of winning enough to money to pay off their severe, crippling debt.

But the scariest part about Squid Game — which kills off a couple hundred characters in its first episode in a brutally violent massacre — isn’t even the potential for death in the game: It’s that the characters are so deep in debt that they have no choice except to play. Even before they join the game, the stakes for debt are literally life and death with characters contemplating suicide, living in poverty, being hunted by loan sharks, and putting their organs up for collateral for debt they’ll never be able to escape. This is life and death debt — not racking up your credit cards for Chase Travel Rewards.

Therein lies the show’s brilliance. At the end of episode one, after witnessing a massacre of players who lost a game of “Red Light, Green Light” that nobody knew was going to be deadly, players vote on whether or not they want to keep playing. They vote to stop, and everyone goes home without much fanfare. It’s only then that we see the desperation that ultimately leads players back into the game: They’re facing a kind of death either way. They both have a choice to play and don’t because of the economic conditions that have contributed to their desperation.

Similar to how South Korean works like Parasite and Snowpiercer highlighted the country’s extreme income inequality, Squid Game, too, ruminates on the social stratification and varied experiences and circumstances of extreme desperation people experience in the face of the country’s household debt crisis. “The stories and the problems of the characters are extremely personalized but also reflect the problems and realities of Korean society,” Hwang Dong-hyuk, the show’s creator, told The New York Times in an email.

Squid Game offers characters at various levels of financial despair. There’s a Pakistani migrant worker, an elderly man dying of cancer, a business school graduate who siphoned money away and is being chased by the police, a North Korean defector wants to help extricate her mother and brother, and our protagonist Seong Gi-hun: a gambling addict who not only has loan sharks after his kidneys, but an ailing mother in need of emergency surgery.

South Korea’s household debt is the highest in Asia, and total amount of household debt doubled in June to the size of the country’s GDP: 1805 trillion won ($1.54 trillion) from what it was ten years ago. The top 20% of earners in South Korea have a net worth 166 times that of the bottom 20%, a disparity that has only increased because since the onset of the pandemic.

This all sounds bad, but of course, the U.S. isn’t on any high horse. The Gini coefficient, which measures the distribution of income across a population is actually better in South Korea than in the U.S., which is on par with Haiti, is likely one of the reasons why the show resonates so deeply here, too. In the U.S., household debt is about 78% of our GDP. Millennials and Gen Xers, in particular, face a crushing student debt crisis.

But credit card spending is a uniquely big problem in South Korea, where people can get astronomically high limits. According to Channel News Asia, credit card spending accounts for 40% of the country’s GDP, compared with 18% in the U.S. The report tells the story of a man with four credit cards that gave him a combined monthly credit limit of 60 times what he learned. He ended up 87 million won ($73,000) in debt in his late 20s.

And the same report says that more than 400,000 South Koreans are reported to be using loan sharks, and the estimated lending by loan sharks in 2018 was 7.1 trillion won ($5.8 billion). These numbers have real life and death consequences: Debt is also one of the contributors of South Korea’s notoriously high suicide rate.

South Korea announced new lending curbs last month — but analysts say a policy move like that just drives people to borrow from riskier sources like high-cost lenders. "I want to borrow more because everything's gone up, be it rents, stocks but my pay hasn't,” Joe Park, a 34-year-old grocery chain purchasing manager told Reuters. “I don't understand why the government doesn't get this."

In order to opt into the deadly game, the characters in Squid Game have to call a number on the back of a mysterious card handed to them. Netflix recently agreed to edit the phone number out of the show, after reports of people with that same, or similar, phone number being inundated with thousands of prank calls. While most people are probably calling because it’s funny, the darkest part of Squid Game is that some viewers might actually want to play.