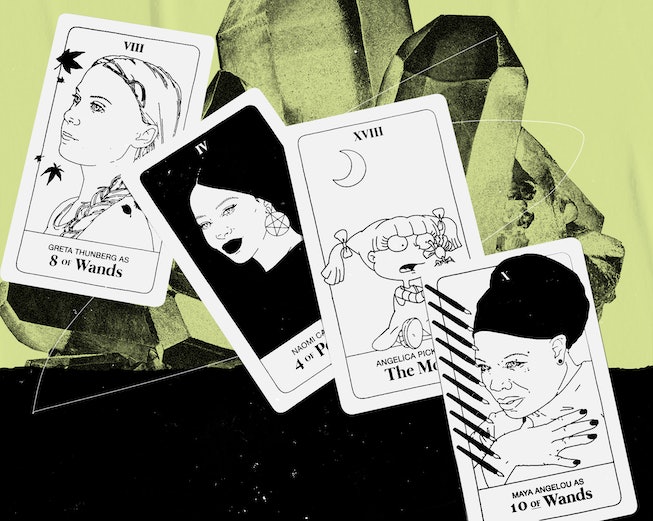 For many, tarot reading is a self-care practice that allows individuals to be introspective. Rather than something that “tells the future,” tarot cards serve as prompts to reflect on personal values and gain a stronger understanding of self. But, for a long time, tarot decks have only reflected a white, cis, and patriarchal vision of the world.

The deck—or some version of it—has been around since the middle of the fifteenth century when an artist called Boniafcio Bembo created the initial twenty-two cards for the noble Visconti family of Milan. And even though the deck has grown over the centuries to 78 cards, its most famous version, the 1910 Rider-Waite-Smith deck*, only represents white figures that conform to traditional gender roles. For instance, as Beth Maiden of Little Red Tarot explained, “the Lovers were always heterosexual, the gender binary would always be strongly enforced…I assumed it was down to me to do the translation.”

Despite this long-held visual tradition in the cards, the use of tarot in queer and POC spaces has been visibly growing over the past decade. Members and artists of the tarot community are consciously working to create more inclusive spaces that feature these voices, whether it’s through visual representation or approaches to readings. These different ways of combating the history of white supremacy and heteronormativity of tarot have been able to open up new avenues of healing and self-discovery for those within marginalized communities. This movement toward greater representation and deconstructing tarot, then, is the process by which POC and queer folks are able to find their lived experience more easily within the cards. As Maiden said, “It’s about making tarot your own.”

This has been true for many tarot practitioners and artists who are creating their own decks to reflect the communities they are a part of. Oubria Tronshaw, along with artist Julia Goolsby, created the Melanated Classic Tarot deck to serve a direct re-interpretation of the Rider-Waite-Smith deck. All the visual imagery of the traditional deck is there, but the figures featured are Black. “Visual representation is everything in tarot, as well as in life. Tarot is a micro of the macro; it is literally a series of portraits that represents wo/man’s journey through life experiences, from seed to labor to birth, in every way possible,” Tronshaw commented. “Color is important because I’m colored and I’m important, and when reading my own future I need to see my own self.”

So, she set out to create a deck that did just that. She sees the Melanated Classic Tarot deck as filling a void in tarot’s visual representation: “Black folks aren’t the alternative, we’re the standard, and we deserve tools that reflect that. Using another deck instead of melanating the Rider-Waite is like having to go outside for a place to sit when you can just order another couch.”

Faye Orlove, a Los Angeles-based artist and founder of the non-profit Junior High LA, created the Goddess Tarot deck by representing the meaning of the original cards through female public figures, real and fictional. Because the meanings of the cards can be abstracted from it’s imagery, she was able to then figure out who would embody each card’s story. The cards, for

her, represent concepts “without a gender, without a sexuality, without a race. It's an idea that anyone can connect to.” Strength, for example, is represented by Serena Williams, while Miley Cyrus shows up as Death because she embodies reinvention and major change. Other queer icons and women of color are featured including Roxane Gay, Cardi B, Alexandria Ocasio-Cortez, and Toni Morrison.

In a global context, practitioners are also working to put their own spin on tarot and decolonizing the practice. Chinggay Labrador, also known by her website Practical Magic, is a tarot reader based in the Philippines who has also come out with decks of her own. The Philippines has its own colonial history—it was occupied by the Spanish between 1521 and 1898—so tarot is a “blend” between the country’s pre-colonial spiritual practices and the Roman Catholic tradition that remains because of its occupation. Labrador, on the other hand, calls her practice “secular,” as she uses it to “help build self-awareness” both for herself and for her clients.

Alongside these creators, there are those who are actively reckoning with the way that people approach tarot reading and curation. Maiden is an author in addition to owning Little Red Tarot, a UK-based one-stop-online-tarot-shop that stocks both the Melanated and Practical Magic decks. She is also one of the few tarot shops that is so transparent in stocking decks that reflect the artistry of folks from diverse backgrounds.

“Over time I realised how important and empowering it was for me to see queer life and love reflected in my cards. The first few times I had the experience of actually seeing myself in the tarot were really emotional and exciting,” she recalls. “This naturally led to seeking out other kinds of representation— POC in particular, but also looking for decks that simply make space for diverse bodies, and decks that align themselves with progressive leftist politics and explicitly talk about social justice and liberation.”

Maiden is currently working to create a curation practice for her shop that promotes collaboration with the larger tarot community while challenging capitalism and white supremacy. Her own experience with seeing herself visually in the cards has moved her to center her mission of increasing representation in tarot—not only is it a point of inclusion, it's a springboard for liberation.

For these artists and practitioners, the importance of tarot lies in its ability to serve as a grounding mechanism for uncertain times. And, given the crazy time in which we’re currently living, tarot can serve as a stabilizing force for those who are called to the practice. Maiden has just the words to describe the possibilities of tarot during this time: “Tarot offers us an anchor and a witness, space to pause and reflect and return to centre, and just as importantly it pushes us towards better listening, better showing up, better allyship.”