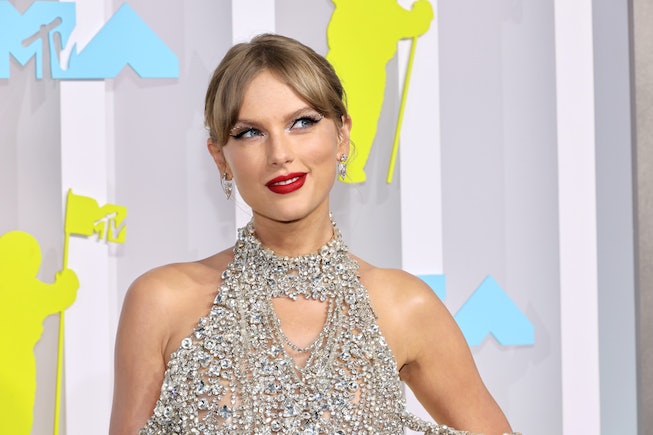 Taylor Swift loves to out-do herself, so when she released an entire short film for “All Too Well” (10 Minute Version) (Taylor's Version) we knew we were in for a treat. The video, which starred Stranger Things actress Sadie Sink and Dylan O’Brien as the song’s star-crossed lovers, brought the fan-favorite track to new heights — and snagged Swift five nominations at the 2022 MTV VMAs. Not only did it go on to win Best Longform Video and Best Direction, but it also won the much-coveted Video of the Year. But as mentioned, the woman loves to out-do herself, so she took the opportunity to make a major announcement: Her new album is coming in October.

“I’m so heartened by the fact that, for the first time in VMA history, four of the directors in the Video of the Year category are women,” Swift began. She continued to thank her fans: “I wouldn’t be able to re-record my albums if it weren’t for you. You emboldened me to do that.” And then as if Swifties weren’t already overjoyed, she announced that her new album was set to drop in October. Classic Taylor!

As promised in her speech, more information was dropped at midnight — specifically that the album name is, well, Midnights. “Midnights, the stories of 13 sleepless nights scattered throughout my life, will be out October 21. Meet me at midnight,” Swift wrote in a caption, alongside an image of the album cover and a mysterious tracklist (for now, all we’ve got is Track One, Track Two, et al.; there will be, of course, 13 tracks in total.)

The Instagram post also featured a second slide, giving slightly more context about what we may have in store for us. It reads:

“We lie awake in love and in fear, in turmoil and in tears. We star at walls and drink until they speak back. We twist in our self-made cages and pray that we aren’t — right this minute — about to make some fateful life-altering mistake.

This is a collection of music written in the middle of the night, a journey through terrors and sweet dreams. The floors we pace and the demons we face. For all of us who have tossed and turned and decided to keep lanterns lit and go searching — hoping that just maybe, when the clock strikes twelve... we’ll meet ourselves.”

Here’s hoping for another sad girl fall, courtesy of Taylor.