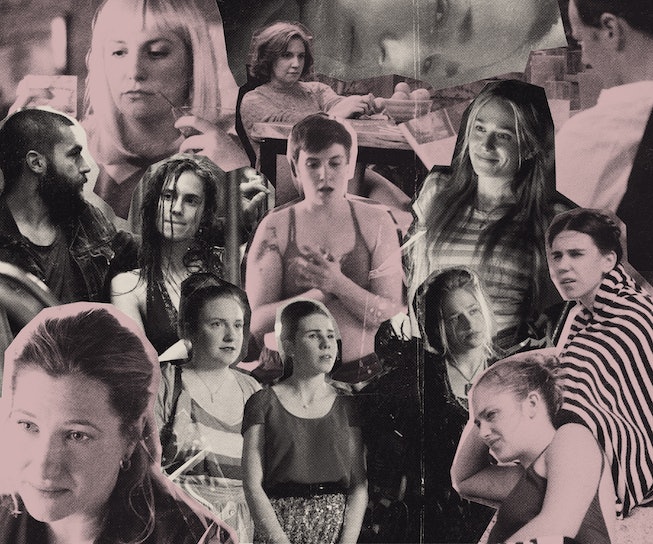 Just two years after Betty Suarez had left New York and Carrie Bradshaw had decimated Abu Dhabi, and one year before the women of Orange Is the New Black would start the streaming revolution, HBO brought forth a controversial, indelible phenomenon. Girls was not like any other show that came before, and is uncanny enough that it can never be replicated. Even now, when every so-called auteur and indie comedian has their own shaky-cam, punishing prestige drama, few have matched the uncanny style of Lena Dunham’s vexing, mesmerizing dramedy. What started out as a show about a group of four friends drifting around Brooklyn through their post-collegiate 20s became an ongoing experiment on sexual provocation, self-sabotage, and the death of dreams.

The tone of Girls varied wildly, from bitter satires to Felicity-style heartbreakers. Often, the show struggled with the 10-episode sitcom format; the even-numbered seasons felt particularly rushed. But the limits of serialization often forced Dunham, along with co-creators Jenni Konner and Judd Apatow, to get creative. Before bottle episodes became a fate worse than death, Dunham deployed them as short movies, breaking up the seasonal march to expose her characters in a new way.

Some of Girls’ best episodes were self-contained mini-masterpieces, while others showed off Dunham’s savage writing and characterization when applied to a serialized structure. Some seasons, like the third and fifth, are so seamless as to feel like complete creative statements; their best episodes don’t stand out, so much as serve the greater whole. And even in Girls’ more frustrating seasons, all it would take was the right rant from Ray, or guest appearance from Natasha Lyonne, to make you fall back in love all over again. Here’s our picks for the definitive Girls episodes, whether you’re in for an auteur’s bottle episode or just a good time with the girlies.

Hannah departs the chaos of Brooklyn for the languid charms of suburban Michigan, where her parents — and her past — await her. For anyone who has left home to make it in the big city, “The Return” captures the hypnotic allure of giving up the grind and walking among the mortals. “You are from New York,” Hannah says to herself in the mirror, dressing in her childhood bedroom for a date, “therefore you are naturally more interesting.” Hannah peers into another life, in which she could be nourished by her parents and worshiped by a hot local pharmacist (Lou Taylor Pucci). But could she live with herself? Girls never grants Hannah the career glory she so desires; her most profound revelations come when she succumbs to the specter of a traditional happy ending. But this early in the saga, who would she be without the mission?

Season 1, Episode 7: “Welcome to Bushwick a.k.a. The Crackcident”

Depending on your age, “Welcome to Bushwick” either inspired you to move to Brooklyn or captured your experience of the bygone warehouse rave era. Weren’t the Obama years quaint? With this episode, Girls left Sex and the City and Gossip Girl in the age of flipphones, throwing the biggest party we’d see until the Euphoria teens showed up with the meth. Drama, dancing, farce, and violence coalesce perfectly, as Britney Spears and Dragonette boom in the background. A new decade had begun, and this was how we were going to party. Airing on the same night as Game of Thrones’ “Blackwater” and Mad Men’s “The Other Woman,” “Welcome to Bushwick” felt like the herald of a new storytelling era.

The dreamy innocence of Season 1 comes to a sharp end here, as the girls are forced to take accountability for their reckless myopia. But the confrontations between Katherine (Kathryn Hahn) and Jessa, and Hannah and Marnie, never go into moralistic territory: Everyone is flawed, blind to their own cruelty. “Leave Me Alone” has some of the series’ sharpest lines (“Did I ever tell you I went to the stupidest summer camp? Well, I did.”), deploys guests Jenny Slate and Michael Imperioli to perfect use, and feels choreographed like a musical. Though Hannah’s self-sabotage would become far more theatrical in later seasons, her self-immolation here, at the first opportunity for literary acclaim, feels real and tragic. “Leave Me Alone” introduced consequences for its girls, and their warped reactions were never more relatable.

The Grindr hookup that takes you into a different socioeconomic strata. The one-night-stand that makes you forget your whole life. “One Man’s Trash” was a portal, out of the show and the confines of serialized storytelling, through which Hannah could lose and rediscover herself. In the brownstone of a wealthy, stacked, all-American older lover (Patrick Wilson, reprising his cracked prom king of Little Children), Hannah must face her greatest fear: a life in which she doesn’t have to be interesting. “I made a promise,” Hannah confesses, “that I was gonna take in experiences, all of them, so that I could tell other people about them and maybe save them. But it gets so tiring.” By episode’s end, the door has closed and Hannah has returned to the hell of her choice. But there could be no doubt that the character, creator, and series were capable of great metamorphosis. This show would never be predictable.

The series’ darkest episode is a reckoning with annihilation; what once were childish quirks in the characters have fast fallen into destructive behaviors. Hannah spirals into an OCD meltdown; Adam indulges in alcohol and a dangerous shadow self, with his girlfriend Natalia (the luminous Shiri Appleby); and Marnie humiliates herself with the most cringe-worthy performance in television history, a slowed-down cover of Kanye West’s “Stronger.” In its best moments, Girls refused to judge its characters, staying with them at their ugliest. For its depiction of complicated, destructive mental health and sexual expression, “On All Fours” could never be made in 2022. As such, it still feels rare, dangerous, and true.

It’s impossible to pick a favorite episode from the show’s breeziest season, which introduces Gaby Hoffmann and Patti LuPone into the proceedings. But “Beach House” was made to be re-watched over and over again; there’s no better fodder for comedy than the jacked-up expectations of a Hamptons weekend. Of course, anyone who’s endured an ill-fated friends’ trip will recognize their own behavior in the fast-melting house: Marnie, the fascist; Hannah, the traitor; Shoshanna, the cruel drunk. The tension explodes in a dance and a fight, and the episode ends with the four girls, scorched and wasted, waiting for the bus home together. It’s a good thing they got all that out of their systems.

Girls’ most consistent season breathes air into Hannah and Adam’s relationship, and for the most part, we see two people growing together in a healthy way. But as Adam’s career picks up, Hannah’s anxieties creep back in, and the doomsday clock starts ticking. Of all of Girls’ deranged sexual scenarios, Hannah’s seduction of Adam, while in the guise of a “married slut,” may be the most mortifying — and entertaining. But as the frenzied, performative sex melts down, so does Hannah’s resolve, leading to one of the show’s mostly finely written and acted confrontations. Dunham and Driver drive it out of the park once again, along with special guests Richard E. Grant and Felicity Jones, who bring Jessa’s cocaine bender to a sharp and poignant end. Sometimes you have to get left behind to start over.

Girls’ fourth season is its most scattered; the show seems to drop its focus on the characters’ development, distracting them with new and vague romantic foils (remember Zachary Quinto as Ace?). Let our girls grow up already! The finale picks up the pace and puts the girls back on track toward evolution: Shoshanna takes on a new job in Japan; Marnie takes center stage, without Desi; and Ray speaks up for his feelings. Meanwhile, at Laird’s, Caroline’s home birth goes awry, and Jessa, Adam, and Hannah must wake up from their malaise and save the day. Gaby Hoffmann’s moans of labor are far more satanic than anything Suspiria could cough up, and Jemima Kirke, tying up her hair and getting to doula business, is inspired. “You guys are all pussies, every one of you!” With birth, comes awakening. Hannah is ready to move on from Adam, Jessa wants to become a therapist, and Girls is back on track again.

One of the best developments of the series’ latter half was its investment in Hannah’s parents, Tad (Peter Scolari) and Loreen (Becky Ann Baker), and the dissolution of their marriage. Hannah and Loreen venture to a tyrannical women’s spa retreat to make sense of their relationships — Hannah questioning her connection with uptight Fran (Jake Lacy), and Loreen wondering if she should stay married to a gay man. Meanwhile, Shoshanna comes down from the high of Tokyo, awakened to her homesickness by game guest star Aidy Bryant. In one of the series’ most devastating sequences, Shoshanna walks in a daze through an unforgiving foreign city, and Loreen strokes Hannah’s hair, giving into a hopeless future: “If I had known, 20 years ago… maybe.” Girls never promised its characters happy endings, or even closure. In leaving Loreen, Hannah, and Shoshanna to wander the void, Girls let them come alive, more real and raw than ever.

Allison Williams shines in her own capsule episode, which sees Marnie run into her ex Charlie (Christopher Abbott). He’s beefed up and taken on a new masc persona, and over a dream of a night, he shows her a Manhattan that’s felt gone since the days of Moonstruck. Marnie throws on a glimmering red dress, and with it, the persona of the protagonist she never got to be, conning a rich man into believing she’s a call girl: “My name is Megita. Megita Perez.” Of course, the fantasy is ripped away by dawn the next morning, but it’s enough to open Marnie’s eyes forever. Clear-eyed, barefoot, and sober, she walks home to Chinatown and reclaims her life. Of course, Marnie, and the show, would fall back into old habits, but for this one moment, a character who had flailed for years suddenly found clarity.

There are no weak links in Season 5, but when it comes to seminal New York TV, nothing can top the setting of “Hello Kitty,” a profoundly misguided immersive theater production about the 1964 murder of Kitty Genovese. It’s not easy to write unintentionally bad theater, but Dunham and co. put the awkward shuffle to great use as a chaotic mise en scène for its self-involved characters: Hannah, Desi, and Marnie don’t seem to be aware that there’s a show going on around them. Of course, it’s on the balconies of this diorama set that Hannah catches Adam and Jessa making eyes at each other, and realizes what’s going on, as Brenda Lee wails to “Someday You’ll Want Me to Want You.” Kirke and Driver formed the show’s most powerful union, crackling with a Shiva-Shakti level of explosive chemistry. In “Hello Kitty,” it became clear that they were a perfect match, and that Hannah, like any of us, would be rendered a mere mortal in their presence.

The final season takes its cast on divergent paths, some into foreign territory. But for its first episode back, Girls delivers its characters at their purest: Ray and Shoshanna read the Times Metro section over gluten-free avocado toast (“The American middle class is dying. Thanks for the tip, Paul Krugman.”); Adam and Jessa share yogurt, naked, laughing all the way; and Marnie blows her life up for any shred of male attention. Hannah, meanwhile, experiences alien sensations of peace and freedom as she encounters a hot jock surfing teacher in Montauk (Riz Ahmed, a perfect stoner babe), returning her to the questions of Season 2’s “One Man’s Trash”: Why be miserable for the sake of individuality? Why not be happy? Girls would eventually end on a note of ambivalence, but “All I Ever Wanted” argues for its characters to enjoy life, and one another.