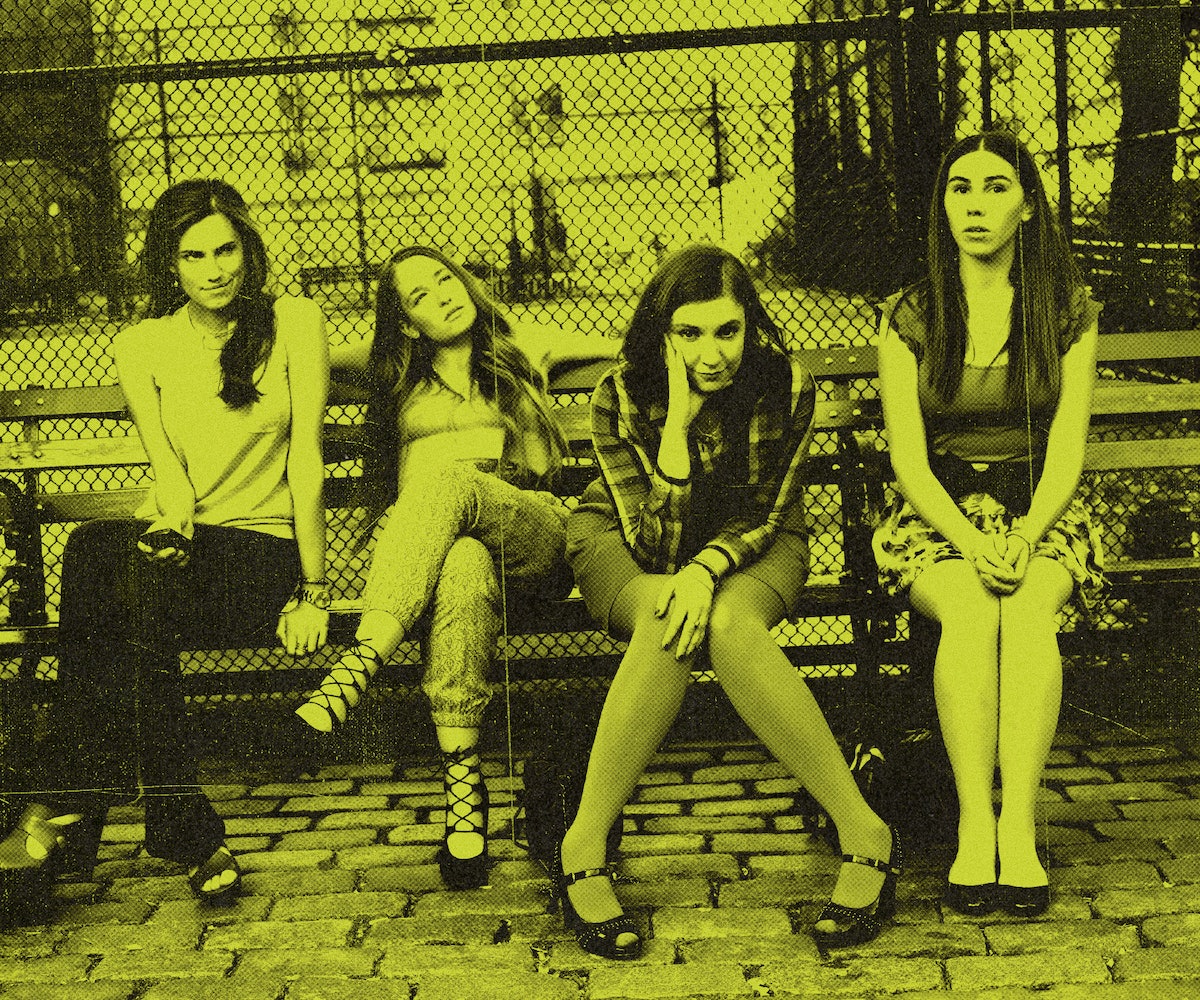 The first season of Girls was filmed in a bubble in 2011, with a no-name cast at the direction of a largely-unknown indie darling. It’s likely that Lena Dunham, along with co-creators Jenni Konner and Judd Apatow, intended to make a hang-out show, following a wayward, millennial milieu. But upon its premiere, on April 15, 2012, Girls catalyzed the discourse of a new decade.

In that first season, Dunham’s Hannah Horvath flirts with chaos — baring her tits for selfies and sexually harassing her boss — but she’s more of a lost soul than a firebrand. And yet, in every generation there is a chosen one: First Carrie Bradshaw on Sex and the City; then Nancy Botwin on Weeds; and this time, after a decade of dead feminism, Hannah had been called. Nancy had set fire to George Bush’s stucco suburbia. Now, it was Hannah’s turn to raze New York.

“Do you like the poster?” Shoshanna (Zosia Mamet) asks in the pilot, pointing to a poster for the Sex and the City movie. Of course, the rabid materialism that made the first movie a hit, in 2008’s pre-crash halcyon period, would sink the sequel in 2010. This story picks up in the ruins, two years later. Perhaps there was no grand romance left to be had with this city, after Guiliani and Occupy Wall Street. Shoshanna starts the series as the effigy for indulged J.A.P.s everywhere, the types who now have dominion over the East and West Villages, and take their finance boyfriends to Smorgasburg on Sundays. The girls of Girls were part of an unwitting new gentry, driven to the city to fulfill a snowglobe fantasy, only to arrive in the land that time forgot. And so Hannah, Shoshanna, Marnie (Alison Williams), and Jessa (Jemima Kirke) double down on their dreams, no matter the cost, in price or to their sanity.

Of course, no one involved involved in the making of that first season could have foreseen the Twitter barrage to come, a second coming of Twitter terrorism unseen since the days of Lost. Suddenly, everyone had Something To Say about Dunham’s upbringing, and those of the other lead actors, as if they were the first people of means to make it in Hollywood. The words “privilege” and “problematic” emerged overnight, and Dunham, cast as the Iphigenia of the art world elite, would be sacrificed in fire.

The second season marked the end of innocence, as Dunham would have to familiarize herself with making a show within a radioactive discourse. This was no longer a small indie experiment. At the dawn of the Twitter scourge, Girls experienced the then-rare and now-ubiquitous phenomenon of being commented on by people who didn’t watch the show. And so, the characters became actively confrontational. Hannah, once a lost post-grad with a thorny death drive, morphed into a feminist agent of chaos on par with the Joker. She no longer teased oblivion, but courted it. Girls’ second season aired concurrently with another mesmerizing new hybrid: Mike White and Laura Dern’s Enlightened. Hannah and Dern’s Amy, the two Cassandras, warned us to no avail of a dark decade to come: invigorated attacks on women’s bodies, fascistic neoliberalism, and an arena where the personal must always be political, no matter how annoying.

Hannah limped so that Julie could run through The Worst Person in the World.

Girls would now take on its commentators directly: sometimes messily, as with the wasted Donald Glover experiment in Season 2; and then brilliantly, as when Dunham made the Iowa Writers Workshop into a Twitter theater. The episodes had titles like “Triggering” and “Female Author.” At Marnie’s wedding, she asks her makeup stylist for a vibe of “Ralph Lauren meets Joni Mitchell,” with a “nod to my cultural heritage, which is white Christian woman.” At some point, if you weren’t in on the joke, you were the joke.

If you missed the barbed-wire critical discourse, mazel tov: you were in for a largely joyous, ever-surprising viewing experience. Though Dunham came up among the mumblecore milieu, her writing and directing was too self-aware, too mean, and too musical to fall into the shaky-cam funeral marches of the Duplass brothers. The episodes had to be entertaining to keep people watching through the noise. Hannah’s mom gets blasted on weed gummies. Natasha Lyonne can’t pronounce “incorrigible.” Rita Wilson skats! The show was beautiful to look at, held to the rigor of its Sunday night cohort: Mad Men, Game of Thrones, and Enlightened. In “Leave Me Alone,” Hannah lay awake at night, seething with resentment, naked beneath the weight of a sleeping Adam. She looks like a nude by Lebasque. In Season 5, the spectacle of Tokyo glimmers, crackles, and ultimately overwhelms Shoshanna. Gazing longingly at Adam from a balcony in “Hello Kitty,” Jessa surpasses any Juliet who has ever preceded her.

As Hannah had carried the torch for foremothers like Clarissa Darling, Felicity Porter, Betty Suarez, and Georgia Nicolson, so she would pass it on, parting the sea for the f*cked-up heroines of Orange is the New Black, Broad City, Jessica Jones, GLOW, Fleabag, Pen15, I May Destroy You, and, certainly, Insecure, HBO’s direct and necessary answer to Girls’ overwhelming whiteness. Hannah limped so that Julie could run through The Worst Person in the World.

Girls’ final season ended on a note of bitterness. A pregnant Hannah leaves the city with not much to show for her misadventures. The best plots of the previous seasons — Adam and Jessa’s crackling courtship, Ray’s foray into Brooklyn politics — faded away inexplicably, while side acts like Elijah (Andrew Rannells) and Desi (Ebon Moss-Bachrach) took on unnecessary prominence. The ending felt like a middle finger from a creator exhausted by controversies and apologies. But maybe Girls was revealing yet another ugly truth, one which many artists would face as they fled the city during the pandemic, broke and unfulfilled. Maybe the gentrifiers of Girls, pilloried for five years for their destructive self-indulgence, shouldn’t be entitled to a happy ending. In revealing that dreams don’t always come true, that the city can crush you, that friendships change and bend and fade, Girls stayed true to the bitter end.

Ten years since the first episode, the ragnarok is ready to begin again. New York, after a pandemic, riots, and Che Diaz, needs a new protagonist — and a new villain. Every streaming service offers a flawed woman in its algorithm, but if they’re anything like the leads of Shrill or Life & Beth, they lack the guts to really piss anyone off. While Hannah does shots in Valhalla with Nancy Botwin and Edwina Monsoon, someone’s going to have to take off her top and catch fire. It’s time for a new generation of girls to rise, and f*ck up the frictionless propriety of the decade. Here’s hoping they raise hell.