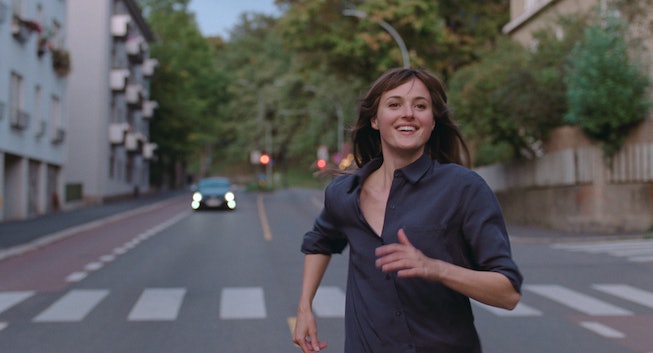 Renate Reinsve was touched by a bit of movie magic. The morning after she had decided to quit acting for good, she got a call from director Joachim Trier. Not only had he written a new film about an aimless and indecisive twenty-something woman searching for meaning and love in Oslo, he wrote the role specifically for her.

Reinsve, who had become friendly with Trier since working with the director a decade before in his film Oslo, August 31st (she famously had one line: "Let's do to the party!"), jumped at the opportunity. The film became The Worst Person in the World, the buzzy, heartfelt Norwegian rom-com that spun Reinsve from an almost former actor to the Best Actress winner at the 2021 Cannes Film Festival. At a pivotal moment in the film, Reinsve's Julie runs through summertime Oslo while everyone else remains frozen, like bugs suspended in amber. It's a surreal, giddy moment for both Julie and the viewer; and for Reinsve, I imagine, the surreality of her journey has only just begun.

The Worst Person in the World is now playing in theaters. Ahead, Reinsve chats with NYLON about embodying Julie, surrendering to the chaos of love, and more.

Not only is this your breakout role, but Joachim wrote this role with you in mind. That must have been super surreal. Can you just tell me a little bit about that?

I had this big decision. I was laying in bed and I decided to quit acting just because I felt it was so frustrating never to get to do what I really wanted. And then the next day, Joachim called me for this role. And I think life has been pretty surreal from that moment. I prepared for the role, we shot the film and then we waited until it premiered and when things started to happen. People started talking about it until it exploded at the Cannes Film Festival.

And you won Best Actress.

I still can't believe it. It's been really amazing.

What was your first impression of Julie when you read the script?

I knew that Joachim wrote it for me, but he didn't present me with a script then. I said yes because I admire him so much and I love all his work. And I had this one line in Oslo, August 31st, his film 10 years ago, so I knew what it would be like to be on his set. I was really nervous. Four months later, I read the script and I think I cried three times before page seven because she was such a badass. And the first scene in the script was when she snuck into the wedding. She gets sad and she thinks it's so uncomfortable being in that emotion, so she sneaks into a wedding and flirts with this guy and kind of f*cks up her own life.

I thought this was so interesting and so badass to just sneak into a wedding. But she's really trying to find her course and really struggling, really confused, and really vulnerable as well. I just really like the combination and the complexity of all the dynamics with her. You go everywhere with her. She goes deep into existential questions, but she's so fun and playful, too. It's a really big range. I was really scared of not getting that complexity in my acting. So I worked, I think, for a year, because the shooting was delayed two times. I just read the script every day and really prepared very hard.

Speaking of preparation, I read that you were inspired by Timothée Chalamet's performance in Call Me By Your Name. What was it about his performance that struck you and how did you try to incorporate it into Julie?

It's good to look somewhere for inspiration. I wanted someone who in their character went really far in the levity, but also really far into the existential depth of pain and sorrow, too. Elio is was my spirit animal for Julie. To make it light or to make it go really deep. But I have also had a lot of inspiration in my life from Isabelle Huppert and Charlotte Gainsbourg. I love the way they go into pain and loss and sorrow. They just go so far into that. But I also saw a lot of Kristen Wiig and I love her, she's a genius, and Will Ferrell. I have surrounded myself with both my whole life. I love the deep tragic stuff and I love the levity.

Julie has a hard time shaking her bond with Aksel. She leaves him but then at the end, they’re drawn back together. What's it about their bond that makes it so hard for her to let him go?

It is really a perfect relationship because they laugh so much together and they have really great conversations. He really sees her. But I think the thing that makes her want to leave is that in the start it was kind of romantic that he saw her, but also kind of defined her, and she needed that because she couldn't find her own identity. But then the paradox of that is that she has to leave because she doesn't want to be defined anymore. Her development is also to detach from finding her identity through something exterior. She has to break up with him because he also is so in control and he feels like he's the strongest one in the relationship because he can put everything into words and he can analyze everything.

It’s like their breakup fight, when she calls him out for thinking he’s smarter because he’s so quick to analyze everything.

Exactly. And that's just something I really fought for with Julie, that should be a strong place to be vulnerable and not know what to do or where to stand. And to try to start from there, I think it is a strong place to be because if you don't get there or dare to be there, then you can't figure out who you are or what you should do and what actually makes you happy.

You've mentioned how you and Joachim see each other around Oslo a lot and you guys have the same questions about love and existence. What are these questions that you guys share in common? Do you believe in love?

It's like the question of what is love and why do we fall in love with the wrong person? And we both have seen — have you heard of Alain de Botton? He’s a British philosopher who has this big talk about how you will actually fall in love with the one person because what triggers you to love someone is also what you have experienced, the pain you've experienced in your life until that point. So it's just like, what is the dynamic between something that does and doesn't work? Can you find someone that fits you or do you have to adapt to someone else to be happy?

Those are big questions and you can't know until you try to live it out. I know that I've ended up in really wrong relationships because I have been confused in what I liked about that person and what I felt painful about that person. And the classical thing of chasing someone and getting so much confirmation when they see you, but then it's so much pain when you keep on chasing and chasing and chasing. You think it's love, or I thought that was love. And then learning through what’s not love. You have to find it somewhere else, but I haven't honestly figured out what love is yet.

It's annoying how you have to fall in love and get your heart broken multiple times in order to figure out what love actually means to you and what relationship works for you.

Yeah, and also how to figure out where to take choices from. It's just really complicated because you can't know the consequence of your choice until you've lived it out either. You have this image of yourself and the way you should live your life, your hopes and dreams for yourself. And they will probably never come true. Something else always happens. So it's chaos, and you have to surrender to the chaos.

I have to ask you this because it’s my favorite Norwegian media, but have you watched Skam?

Yeah, of course. I actually saw the U.S. version, too. Our film is called The Worst Person in the World and Skam means “shame.” So those are the themes we surround ourselves with.