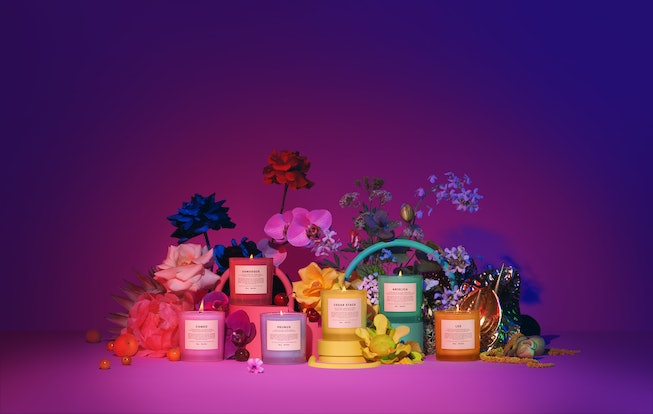 The creators behind your favorite Kacey Musgraves-approved candle are celebrating Pride in the most colorful way imaginable. Boy Smells, the creators of seriously chic candles, teamed up with some of the most notable voices in the LGBTQ+ community for its first Pride campaign. Along with a celebrity-driven campaign aimed at illuminating inclusivity this Pride, the brand released a colorful array of specially designed candles.

Launched on June 10 and continuing through the week of July 11, Boy Smells has given the keys to Its social media platform over to different voices from the LGBTQ+ community. Beginning with R&B artist, Rileyy Lanez, Boy Smells invited drag superstar Naomi Smalls, actor & singer Alex Newell, dancer Harper Watters, musical artist VINCINT, and fashion icon Richie Shazam in partnership with The Trevor Project to host a weekly color-themed takeover. Each ambassador is tasked with leading meaningful conversations through social posts, blogs, digital community events, and more.

Boy Smells was co-founded in 2016 by real life partners Matthew Herman and David Kien. This release, along with the brand's past releases, have been centered on bringing about a revolution to the gender binary, and the partners have sought to use their platform to illuminate inclusivity and spread light, knowing the immense power brands have in today’s society — and how they can mobilize communities and amplify voices for a greater good. Since its inception, Boys Smell has sought to create candles with scents that "embrace masculine and feminine simultaneously in a simple and straightforward way that aren't overtly targeted to a specific gender," according to its website.

In keeping with the month's focus on Pride, Boy Smells unveiled special colored edition of previously released scents, including a green Anjelica candle, a purple Prunus candle, and a soft yellow Cedar Stack candle. Each color is representative of a shade from the Pride flag, and throughout the months of June and July, 15 percent of any purchase from the Pride collection will be donated to The Trevor Project, the world's largest suicide prevention and crisis intervention organization for lesbian, gay, bisexual, transgender, queer and questioning (LGBTQ+) young people.

Speaking with NYLON, Herman explained the brand's intentions with the campaign and candles. "Our goal is to celebrate the diversity of the queer community and #illuminateinclusivity. The scents created for this collection are complex, layered, and optimistic, embracing traditionally masculine and feminine notes and mixing them together, to create unique identities. These scents encourage everyone to explore and express their full spectrum self through. We call this a genderful movement, where all gender expressions are celebrated both internally and in the world around us," Herman said.

Herman told NYLON that the campaign was created with a 100 percent queer network of luminaries, art directors, photographers, and marketers, and each role was part of a much larger initiative. "In a homogenous market where most scented products are marketed as either male, female or thirdly as genderless, we are hoping to disarm the binary and celebrate gender expression in all it's glorious forms, preferring the term 'genderful' as a post-binary mark of inclusion," he shared. "We think these full-spectrum scents allow the customer to activate their power from wherever they find it, and hope this is something that comes across not only in our products, but also in this powerful digital campaign."