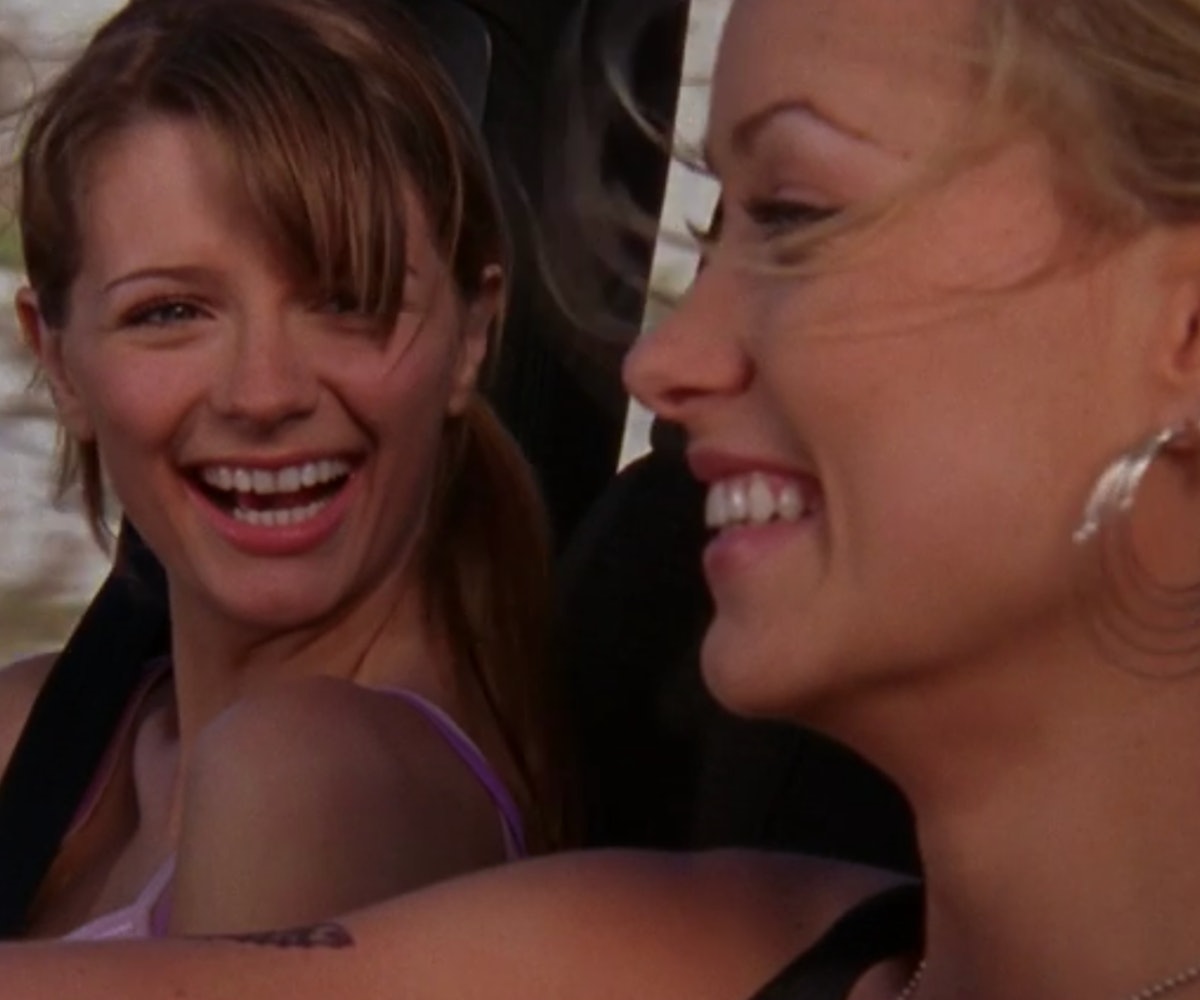 Marissa Cooper can’t catch a break. As the doomed teenage socialite of The O.C., she dates an emotionally unavailable 16-year-old with major trust and jealousy issues, is sexually assaulted, abandoned by her crook father, has Julie Cooper as a mom, and shoots someone in the most dramatic scene in TV history (“mmm whatcha say”) and eventually...well, we all know how her story ends.

But for a brief, four-episode arc, Marissa is happy. And much to the chagrin of a conservative mid-2000s Bush-era United States, it’s when she’s dating Alex Kelly, the bleach-blonde, tramp-stamp tatted manager of The Bait Shop, played by Olivia Wilde.

I don’t need to tell you that growing up in the aughts, we didn’t have a lot of representations of bisexual women. On Friends, Ross can’t talk about his ex-wife Carol without saying the word “lesbian.” The L Word premiered in 2004, a year before the Marissa-Alex relationship, but was largely inaccessible to anyone without a Showtime subscription. Now, we have the reigning representation of the sad, hot-but-she-doesn’t-realize, bisexual girl archetype, an archetype that didn’t start with Fleabag, Phoebe Bridgers, and Sally Rooney protagonists, but with Marissa Cooper. (Okay, it actually probably started with Emily Dickinson, but she wasn’t on primetime television.)

In the mid-aughts, media’s biggest representation of bisexual women was Lindsay Lohan, who was publicly shamed for gallivanting with then-girlfriend Samantha Ronson. In her book Girls Can Kiss Now, writer Jill Gutowitz talks about how Lohan’s bisexuality in this era was seen as an extension of her mental health: She wasn’t dating a woman because she was bisexual, we were implicitly told, but as a symptom of her mental illness.

“Speaking to this era of the 2000s that we pass over a lot, I feel like the narrative for queer women was that was we were just starting to have barely some representation,” Gutowitz told me in March. “For someone like Lindsay Lohan who was visibly queer and dating a woman in the tabloids, Marissa Cooper, Katy Perry’s “I Kissed A Girl,” all of it had this narrative that it was under the guise of doing something wild and crazy, like ‘f*ck you, mom.’

When I thought about the Alex-Marissa relationship on The O.C., I remembered it as the same, with flashes of Julie Cooper saying “Marissa is out of control,” even though I think we can all agree that hooking up with Olivia Wilde is, in fact, the most sane thing someone can do. When I rewatched the episodes, I saw many scenes I expected: Seth and Ryan sexualizing the relationship; “Keep doing what you’re doing,” Seth tells them when he visits Alex’s apartment to find Marissa with bedhead wearing a silk bathrobe. Kirsten and Julie brush it off as “a phase,” and Julie says she, too, “experimented” in her “wilder days.”

But I also saw a more assertive, realized Marissa than I remembered, and certainly more assertive and realized than she was in Season 1, brooding at the bottom of her driveway. Marissa is riding shot-gun in Alex’s Jeep listening to Rilo Kiley’s “Portions for Foxes” (gay!) and never looks happier. She’s head-bobbing with abandon to The Black Keys in her room, hanging out with Alex’s cool queer friends, making out on the beach, figuring out how to do laundry, and learning about herself. It’s a far cry from her drinking Long Island iced teas and throwing pool furniture into the deep end while screaming.

Alex is the only person Marissa dates that doesn’t relegate her to the role of a babysitter. Marissa constantly finds herself in traditional, hetero caretaking roles, whether it’s with helping Ryan adjust to Newport life, helping rich kid loner Oliver after his breakup with his fake girlfriend, or helping Trey when he gets out of prison. But she didn’t have to take care of Alex, who expanded Marissa’s world in all the ways that Ryan did, except that she was fiercely capable.

Of course, it doesn’t work out. Their relationship is ill-fated: Marissa moves into Alex’s apartment, but still spends her time organizing pep rallies rather than getting, I don’t know, a job to help pay rent. Julie Cooper shows up at Alex’s door and reminds her that Marissa has only been in love once, “and he looked a whole lot different in a wifebeater.”

But it also couldn’t work out. Josh Schwartz, The O.C.’s creator, was under major demands from the network to keep the relationship sexless and short.

Schwartz told journalist Bill Simmons over email that “the network was very nervous,” about Marissa and Alex’s relationship. “It was an extremely conservative time in our country (thank Janet Jackson for that) and everyone was freaking out. We had a whole episode where every kiss between them was cut out, just so I could get one kiss in the ‘Rainy Day Women’ episode. I was literally on the phone with Broadcast, Standards and Practices bartering for kisses,” he said. “It was a battle, and The Powers That Be are part of a big corporation, and were going in front of Congress at the time (every network was) — so I understand. They are all good people who were under a lot of pressure. But they wanted that story wrapped up as fast as humanly possible and Alex moving on out of the OC.”

Ever an ally, Schwartz continued, “But if you want Alex back, America — you're going to have to VOTE BUSH OUT OF OFFICE.”

So it was homophobia, not a long withstanding crush on Ryan Atwood, that killed Marissa’s one chance at joy. And not to queer fanfic the rest of Marissa’s life, but there’s another world where she and Alex could have spent their years booking indie rock shows and pouring vodka sodas for Newport’s underage at The Bait Shop for years to come. And in that alternative ending, I think she would have been happy.

NEXT UP
Life
The First Squid Game Season 2 Trailer Is Here
Life
Michelle Yeoh To Lead The Brothers Sun, Netflix’s Gangster Drama Series
Life
Watch Dakota Johnson Frolic In 1800s England In Persuasion Trailer
Entertainment
Shea Couleé Hints At Exciting Things to Come In the Second Half of ‘All Stars 7’