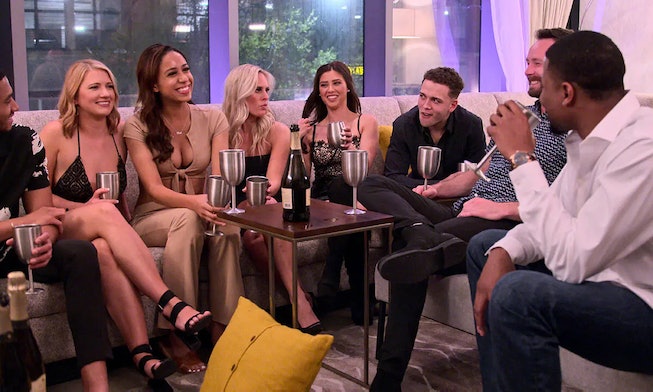 Netflix’s latest contribution to the canon, The Ultimatum: Marry or Move On, which is currently the platform’s second most-watched show in the world, is a little bit of both. It features six long-term couples where one member has issued an ultimatum to the other: By the end of the show, they will get engaged or break up. The couples then break up, all meet each other and then, as newly-single people, have the option to choose each other’s partners to live with in a “pretend marriage” for three weeks. Surely the best way to tell if you’re ready to legally share all your assets.

It’s worth mentioning that nearly all of the couples are under 30 years old and all of them have been dating for fewer than three years, which is reason enough not to get married. But the real proof that nobody on the show should get married is because they’re desperate enough to get married that they would issue an ultimatum, trust hosts Nick and Vanessa Lachey with their problems, and willingly date other people.

“Psychologists agree an ultimatum is not a good way to get somebody else to do what you want,” Nick Lachey tells the cast in the first episode. “But it is the best way to get you the answers you need on a timetable you can live with,” which is the equivalent of someone going to therapy just so they can advertise it on their Tinder profile.

Usually, the emotional manipulation techniques on reality TV shows are more subtle: Taking away phone access, planting rumors, depriving contestants of sleep, and encouraging binge drinking. But the manipulation techniques on The Ultimatum are hidden in plain sight: The very premise relies on jealousy and fear, which is aided by a society that values marriage so much, you get a tax break for it.

The effects of this all plays out very early on. In the third episode, the group is at a dinner where they announce who they’ve chosen to live with for the next three weeks. After Colby chooses Lauren, Lauren’s ex-boyfriend Nate, who gave her the ultimatum because he wants kids and she doesn’t, stands up and proposes to her. Never mind the fact that she still doesn’t want kids. (Colby, by the way, also wants kids, but hopes Lauren will change her mind. Good luck with that.) “I just hope they didn’t do it out of fear,” Vanessa says to Nick.

But that’s exactly why he did it. The reason why Nate is so keen on setting aside his own wants to propose to Lauren, or why many of the couples came on the show in the first place, despite what will undoubtedly one day be on their divorce papers as “irreconcilable differences,” is because of the sunken cost mentality.

When you’re 24, being with someone for two or three years seems like an eternity. I know this, because a sunken cost mentality also kept me from ending a long relationship when I should have. In the first episode, the contestants repeatedly say they want to get married because they’ve spent so many years together and they don’t want the time together to be wasted. But society sees marriage as the goal of a relationship, the contestants are willing to go so far to achieve it, even if it doesn’t make sense for them.

As Buzzfeed’s Shannon Keating puts it: “By glorifying marriage as the only truly worthwhile and meaningful relationship in someone’s romantic life, these sorts of reality dating shows convince their contestants to value the social signifiers of marriage — of being able to claim, as one of the guys on The Ultimatum puts it, that ‘this is my girl’ — to such an extent that they’ll do just about anything to put a ring on somebody, anybody’s finger.”

The very premise of the show also proves its contestants shouldn’t get married: All of them are horny and excited at the prospect of dating other people. (A normal impulse, by the way!) In interviews, they go back and forth between talking about wanting to “start a life,” but as soon as they’re given the chance to ditch their partners, nearly all of them say they’re excited and open to be dating other people. If one minute, you’re threatening to break up with your partner because they don’t want to get married and the next, you’re having fun flirting with some hot guy by a pool, that’s...something to pay attention to.

But the couples’ sudden interest in someone new also isn’t surprising. For some people, marriage is a goal to be checked off a list, and the act of marriage is more important than who it’s with. There's nothing wrong with that pragmatic view towards marriage; it’s just another way some of these couples are incompatible, and no desperate attempt to save a relationship for fear of having your time been wasted can fix that.

Ultimately, no show will make me think people in their early 20s who have been dating for a couple of years are ready to get married. But then again, you could only populate an earnest dating show with people in their 20s, who still believe that marriage means you’ll be together forever.