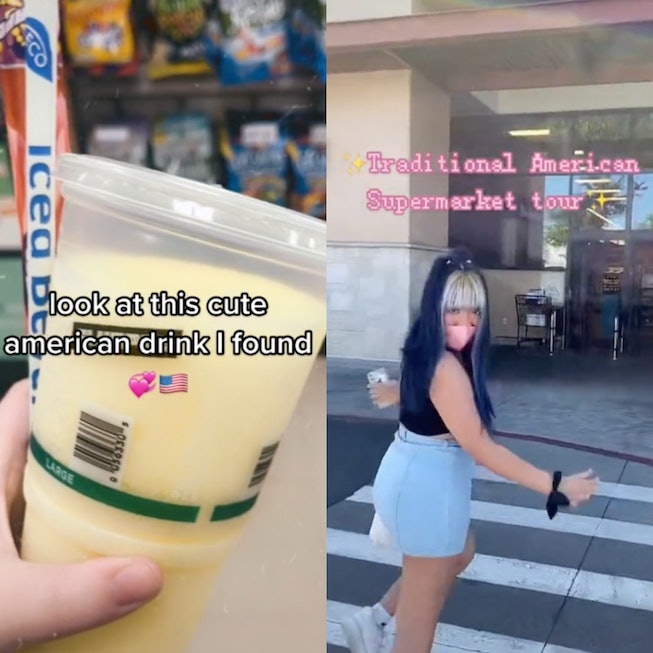 Videos with the hashtag #Americore, which has 30.5 million views, show quintessential American snacks and grocery stores positioned to look aesthetically pleasing, with a deranged music box background sound and cute emojis, similar to the way Japanese snacks like Pocky and Ramune are often put on display by white influencers for being “kawaii.”

One video begins with the text “let’s make an American snack,” and continues, “I love American culture and always loved how cute the snacks were,” as the creator, @xkyeii, pours some yellow Gatorade into a mason jar and places cookies from Walmart into glass Tupperware. “Please don’t hate me I’m not American but love American culture,” the video continues.

Another video from TikTok creator @loipfroit shows a tour of an American grocery store, where the user shows the Cheetos and Swiss Miss aisle and writes “this food is so exotic!” and points out “a real white person - so cute!”

“I find [Americancore] videos subversive and hilarious because white audiences never get that these videos couldn’t exist without the 'oh I went to my local Asian grocery today and was shocked at ____' videos,” culture critic Stitch told Vice. “They’re reacting to a very modern form of Orientalism and mocking it right in front of its salad, on the platform it was popularized on."

And of course, there’s a sinister subset of “Americore” called “Floridacore,” wherein the user finds this “super aesthetic Floridian grocery store” (a Publix, for the uninitiated) and buys coffee-flavored Coke and Cookies & Cream Poptarts, because, of course.

NEXT UP
Beauty
“Cold Girl” Beauty Is TikTok’s Most Baffling Winter Trend
Culture
10 Luxurious Gifts For Your Bougiest Friend
Culture
Simona Tabasco Is the Lifeblood of The White Lotus
Ask A Witch
Ask A Witch: How To Survive The Holidays With Hoodoo Magic