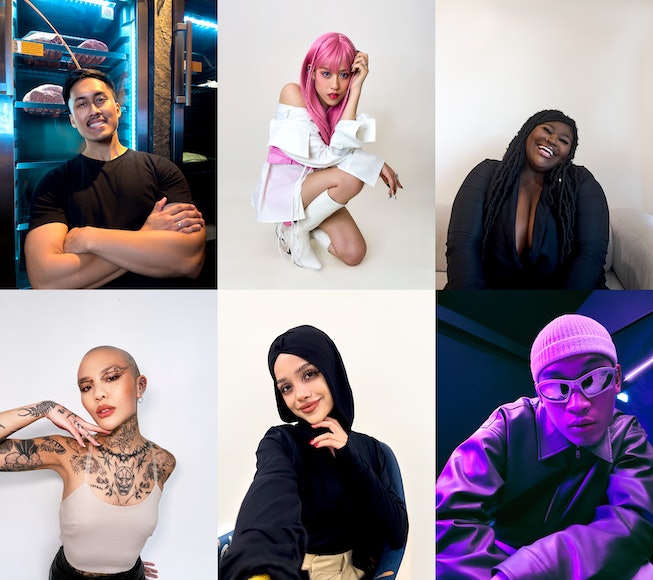 If there’s something you’re curious about in this world, rest assured that it’s on TikTok. There’s creators who boldly ask strangers questions on the street; aspiring chefs who show us how to make beef Wellington with Oscar-worth cinematography; artists who create logic-defying makeup; tireless home cleaners illuminating new ways to eviscerate sink grime. TikTok is nothing without the vast range of its creators.

TikTok’s annual Discover List is out this week, highlighting creators across five different categories: Icons, Innovators, Foodies, Changemakers, and Originators from across the globe — recognizing the hard work creators put into originating viral trends and lifting up their communities. The list is the perfect excuse to break up the monotony of your FYP, which for me is mostly Princess Polly reps and attachment style “experts.” Use the list to discover the vast expansiveness that is TikTok —because the algorithm is good, but the platform’s creators are better.

These creators educate their followers, advocate for change, and add some welcome and necessary heart to our FYPs. Here are the 10 creators TikTok is recognizing for being able to speak up and speak out.

Born in Arezzo and raised in Rome, Italy, Tasnim Ali answers questions about her culture and traditions while dispelling misconceptions about her religion.

Auri Katariina is a master cleaner who shares her cleaning secrets and cleans homes free of charge for people with mental health conditions or other circumstances that keep them from being able to keep their homes clean.

Actor Dylan Mulvaney went viral for her series "Days of Girlhood," a documentary about her transition journey, which has been viewed more than one billion times.

Hunter Prosper is an ICU nurse who creates TikToks telling the stories of strangers, including everyone from Uber drivers to people he meets in parks, on hikes, and on the street, asking them things like, “Who was your greatest love?”

Osito Lima is a Peruvian creator who focuses on philanthropy, whether it be helping people on the street or empowering people with motivational words.

Mamadou Ndiaye is an animal expert with a lifelong passion for zoology that he shares in quick-witted segments about absolutely bonkers animal facts. Meerkats are psychopaths? Who knew?!

Naomi Hearts is a trans, plus-size, Latina creator-turned-model, after becoming a 2022 TikTok Pride Trailblazer and booking a major modeling campaign.

Kairyn Potts is a Two Spirit, Nakota Sioux creator from Treaty Six Territory who posts about everything from fashion and beauty to life on the rez.

Ana Laura Pacheco is a chemical engineer who makes chemistry actually interesting through sharing her experiments with viewers.

These creators are turning food into art — designing masterpieces and putting a unique spin on a variety of cuisines to solicit maximum salivation during your scrolls.

Abir El Saghir is a self-taught chef and cinematographer extraordinaire, who creates cooking videos that are artful as they are delectable.

Cooking ASMR at its finest! Bayashi is a Japanese creator who makes delectable videos for 34 million followers all over the world.

Shereen, a professionally trained chef and creator, encourages viewers to cook from scratch with step-by-step processes and detailed visuals.

Australian TikToker Daen Kelly takes inspiration from her Spanish and Italian heritage — aka her recipes are heavy on the pasta, garlic, and olive oil. What more could you want?

Dimas is a meat enthusiast from Indonesia that is boldly and generously guiding his audience through the world of steaks.

Priya Sharma is a creator from Australia who is inspired by her Indian heritage, as well as "Dad's Special Spice Mix." What’s most impressive is that she does a lot of her cooking while living in a van.

Candice and Mari are sisters from Pittsburgh who sweetly cook dinner for each other, making everything from mouth-watering BBQ kabobs to hamburgers with rainbow-colored buns.

Patricio Carvalho is a Brazilian TikTok creator who has built a following for his delicious barbecue videos, which he records in the gorgeous forest he calls home.

Cooking never looked so good as on Samo Frais’s TikToks, which are gorgeous, cinematic videos of dishes like butter chicken and mac and cheese donuts.

Nigel Kabvina is a cook and mixologist in Manchester, England known for spearheading #BrunchTok and making dramatic, delicious dishes for his extremely lucky roommate.

These creators are TikTok’s biggest trendsetters — blazing the path for content creators both on and off the platform.

DeMarcus is an actor and comedian who blew up for his relatable comedy skits, giving him opportunities in fashion, acting, and writing for various TV shows.

Drew Afualo, also known as TikTok’s “Crusader of Women", is a rising star known for her authentic ways of empowering women and calling out misogyny.

Fabiola Baglieri is a creator in Italy known for her gorgeous makeup looks, but also for her the way she inspires everyone to be themselves.

Self-proclaimed "#1 Menace in the Nation,” Fannita Leggett is known for her candor and comedic responses to viral TikTok videos.

In what is truly wholesome content, Francis Bourgeois is TikTok’s best-known and most beloved trainspotter, sharing his truly uplifting journeys of spotting trains throughout the world.

Jimmy Jan is a 22-year-old creator who was in a skiing accident that left him paralyzed and in a wheelchair. Now, he documents his journey living with a disability, never ceasing to seek out new experiences.

Linh Barbie is a creator in Vietnam with over 18.6 million followers, known for her array of bubbly content that includes POVs, short films, comedy, dance covers, and more.

Nicholas Flannery is a British comedy creator who makes satirical TikTok videos about film tropes like the "Rich White Lady" or the "Wife That Dies At the Beginning of the Movie."

WonJeong makes fun and silly stitch videos about his daily life for his more than 49 million followers worldwide.

Cecilia Blomdahl moved to Svalbard, an island close to the North Pole, seven years ago, and fell in love with life there — building her TikTok around what life is really like in the arctic.

TikTok’s Innovators are pioneers in their fields — pushing boundaries and experimenting with new, trends in dance, comedy, makeup, art, and style.

Adrian Bliss is a creator from London best known for his comedy sketches on TikTok which explore everything from history to natural science to religion. Not only has he been profiled in CNN, The Guardian, and Vogue, but he’s worked with global names like Dungeons & Dragons and the BBC.

Caroline Klidonas is an actor and writer who creates parody videos based on popular TV and film tropes, including medical dramas, corporate romcoms, or Zodiac-inspired fantasy series.

Jarred Jermaine has 20 years of experience producing and engineering music, and has amassed a following on TikTok through educating people on sound and sampling.

Tra Dang is a creator who has been making content for over six years. She currently has over 19 million followers on TikTok, where she posts dancing and singing videos, as well as comedic sketches.

Vika Bren set a goal of creating 100 hand paintings composed of optical illusions on TikTok. She did so, and then much more, continuing to create wildly imaginative, logic-defying paintings for her followers.

Younes Zarou is a modern day magician, showcasing unbelievable stunts, colorful effects, and unique edits that leave you questioning how he does it all.

Zonosann is a visual artist who combines cinematography, animation, and storytelling to pull his viewers into a scintillating visual experience.

These creators have started viral dances, sounds, popularized aesthetics, and more — spearheading the content that is iconically #ForYou.

Jan Trejo is an AR designer who shares the many effects he creates, many of which spark trends on the platform — including effects like "Who'd You Rather? By Jan," all the TapTap series effects, which have shared by millions.

Aida is a dance creator based in Banda Aceh, Indonesia, who is known for creating viral choreography to the song "Darari" by TREASURE.

Ariana Taylor is a creator in New York City who has been a lifelong hip hop dancer and is responsible for creating several viral dance challenges.

Avemoves is a dancer who wears a signature mask that represents the ability to achieve anything, regardless of who you are or where you come from.

David Vu is a creator from Oslo, Norway who, together with his girlfriend Yasmin Hassan, shares joyful dances and fashion inspiration.

Amahree is a creator from Piedmont, South Carolina who has created countless trends and viral sounds since downloading TikTok in August 2019.

Mei Pang is a first-generation Malaysian-Canadian creator who has a notable collection of head-to-toe fully symmetrical tattoos, which, along with her content, has helped cement her spot as a trendsetter in the beauty industry.

Niana Guerrero is only 16, but has been making an impact worldwide through her incredible knack for dance, style, and humor.

When Poppy O’Toole lost her job, she started sharing her cooking talents on TikTok. Now, she’s launching her own recipe book, has a new role as a MasterChef judge, and was recognized as the "High Priestess of potatoes" by Nigella Lawson.

NEXT UP
Culture
Spotify Wrapped Is The Only Social Media That Doesn’t Lie
Culture
An Exhaustive Breakdown Of The Balenciaga Controversy
Culture
Allie Rowbottom’s Novel Aesthetica Isn’t About Instagram — It’s About Survival
Culture
In Cann’s Holiday Campaign, The Greatest Gift Is Being Chill