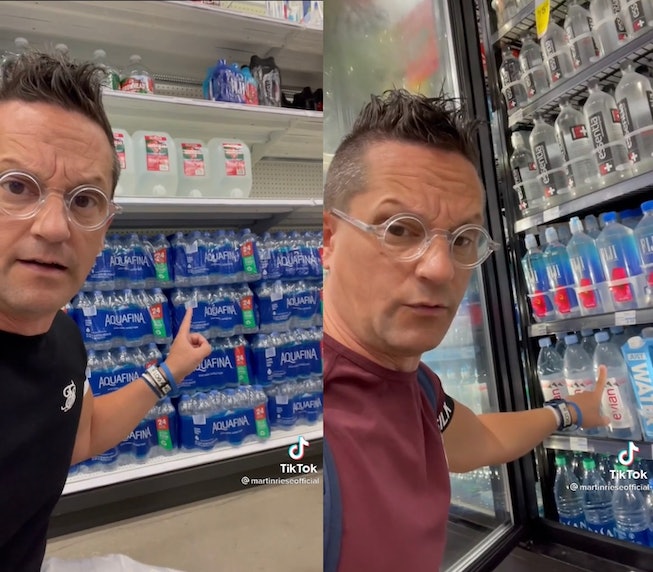 There was once a time that I considered toting a 1.5 liter Essentia bottle around town to be the ultimate, year-round accessory. The giant bottle’s simple design —clean letters, a small white cross that reads as vaguely medicinal — made me feel like my hydration journey was not only good for my health, but one also imbued with luxury. I’m no woman in STEM, so when a water bottle tells me it has electrolytes, I believe what I’m told and get to chugging. But that was the old me, the naive me, the person I was before I had my eyes opened by Martin Riese, TikTok’s premiere water sommelier.

Last week, my favorite girls group chat blew up when a friend dropped a TikTok from Riese with a succinct yet harrowing message: “Oh no, Essentia got the ax.” My Essentia? Hearing Riese call my chosen elixir “highly-processed tap water” felt like a stab to the heart, but I kept watching, eager to learn more. Turns out, I am even more susceptible to marketing than I previously realized. Riese went into the fine print of Essentia’s electrolyte claims, debunked the myth of alkaline water, and even explained why spring water brands can taste different every time. Whatever the bottled water version of ego dissolution is, I was experiencing it.

Riese’s TikTok page finds him visiting the water aisles at nationwide institutions like CVS, 7-Eleven, and Target and matter of factly breaking down the brands available. He reviews buzzy new brands, details what to know about water minerals, and rightfully drags Nestlé every chance he gets. Even after only a week of following Riese’s dispatches, my water knowledge has expanded tremendously. For example, do you know what TDS stands for? I do: Total dissolved solids, the inorganic salts and small amounts of organic matter present in solution in water. The more you know!

Crucially, Riese doesn’t pretend to be a medical professional or approach his practice with a woo-woo lens; he’s just a guy who loves water, standing in front of a TikTok audience, asking them to think about what they drink. What I appreciate most about Riese’s efforts is that he’s not schilling for any particular brand. He’s just as down for the pricier options, like Evian and Fiji water — my childhood visions of opulence! — as he is for more proletariat choices like Arrowhead water, the more affordable and go-to spring water of my southern California youth. Annoying scolds are always here to parrot how there’s no ethical consumption under capitalism, which, duh, but it also rocks to understand the nuances of water and to see through the pitfalls of appealing branding and marketing. Being smart and hydrated? I’d love to be involved.

NEXT UP
Beauty
Bella Hadid’s Clip-less Updo Is Going Viral On TikTok
Beauty
This Viral Black Honey Lipstick Dupe Is Only $5
Astrology
February 2023’s Full Snow Moon in Leo Embraces The Real You
Fashion
Jenna Ortega Is The Face Of Adidas’ Newest Line
Style + Culture, delivered straight to your inbox.