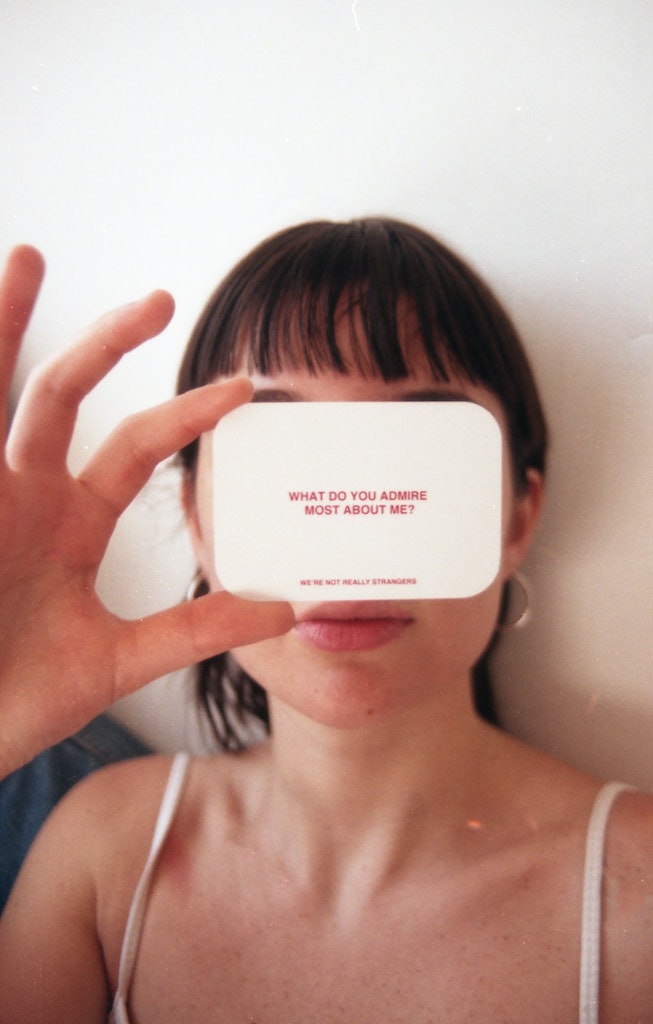 A billboard reminding you to forgive yourself, graffiti on a semi-truck breaking down attachment styles, an affirmation that your anxiety is lying to you on the hoodie of a pedestrian on a busy street. If you're on Instagram, there's a good chance you've seen these simple, photoshopped images from We’re Not Really Strangers on your feed, filled up with comments of more people willing to candidly dig deeper into their reactions to each post's message than you'd think for such a public, popular platform. Currently, 2.6 million people engage and follow with the public diary, but lucky for its most invested fans, We’re Not Really Strangers is now more than just an Instagram page.

Launched in 2016 by Koreen, a mononymous 25-year old former model-turned-photojournalist, We're Not Really Strangers has, in a few short years, grown more into something like a movement, advocating for all of the hard but worthwhile stuff — like vulnerability, empowering meaningful connections, and fostering strong relationships (with ourselves and others) — that has, over the years, branched out of the digital-only landscape to make the impact tangible for people all over the world.

In 2018, We're Not Really Strangers launched its first product, a card game designed to "deepen your existing relationships and create new ones," in real life. Designed to play with anywhere from two to eight players, the card game comes complete with 150 questions and wildcards, along with pencils and a WNRS notepad to keep things on track. The cards read prompts like, make an assumption of me or how are you really? With over 1,000 product reviews, comments from customers are mainly glistening. "It always gets folks thinking and it always leaves all of us feeling incredibly thankful for one another," shared one reviewer. Today, the card game has various extension packs, from relationships and honest dating, to even a collaborative pack with Jada and Willow Smith's Red Table Talk.

Most recently, the brand launched its Self Reflection Kit in the fall of 2020, designed to work on the relationship you have with yourself. Differing from the card game, the kit includes a cool, reflective material covered notebook, a pen, and 52 cards and wildcards that act as prompts for working through whatever it might be that you need to. (See: What is one truth I've recently come to terms with? Write it out.)

"It's as simple as asking yourself the right question, but you have to answer honestly, which is the not so simple part," Koreen says. "It's really about giving yourself the time to get to know yourself on a deeper level."

When it comes to the actual content, be it online or in the products, Koreen and her small team in Los Angeles are the brains behind all of the gut-wrenching quotes and thought-provoking questions, pulling from their own experiences and lessons learned.

"It's been a very internal process and very personal, like based on if a friend was venting to me, I'll turn that into a question," says Koreen. "Or if I'm struggling with something, I turn that into a question. I say my questions are very autobiographical. They kind of tell you what a person is going through, through the questions they're asking. You know? So when I had my first heartbreak, I was asking [questions about] getting over your first love and so on. The questions people are genuinely curious about typically have something to do with what they're going through."

During a year when human connection, and the extreme lack thereof, is constantly top of mind, We're Not Really Strangers has found itself and its products all the more useful in 2020. The brand has seen significant growth this year, but Koreen isn't sure how much of that is because of quarantine versus all of the time and work and energy she and her team have put towards growing We're Not Really Strangers into what it's become today. "I'm sure it's a mixture of both," she says. "I think with quarantine, a lot of what we're doing just took on a new context. We have to connect, emotionally and even physically apart. And how do you do that? How do you keep up your relationship?

"That's why I think the self-reflection time is so important because if we're being honest, it's really hard to keep up new relationships right now. This to me, is like, building a relationship with yourself season. That is the person you can see every day safely. So how do you make that time work for you? I think it's important just to use it, build your relationship with yourself up and get to know yourself better, so that when we do go back into the world, we're hopefully a little bit better versions of ourselves."

You can shop WNRS card game, self-reflection kit, and more at werenotreallystrangers.com.

NEXT UP
Culture
On The List (With Melissa Rich): How To Throw The Ultimate Apartment Party
Astrology
February 2023’s Full Snow Moon in Leo Embraces The Real You
Fashion
Jenna Ortega Is The Face Of Adidas’ Newest Line
Culture
Marie Faustin Loves To Waste Men’s Time
Style + Culture, delivered straight to your inbox.