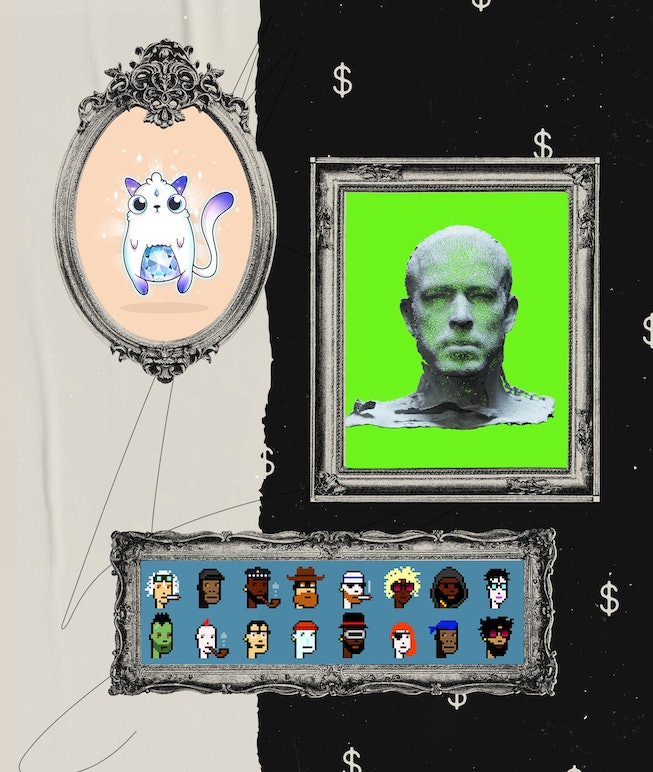 “Holy f*ck,” tweeted the digital artist Beeple on March 11 when his The First 5000 Days NFT, in the form of a JPEG, sold at auction for a staggering $69.3 million, making him one of the most valuable living artists. Two weeks earlier, when Grimes released 10 pieces of NFT artwork through the online marketplace Nifty Gateway, the pieces — titled WarNymph Collection Vol 1 By Grimes x Mac — sold out in less than 20 minutes and made $5.8 million (a percentage of which was to be donated to the NGO Carbon180). A day before, RTFKT Studios, creators of digital collectibles, released a drop of virtual sneakers in collaboration with Fewocious, which made $3.1 million in five minutes. Kings of Leon just became the first band to release their latest album as an NFT, and Twitter CEO Jack Dorsey recently put the platform’s first-ever tweet up for auction, also as an NFT. Even Anna Sorokin (aka Anna Delvey), the fake heiress recently released from prison, says she’s working on an NFT project. If you joined Clubhouse, you may have noticed that the conversations have shifted from sustainability and bad dates to NFT creation, with such discussion subjects as “Why do my NFTs suck?”

“The NFT space booming has been a complete shock to me,” says Jordan Castro, lead developer at CryptoKitties, which in part is how, why, and where this all began. NFTs, a buzzy new term, which, despite how it might seem, has been in operation for more than the past month, stands for non-fungible tokens, a new crypto craze transforming the way we consume, collect, own, and create.

Think of it like a Picasso painting: The original Girl Before a Mirror would be the NFT — it’s unique, the first of its kind, the genesis piece, non-fungible or not interchangeable. Sure, you can make copies of the original as prints and sell them in IKEA, for example, but they are not the original and don’t have the same value — much in the same way that a cubic zirconia is not a real diamond. An NFT is the digital version of this. It proves provenance and, because it’s collectible through scarcity, has value.

“The intention behind CryptoKitties was to get people to feel the value of blockchain without having to explain it to them,” explains Castro of the cute Neopets-like feline critters, which were launched in November 2017 by Dapper Labs, which delivers blockchain-based experiences and games. This one is centered on breeding and collecting cats, each of which is one-of-a-kind, owned only by you, and unable to be replicated or destroyed. With their bulging eyes and kooky personalities, they’re super cute, perfectly weird, and remind me of a PC game called Catz that I had as a kid (because I wasn’t allowed a real cat… sad face emoji).

It was also around this time that Larva Labs’ creative technologists John Watkinson and Matt Hall conceived CryptoPunks, which launched five months earlier in June 2017. “We were thinking about digital collectibles and video games like Fortnite where people really value the clothing they wear,” says Watkinson. “We were thinking: Is there more? A pure collectible thing that could be made, and how would that work? How we don’t really feel like you own it in those games, but what about in a more just pure collectible digital art environment — how do you really feel that ownership? Blockchain and crypto seemed like a really interesting take.”

It was an experiment in digital ownership: 10,000 punks, which harked back to the pixel-based art they were fans of, were created, released free of charge, and instantly claimed. “The crypto community sort of got it and thought it was fun or cool,” says Watkinson. Over the next two years, interest crept up (accelerated in part by the pandemic and our attention turning to all things digital). And, in February, a single buyer splurged $1 million in ethereum (ETH) — one of the most popular currencies used to make purchases on the blockchain — on CryptoPunk collectibles, 34 in total.

The blockchain is an open ledger — a database shared across a network of computers that records transactions. So: “You can claim that work,” says Watkinson, which, in an age of streaming and sharing (and sharing), becomes important. And makes provenance, especially on behalf of the creator, verifiable.

Mac Boucher, who created WarNymph with his sister Grimes, says an NFT is “an endorsement of an economy where an artist has long-lasting equity in their work.” He explains: “We believe the size of this drop grabbed the attention of a lot of newcomers to a conversation that has been going on for some time about the future of a decentralized web and ownership of authorship.”

It’s what Jamie Burke, an early investor in Bitcoin and Ether and founder and CEO of Outlier Ventures, an accelerator dedicated to blockchain, describes as a system based on user-centricity as opposed to being reliant on big corporations like Amazon, Google, or Facebook. “In the way that Bitcoin gave the internet native internet money for the first time,” NFTs, he says, are a form of social currency and represent being a part of that community and having status within it.

NFTs, therefore, can be likened to band merch, sticker books of the 21st century, Pokémon cards, or even a virtual Kinder Surprise toy. This nostalgia combines with Boucher describes as “an expansion of financial markets or asset classes, [as] Gen Z and millennials have been increasingly priced out of traditional markets.”

There’s also the behemoth NBA Top Shot (more than $200 million in sales), which captures highlights from games and sells them as NFT memories and moments. Singer Shawn Mendes has recently released digital wearables via Genies on the NFT marketplace OpenSea, including his guitar, necklace, and vest. And not to be left behind, renowned auction house Christie’s hosted the aforementioned Beeple sale, which marked a significant turning point. Plus, just recently, Sotheby’s announced its upcoming first foray into NFT, in collaboration with digital artist Pak.

“With the Beeple drop, we realized this market was really gaining momentum,” says Boucher, for whom the long-term investment of NFTs is something called the metaverse: “the ability to be interoperable between virtual platforms,” he says. Yes, there’s the collecting and fandom element of NFTs, and, yes, the authorship transparency, too; but there is also a question of joining virtual worlds, or even the real world with the virtual world, which might sound mind-boggling. But then two years ago, so was the idea of buying skins in video games or virtual garments online. But we can, and people do.

“There are billions of dollars’ worth of digital skins, basically digital goods, trapped in gaming platforms at the moment,” says Burke. “People have invested huge amounts of time and money, and they’re not transferable. They can’t do anything with it. Wouldn’t it be great if people could sell these digital goods? A whole generation, whose primary wealth is currently, if you’re 16 to 25, probably digital — it’s probably trapped in a gaming platform.” Which, in some ways, he views as a form of financial exclusion. His prediction, though, is: “I can tell you this will happen this year, somebody will get a mortgage for a house with an NFT as collateral.”

“I can tell you this will happen this year, somebody will get a mortgage for a house with an NFT as collateral.”

Benoit Pagotto, co-founder of RTFKT Studios (and that $3.1-million-in-five-minutes fame), agrees: “Because it’s the birth of a new kind of system.” He says the studio has always operated as though it’s 2030 — as a medium, NFTs will be everywhere, from concert tickets to buying land, which you can already do on platforms like Decentraland. Gen Zers are early adopters, having grown up with Minecraft and being used to buying and selling skins. “For most of them, actually, their virtual possessions are way more valuable than the physical ones,” he says. For that reason, he’s not particularly bothered about trying to convince those that don’t get it yet. And while many might just look at the dollar signs buzzing around (I refer you back to the opening paragraph), it’s authenticity, he says, that counts in this community-driven arena. (Though, like with most niche communities, there are murmurings of big brands wanting to get in on the action, too.)

“There’s always been recognition and respect for the craft and for the art, but it’s always been for the fact we do it for the love of it,” says the digital artist Chad Knight, who has been creating digital work for the past six years or so and who is known for his sweeping landscapes or, as he describes them, “mind’s eye” visuals. “It’s like you close your eyes and that’s kind of what you see.” Infinite. At first, galleries were skeptical about the value in his work, which regularly sells well, but now the mood has changed. NFTs have legitimized that and provide no end of potential creativity for him. “You’re kind of the magician,” he says, and notes his works with a humanistic angle have resonated the most with his audience. A compelling story, just like with physical art, is what captures attention. The only difference is that Knight’s pieces hang on a virtual wall, which, thanks to NFTs, essentially now do “exist.”

Amid all the hype and sudden movement in this area, though, Burke is keen to flag the quote by Canadian communication theorist Marshall McLuhan: “The medium is the message.” It’s a new form of media.

One that, really, is only limited by the code that is created for it. “Why are we limited to our physical bodies when there are no boundaries to what we could be in the virtual space?” says Boucher.

“There’s going to be a lot of virtual worlds being sold as NFTs where you can welcome people to your own universe, you can have a virtual sculpture garden,” predicts Knight. “Humans have a problem with being like, ‘Oh that will never happen.’ ... Like the smartphone. No one ever saw that coming.”