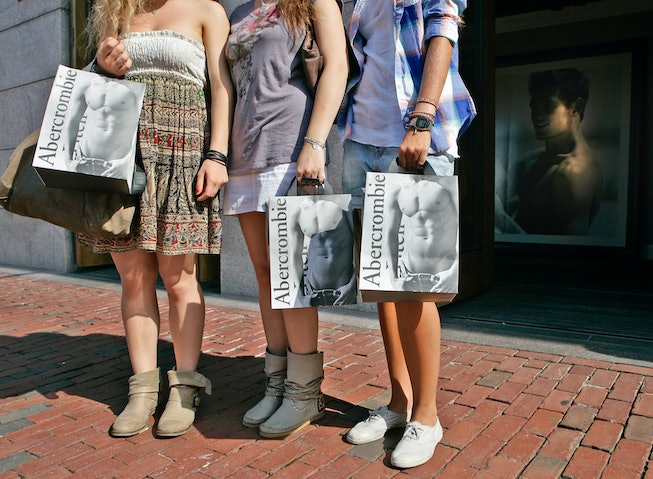 Below, watch an exclusive clip from Netflix’s White Hot, the streaming platform’s upcoming documentary about Abercrombie & Fitch. In it, former employees of the store discuss the chain’s signature scent, Fierce For Men, and offer a glimpse into what it was like working there.

If only I could tell sixth-grade me who only wore Abercrombie I could find at thrift stores that in 20-some years, a documentary would be made untangling the threads of this company that made people growing up in the 1990s and 2000s feel equally powerful as it did bad about themselves.

The documentary joins other brave works untangling the major cultural moments of the 2000s, including a Hulu docuseries on the cult fave mid-aughts brand Von Dutch. Though not about fashion, the New York Times Britney Spears documentary also falls into this same category of films, where we unpack aughts phenomenons we so readily accepted, like paparazzi and media’s treatment of struggling stars or, in the case of Abercrombie, a brand built on discriminatory practices.

White Hot: The Rise & Fall of Abercrombie & Fitch will follow the brand through the peak of its popularity and its downfall. Netflix summarizes: “Abercrombie & Fitch conquered malls in the late ‘90s and early ‘00s with gorgeous models, pulsing dance beats, and a fierce scent. But while the brand was running white-hot, its popular ‘all-American’ image began burning out as controversy came to light surrounding its exclusionary marketing and discriminatory hiring.”

I remember having a vague sense of this happening publicly in the 2000s, but it was an open secret that only hot people — particularly hot, white people — were hired to fold lace tank tops at a store that somehow managed to feel exclusive even thought it was located inside of a mall.

Come the early 2000s, the company faced a class-action suit for alleged discrimination against applicants of color. Abercrombie managers were apparently ordered to deny applicate that “didn’t fit a certain look.” The company also faced backlash for at least one offensive product line.

We don’t know what else we can expect from the doc, but we do know it was directed by Alison Klayman, whose works indicate a strong grasp of the mid-aughts, including a documentary about the artist Ai Weiwei, Take Your Pills, about the age of Adderall; and Jagged, about the life of Alanis Morissette.

The documentary premieres April 19 on Netflix. In the meantime, prepare yourself to once again face the provocative photoshoots that haunted your youth, the logo tees that entire cliques were organized around and, of course, prepare to be reminded of the cologne. We can’t forget the whiff of sweet wealth and misplaced confidence that greeted you every time you walked past a shirtless man to walk into a store.

The trailer for the documentary was released on March 31 on Netflix’s Twitter account, with the caption that takes a line from one of the film’s interviewees: “They didn’t invent evil. They didn’t invest class. They just packed it.”

The trailer includes interviews with former Abercrombie employees and managers and gets to the heart of the doc, which is about the company’s exclusionary policies, including how managers were told to recruit “good-looking people,” with the company stipulating what “good-looking’ means. “Exclusion was the root of their success,” one interviewee says.

We’re excited than ever now for the release of the film, which premieres on Netflix on April 19. In the meantime, you can watch the trailer, below.

This article was originally published on March 24, 2022