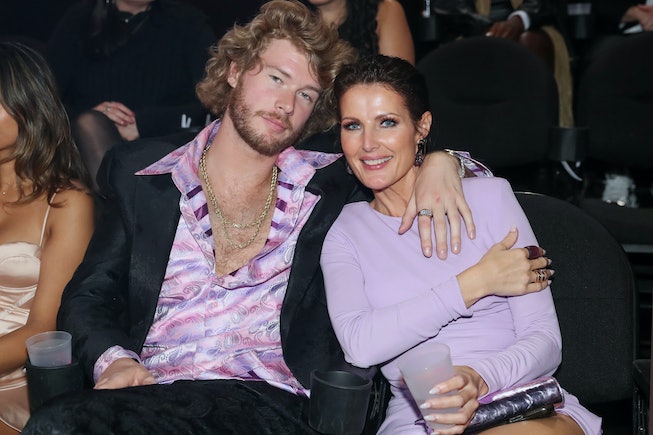 What is it about the VMAs and famous lip locks? Michael Jackson and Lisa Marie Presley in 1984, Madonna and Britney in 2003, and Addison Rae’s mom Sheri Easterling and rapper Yung Gravy in 2022. The latest lip lock has become the internet fixation du jour for its backstory, one that is both salacious and ultimately inconsequential. Who are these people and why does anyone care? All will be revealed, below.

Who is Yung Gravy?

Yung Gravy is a 26-year-old Soundcloud rapper, but his main claim to fame is the viral success of his song “Betty (Get Money)” on TikTok. The track samples Rick Astley’s 1987 hit “Never Gonna Give You Up” and has achieved complete ubiquity across the app’s For You Page.

Who is Sheri Easterling?

Celebrity moms usually sit back and make sure their daughters are drinking enough water, but sometimes, they can leverage the fame of their kids to embark on a celebrity that is entirely their own. Being in a race with your mom over TikTok followers would be utterly mortifying, but hey, moms deserve brand partnerships and fragrance companies, too! Just ask Tish Cyrus. Easterling has built a TikTok audience of her own off the success of her daughter, and she now hovers at more than 14 million followers. Her bio? “Single mom.”

Her family joined her in Addison Rae Goes Home, a 10-episode, Snapchat-produced reality series. While Rae’s star rose on TikTok and she expanded into music, movies, and modeling, the rest of her family grew their profiles, too. Rae’s mother has a Spotify-produced podcast with her daughter, and both parents were signed to WME’s digital talent agency alongside Rae in 2020.

How is Addison Rae’s mom involved with Yung Gravy?

After it was revealed that Rae’s father cheated on her mother, Yung Gravy spoke to the BFF’s Podcast about Easterling, mentioning that he had occasionally messaged her after she made a TikTok lightly implying she was crushing on him.

The rapper has gone on the record claiming that Easterling is very much his type, which happens to be MILFs. “She’s like a Southern belle, and I’m a Northern boy, so it felt really cute and wholesome,” Yung Gravy told Page Six. “[I’m] into MILFs, and she’s kinda the queen of MILFs.”

He also told YouTuber Jeff Wittek that he was planning on going on a date with Sheri in an episode of Wittek's podcast.

Are they dating now?

It’s unclear. They did smooch on the VMA red carpet and while sitting behind Nicki Minaj as she accepted an award, but they didn’t confirm their relationship status. Yung Gravy did, however, offer more details of his affections for her.

“I hit on her first. I knew of her, and I thought she was fine,” Yung Gravy told Page Six. He said they met on “the internet” and “FaceTimed” a couple of times before meeting in person. Sounds like love in the digital age!

Is it a PR relationship?

Nothing is sure in this world: A source told Page Six that they believe the romance is nothing more than “viral bait.”

Is Addison’s dad involved in the drama?

Yes. Monty Lopez, who has 5.3 million TikTok followers of his own, allegedly had a five-month affair with a 25-year-old woman named Renée Ash, as reported by Page Six in July, after months of rumors that Lopez was cheating on his wife.

“Unfortunately, he misled me … he lied to me,” Ash told Page Six, claiming Lopez had told her that his marriage to Easterling had ended when that was not true. “He told me that we were going to be together and have babies together. He told me a story of his marriage that convinced me that they were apart and in the process of getting a divorce.”

He and Easterling have since split, given her TikTok bio, and her VMA PDA sessions with Yung Gravy. She also addressed the situation in a July 2022 Instagram story: “Personal matters being brought public are always challenging and overwhelming for anyone involved.I will be okay. My biggest concern is — and always will be — my children and their fragile hearts and minds. I will always do my best to protect them.”

Did Lopez respond to Yung Gravy and Sheri’s romance?

He sure did. On August 8, Lopez reshared the clip of Yung Gravy on Wittek’s podcast on TikTok, challenging him to a boxing match. Yung Gravy responded in his own TikTok video, saying, "I'm a grown man. I'm not going to fight you over TikTok drama." No, but he’ll certainly engage in it!

How does Addison feel about all this?

"Addison is embarrassed by her parents at this point and trying to keep her distance from them,” a source tells ET. “She's trying to stay grounded and focused on the projects she's working on. She doesn't want them to impact her future." The TikTok star also unfollowed both her mother and father on social media, which after knowing all the details, could not be more understandable.

NEXT UP
Beauty
Bella Hadid’s Clip-less Updo Is Going Viral On TikTok
Beauty
This Viral Black Honey Lipstick Dupe Is Only $5
Culture
Who Won At The 2023 Grammys
Culture
The Cutest Couples At The 2023 Grammys
Style + Culture, delivered straight to your inbox.