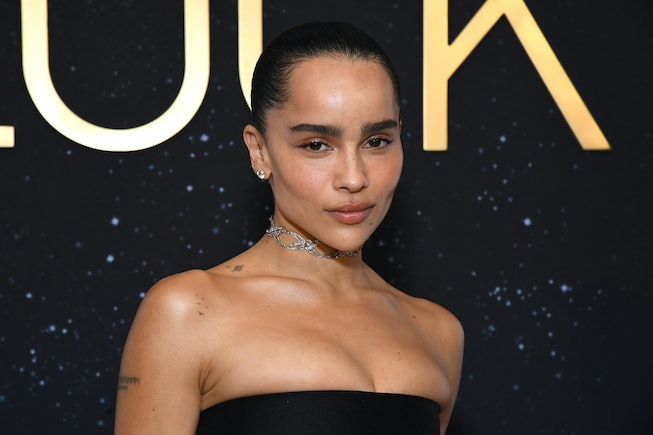 In August 2021, the Internet was graced with photos of Channing Tatum riding a tiny BMX bike through the East Village with Zoë Kravtiz perched on his back. It was a moment where we felt grateful for paparazzi, and a moment that left us with more questions than answers. Was the famous beefcake dating the world’s coolest girl? Is it a tiny bike or is he really that large? Where does one get a BMX bike in New York City?

Now, Kravitz is opening up about her relationship with Tatum, the star of her upcoming directorial debut, Pussy Island. The film, which is set to be released next year, follows a cocktail waitress (Naomi Ackie) who gets invited to a hedonistic private island by a tech billionaire (Channing Tatum). The two met after she cast him in the role, and Kravitz says they naturally hit it off. Two hot people hitting it off? Unsurprising! And since the infamous pap photo, rumors about their relationship have been swirling.

“He’s just a wonderful human,” she told GQ. “He makes me laugh and we both really love art and talking about art and the exploration of why we do what we do. We love to watch a film and break it down and talk about it and challenge each other.” Fingers crossed the film is Dear John.

She continued sharing what she likes about Tatum, whom she calls “Chan,” who was a source of support for her on set, a time when she says she “was just a crazy person.”

“Whether it was making me tea or pouring me a drink or going to whip someone into shape or whatever — he really was my protector and it was really wonderful and sweet,” she says. “I think if you can do something like that together, it’s a good test. And we came out even stronger.”

I have no doubt Tatum is a protective force, but the real reveal in Kravitz’ interview was spilling the details of the famed paparazzi photo that quickly became one of the biggest memes of the year. It was the first time they were outside together and they had decided to walk to Kravtiz’ writing partner’s house a few blocks away. She was wearing jeans on a balmy day, so he offered her a ride.

“I was sweating and he was like, ‘Get on the bike, I’ll ride you over and you can relax,’ ” she told GQ, noting that, as she did so, she immediately spottted a paparazzi out of the corner of her eye. “You want to keep it sacred and private as long as you can. So that you don’t have to even think about what the world thinks about it.”