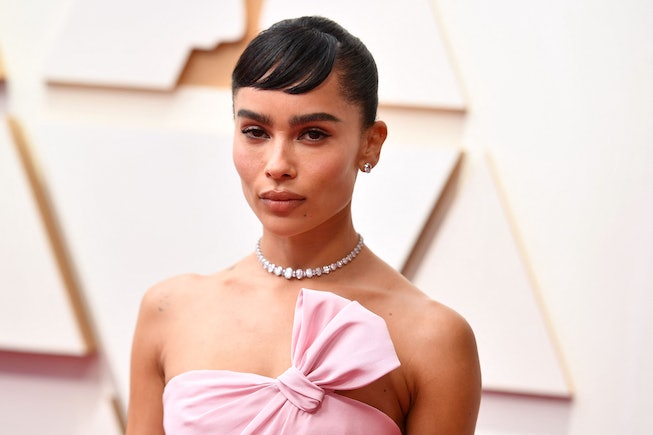 Zoë Kravitz, the actor, model, singer and queen of effortless cool, is directing a film called Pussy Island. Her first full-length feature, she describes the upcoming project as a “genre thriller” and has said it’s loosely about her experiences with gender. Here’s everything we know about the highly-anticipated film so far.

Pussy Island starts filming next year, but it’s been in the works since 2017

Kravitz told Deadline she’s been working on the film since 2017. We don’t know yet when Pussy Island will be released, but according to Deadline the film begins production in early 2022 on an undisclosed tropical island. Maybe they’ll rub elbows with The White Lotus season 2 cast?

In an interview with AnOther Magazine, Kravitz explained how she began writing Pussy Island while shooting Fantastic Beasts in London. “I had a decent amount of time off during that film, and I was feeling a lot of frustration and anger towards men, specifically in my industry, and I felt like this wasn’t a conversation that was happening at the time,” she said. “Then my imagination ran away with me and I started writing a story around those feelings. Then Harvey Weinstein happened and the world changed. This story has evolved with the world evolving, which has been interesting and which is part of the reason it took so long. This conversation is happening in real time.”

Pussy Island is a thriller

Per Deadline, the film is about a young waitress who sets her eyes on a handsome tech mogul, played by Channing Tatum. She eventually gets sucked into his world and is invited to an intimate gathering on a private island where she gets the sense that something isn’t right. Cue The Twilight Zone music. “There’s absolutely a thriller element to the film, but it has comedy, drama and real heart. At heart through, it’s a genre thriller,” Kravitz told Deadline.

Speaking with AnOther Magazine, Kravitz said that she had originally written Pussy Island’s lead character for herself and assumed she would star in it, but scrapped the plan. “Maybe a year in, I had decided that I wanted to direct it and that I didn’t want to do both,” she explained. “It was actually really fun, creating this character and taking her away from me and making her something that is not a version of me. Writing something for a woman that she can sink her teeth into, as I’m constantly reading one-dimensional, boring roles.”

Naomi Ackie is now on board

The British actress will star alongside Channing Tatum, and has previously had roles on Doctor Who, The End of the F**king World, Star Wars: The Rise of Skywalker, and Master of None. Ackie’s star is very much on the rise. In 2020, she walked away with a BAFTA award for Best Supporting Actress for her work in The End of the F**king World, and she’s set to play the legendary Whitney Houston in the upcoming biopic I Wanna Dance With Somebody.

The cast just keeps getting more A-list alt for Kravitz’ debut. Alongside Channing Tatum and Naomi Ackie, Christian Slater, Alia Shawkat, Kyle MacLachlan, Haley Joel Osment, and Geena Davis have joined the cast, alongside Liz Caribel Sierra, Levon Hawke, Trew Mullen, Saul Williams, and newcomer Cris Costa. How many characters does this film have? It’s unclear who anyone at this time is playing, but we can’t wait to see this smattering of icons share the screen.

We do know who Rex is playing

In less than a year, Rex went from former MTV VJ in obscurity to Serious Actor for his role in the excellent A24 film Red Rocket. In Pussy Island, Rex will play Cody, the longtime friend of Slater King, Tatum’s character, and personal chef/trainer...talk about two professions with a boatload of high-energy machismo, which Rex excels at.

The title has multiple meanings

Kravitz spoke with Deadline about the multiple meanings of the title, which feels very tongue-in-cheek and self-aware of the kind of 2016 Hillary Clinton feminism many women readily adopted at the time.

“I started writing this story in 2017, As a woman in general, and a woman in this industry, I’ve experienced some pretty wild behavior from the opposite sex. The title was kind of a joke at first, this place where people would go, bring women, party and hang out. The story evolved into something else, but the title wound up having multiple meanings. And it alludes to this time and place we claim to not be in anymore, in terms of sexual politics. People are evolving and changing but there is still a bad taste in a lot of people’s mouths from past behavior. It’s a nod to that, but it’s also playful, and a really playful film in a lot of ways. I like that the title leads with that and has some heavy meaning beneath it.”

In the Deadline interview, Kravitz said she specifically picked Tatum for the role of the tech mogul. Tatum said he was shocked to receive the offer, but that the role felt “scary and liberating,” and they developed the script together. “Chan was my first choice, the one I thought of when I wrote this character,” Kravitz said in the interview. “I just knew from Magic Mike and his live shows, I got the sense he’s a true feminist and I wanted to collaborate with someone who was clearly interested in exploring this subject matter.” What can we say: we love a hyper-masculine man diving into gender politics!

Rumors began circulating in January that the pair were dating days after Kravitz filed for divorce from her husband, actor Karl Glusman. Over the summer, Kravitz was spotted in the East Village riding on the pegs of Tatum’s BMX bike — a very 2000s power couple move — fueling rumors that the two may, in fact, be dating. Nothing is confirmed, but whatever’s going on, we’re happy these two beautiful people found each other!