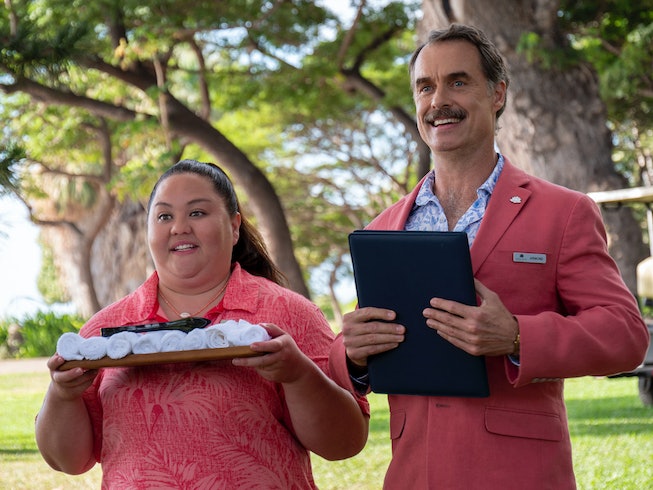 For the past five weeks, the world has been enraptured by the happenings of HBO’s The White Lotus. Created, written, and directed entirely by Mike White, the miniseries follows the wealthy and self-involved visitors at the titular resort and explores the contentious relationship they share with the resort’s put-upon employees. Though the series is technically a murder mystery, the death at the show’s center largely takes a backseat to White’s careful study of class, privilege, entitlement, and the lasting negative impacts of imperialism and overtourism.

This Sunday, August 16th, HBO will air the finale for the show’s inaugural season, where viewers will finally learn who died and how they did. But luckily, we don’t have to mourn the end of this perfect summer mystery, since, earlier this week, HBO announced that White’s breakout series will return for a second installment. According to a press release, season two will “leave Hawaii behind and follow a different group of vacationers as they jet to another White Lotus property and settle in temporarily amongst its inhabitants” — aka The White Lotus is officially an anthology series.

Given that a large part of the first season’s success is owed to its incredible cast — which, amongst others, includes Jennifer Coolidge, Connie Britton, Murray Bartlett, Jake Lacy, Natasha Rothwell, Sydney Sweeney, and Brittany O’Grady — it was only right that NYLON come up with our own dream cast to ensure that this next installment of Mike White’s latest hit lives up to its predecessor:

A decade ago, HBO premiered a little gem called Enlightened. Created by Mike White with an assist from its star, Oscar winner Laura Dern, the show lasted for two seasons before being unjustly canceled right before what White has claimed would have been its final season. Following Amy Jellicoe (Dern) as a 40-year-old woman who, after a spiritual awakening at a Hawaiian rehabilitation retreat, dedicates herself to dismantling the soul-sucking corporation she was once a high-powered executive for, Enlightened is still one of HBO’s finest programs. A large part of that is owed to Dern’s Golden Globe-winning performance, which would have been nothing without White’s incisive writing and direction. All this to say: the pair are a match made in heaven.

Their reunion has been a long time coming — and what better way to finally make it happen than in the second installment of The White Lotus? With her unstoppable will and stern determination, Dern’s Amy Jellicoe was a far cry from Jennifer Coolidge’s Tanya McQuoid, but I can easily see Dern settling into a similar role given both characters' steadfast belief in the power of meditative-like practices. (We can talk about White’s obsession with Hawaii at a later time.) Let Dern tap into some of that same wealthy entitlement she so perfectly embodied through Big Little Lies’ Renata Klein, but give her character a manageable Xanax addiction so she’s a bit more flighty and slightly less high-strung. Let’s get this queen another Emmy!

Murray Bartlett’s Armond was a delightful mix of contradictions: an understandably indignant manager at a resort full of myopic plutocrats who also mistreats his own subordinates, a recovering addict who doesn’t hesitate to steal a resort guest’s bag of illicit substances, and a so-called respectable man who makes no qualms about coercing an impressionable employee into on-the-clock anilingus. As the man responsible for ensuring that every White Lotus guest has all of their needs promptly met, Armond was ostensibly the show’s protagonist. A new season would need a similar character, but to keep audiences interested, they would need to be embattled with a whole new set of problems that don’t involve addiction and untempered libido.

Enter Patti Harrison, who, as a young millennial, could easily play a manager who herself is stressed out after recently being promoted to become the youngest manager in the resort’s history. Pressured with the need to prove that age does not inherently dictate ability, Harrison’s character would spend the season trying to make sure everything runs smoothly — especially as she faces increased scrutiny from the White Lotus higher-ups following the events that happened underneath Armond — while also facing more age-appropriate issues in her personal life. In Together Together, Harrison proved that her dramatic chops are just as good as her comedic ones, so I have no doubt that the rising star could expertly handle White’s scathing satire.

Part of the appeal — no matter how nauseating — of Shane Patton’s character in the first season of The White Lotus is watching Jake Lacy play totally against type. Forever known as one of Hollywood’s perennial “nice guys” (Girls, Obvious Child, the gone-too-soon High Fidelity, just to name a few iconically good roles), Lacy’s heel-turn to an obnoxious, spoiled, entitled filthy rich mama’s boy in White’s miniseries was refreshingly unexpected. To capture that goodwill in the series’ second outing, I implore White to do a similar casting — but this time with a different Hollywood Nice Guy: Paul Rudd.

One of very few straight white men in Hollywood who not a soul can say anything negative about, Rudd is the perfect candidate for this slot. Widely known for playing a struggling-yet-determined loving father in Marvel’s Ant-Man franchise, no one would expect Rudd to portray a ruthless antagonist, making it all the more exciting to imagine him as an unforgivable villain, willing to treat service workers like servants as he demands to be waited on hand and foot. Paul Rudd has done so much for us and he deserves a solid good-boy-gone-bad moment to call his own — I mean: Hey, look at us! Who would’ve thought? Not me!

Season two of The White Lotus won't be the same as season one, so in my dream fantasy, Rudd’s character is not a needy newlywed, but a serial bachelor who unexpectedly finds himself falling for another resident at the resort — one played by (hopeful) future Emmy winner Michaela Coel. The polar opposite of Alexandra Daddario’s Rachel Patton, I imagine Coel playing a sly and confident visitor, who, unlike her fellow guests, didn't pay for her stay but, rather, won it in a raffle organized by the private elementary school where she teaches in New York to help pay for the Masters degree she’s trying to obtain in Sociology.

Though Coel’s character would entertain the advances of Rudd’s wealthy bachelor, we would slowly learn that she has always been one step ahead. As a self-described activist studying the intersections between race, class, and gender, she would never deign herself to actually date someone as selfishly clueless as Rudd’s character. Instead, she’d be using her time with him as research, slowly studying everything about him as she puts together a proposal for an upcoming thesis about the ways rich white men are able to put themselves and their perspectives at the center of everything, even when encroaching on other, less fortunate people’s land.

Connie Britton played the white feminist power businesswoman so well, but in the end, there's only so much White can say about “white people problems.” Making this character someone of color — who has to battle prejudices on the lines of gender and race — would give the showrunner so much more to work with. And who better to play a powerful woman of color than Kerry Washington, whose seven-season run on Scandal is largely considered an exemplar of the trope?

As a single mother taking a rare week off to spend some time with the son she thinks is “drifting” farther and father from her, Washington would have plenty to work with as she struggles to unplug from her all-encompassing work responsibilities to fulfill her promise to her son that she is finally going to give him her undivided attention. But as she spends more time with him, she’ll also start to realize that certain aspects of who he’s become make her slightly uncomfortable — even if she also knows that admitting so goes against her tenets as a “progressive” CEO.

In HBO’s Genera+ion, Smith plays an unapologetically flamboyant gay boy going through romantic foibles. For much of this season of The White Lotus, people suspected that Quinn might have been quietly dealing with matters of his own possible homosexuality. (Does he really want to help those hot shirtless canoeists or does he, you know, want to help them?) So why not play into that dynamic even more explicitly in the next season, with Smith battling his mom over aspects of his sexuality and gender presentation? In fact, as an only child, Smith could embody elements of all the Mossbacher children — simply trying to mind his business a lá Quinn while also pointing out the hypocrisies in his mother’s faux appeals to “tolerance” and “acceptance” a lá Olivia. Can't you just imagine Justice Smith taunting his mom about her discomfort with him wearing a Patrick Church Speedo on the beach?

As evidenced by Brittany O’Grady’s Paula and Kekoa Kekumano’s Kai, every story about wealthy people being forced to confront their privilege needs a young adult romance that seems doomed from the start at its center. Enter Broadway’s West Side Story star Isaac Cole Powell, who would be the perfect love interest for Justice Smith. A low-ranking employee at the resort, Powell, with his impossible-to-ignore good looks and effortless charm, would immediately grab Smith's attention while refilling the fruit tray at one of the resort’s signature breakfast buffets. The pair would then quickly find themselves embarking on a whirlwind, eye-opening romance where Powell helps Smith see just how privileged his life has been — even as he’s still been forced to feel like an outsider due to his sexuality — while Smith helps Powell find the confidence he needs to finally stand up to the boss that is too mired in her own stressful duties to take the necessary time to acknowledge her subordinate’s clear potential.