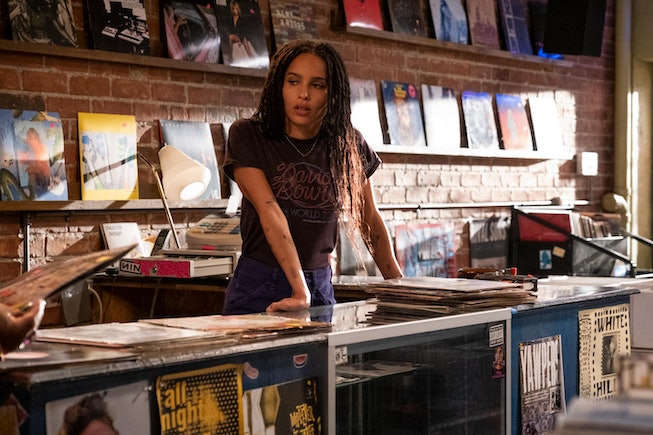 If you were to ask me about my top ten television episodes of the year, I'd immediately regale you with a story about the initial shock I had while watching the eighth episode of Hulu's High Fidelity, when I first saw secondary character Simon break the fourth wall by narrating directly into the camera. For the seven episodes prior to this, such duties had been relegated to Rob, the ostensible protagonist of the show, who had spent the previous 3.5 hours recounting her most memorable heartbreaks. But for the next half-hour, it was Simon who would recount his own most memorable heartbreaks. (The twist, it turns out, was that all these heartbreaks were by the same person.)

"Ballad of the Lonesome Loser," as it is titled, was a particularly effective one-off episode, one that successfully diverted focus from the show's main arc without sticking out like it didn't belong. Simon, after all, had been a huge part of the central narrative — as Rob's best friend, star employee, and one of her heartbreaks (he turned out to be gay). As soon as the episode was over, I couldn't wait to restart it from the beginning. And after watching it a second (and maybe third) time, I couldn't wait to see a similar thing done for some of the show's other secondary characters. Unfortunately, my dreams for that have now been crushed, since Hulu cancelled the critically-acclaimed dramedy almost six months after its premiere.

For those who don't know, Hulu's High Fidelity is the third of its kind. First, there was Nick Hornby's 1995 book, which followed a music-obsessed record store owner named Rob who obsessively counted down his five most memorable heartbreaks as if he were meticulously curating a playlist for his high school crush. Several years later, in 2000, there was the movie, which was written by its star John Cusack and kept much of the novel's details the same. Now, two decades later, Hulu introduced a new generation to this beloved story while switching a few key things to make the story resonate more for a 2020 audience. Most obviously was the gender-switch of Rob. No longer was he a borderline misogynist know-it-all — in many ways, the physical embodiment of entitled toxic masculinity. Instead, Rob was now a bisexual woman, played by the inimitable Zoë Kravitz — who, it must be said, has always been an incredible actress, but hadn't really been given a juicy enough role to shine in until now.

Which is why Hulu's High Fidelity worked so well. Switching locales from London (or Chicago) to Brooklyn, New York, this latest update to Hornby's story felt remarkably current, blending its central tale of the aftermath of heartbreak with one that also addressed modern issues, like gentrification. While other Brooklyn shows like Girls were content to depict the heavily-populated New York borough as lily-white oases for privileged 20-somethings, High Fidelity felt real, peppering its rendering of a modern-day Crown Heights with people of all shapes and colors. In addition to Kravitz's bisexual protagonist, there was her gay best friend, the aforementioned Simon (David H. Holmes); her plus-sized Black friend Cherise, an aspiring musician brought to life by Dolemite Is My Name's Da'Vine Joy Randolph in a scene-stealing performance; and her "biggest heartbreak," Russell (The OA's Kingsley Ben-Adir).

As funny as it was introspective, High Fidelity felt unlike anything else — high praise for a show that was literally based on a 20-year-old movie that was already based on a 25-year-old novel. More than just a reboot of a bankable property, Hulu's High Fidelity was a daring correction — unafraid to confront the shortcomings of its source material to interrogate its outdated flaws. In one of the season's best episodes, "Uptown" (episode 5), Rob and her new quasi-love interest, Clyde (reliable "good guy" Jake Lacy), track down the music-obsessed dirtbag husband of a woman (brilliantly played by Parker Posey) trying to pawn off his prized record collection. They find him at a swanky bar and strike up a conversation, where he proceeds to patronize Rob while speaking directly to Clyde, even though it's Rob who possesses the encyclopedic music knowledge needed to follow his obnoxious stories. The climax of the conversation comes when Rob calmly corrects him on an obscure music fact that he refuses to budge on. Of course, Rob ends up being correct, and the dirtbag is left looking foolish for ever doubting Rob's expertise just because of her gender.

This is just one of the many brilliant moments that are peppered across the ten-episode first season of High Fidelity, and it was never hard to imagine that a second season would bring many more — if only it was given the opportunity to do so. That Hulu renewed an aimless comedy like Dollface — which I admittedly enjoyed more than most critics — while canceling one as nuanced, deep, and contemplative as High Fidelity is upsetting. Even now, during a pandemic that has made many studios more prone to renew shows that already have an established fanbase rather than greenlighting new ones, Hulu still couldn't justify a second season of this brilliant dramedy.

Even more upsetting is a small detail mentioned in Deadline's report of the cancellation. According to TV Editor Nellie Andreeva, the probability of High Fidelity pulling a One Day At A Time (or a Tuca and Bertie) by switching to a new network or streaming platform is pretty slim. No reason was given, but one imagines that a show as widely-praised as High Fidelity — especially one fronted by a star as bankable as Zoë Kravitz — would be the perfect candidate for a second chance. Besides, Kravitz has already expressed her desire to continue this story, telling Variety in June that she "would love to" get a second season. "I think the show has a lot of potential," she said. "I think there’s a lot more growing to do for everybody and a lot more trouble to get into. There’s a lot of places we could go and I would love to go there."

So consider this my earnest plea to Please Save High Fidelity, a perfect show. Aside from Insecure and the still-nascent A Black Lady Sketch Show, we don't have many adult-themed comedies that are fronted by Black women, and even fewer that are actively willing to probe deep questions about desire, depression, and human existence. Don't take away one of the only ones that do. I'm begging you.