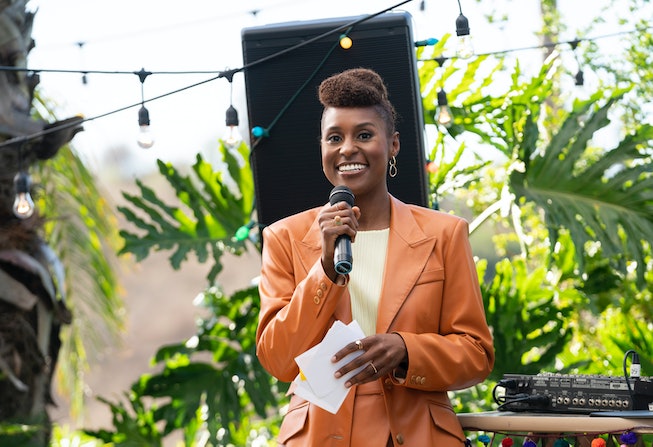 After releasing a new season every year for three consecutive years, Insecure creator Issa Rae took two years to deliver its fourth. In the meantime, Rae spent her time focusing on other ventures — executive producing hits like A Black Lady Sketch Show, acting in feature films like Little and The Photograph, and even opening a coffee shop. In this way, the gap between seasons was a sign that Rae had leveled-up. She was still the Awkward Black Girl whose misadventures caught HBO's attention half a decade ago, but now, she was also a bona fide Hollywood professional with the IMDb credits to prove it. At 35, Issa Rae was a more mature version of herself, so it only made sense that Insecure, the semi-autobiographical comedy that started it all, would be a more mature version of itself too, right? Thankfully, it is.

When Insecure premiered in October 2016, it felt monumental. Coming on the heels of the much-debated Girls, another HBO quasi-sitcom created by and starring an aimless millennial, Insecure felt like everything that was great about that show and none of what wasn't. It was still very much about late-20s struggles (with work, with friendships, with romance), but it also approached these problems from perspectives rarely seen on television. The four friends at Insecure's center were all Black women — Issa (Rae), successful lawyer Molly (Yvonne Orji), married know-it-all Tiffany (Amanda Seales), and flirty financial adviser Kelli (Natasha Rothwell, easily the show's best character) — and their problems often emanated directly from that fact.

The series pilot opened on Issa's 29th birthday — a less important date than the all-important Big 30, but close enough to it to warrant worry — and in the grand tradition of struggling young people, Issa's life was far from where she wanted it to be. At the time, she was living with Lawrence (Jay Ellis), her unemployed boyfriend of five years, and working a dead-end job at We Got Y'all, a nonprofit geared toward underprivileged children of color that was content having only one person of color, Issa, on staff. In its earliest iterations, the show was primarily focused on Issa's inability to break free from situations: her relationship with Lawrence had become too comfortable to simply leave and quitting We Got Y'all wasn't an option, no matter how many times she was forced to explain to her coworkers why suggesting they organize a "hip hop Shakespeare" class for a group of primarily Black students was problematic.

And that was fine, except nothing really changed over the next three seasons — a detail that made more sense in retrospect when it became clear that every season had taken place over exactly one calendar year, with the season three finale framed around Issa's 30th birthday. Questionable timeline aside, that reveal felt exciting: Now that she's 30, it was the perfect time to propel our central character forward. The episode even hinted as much by concluding with Issa cleaning and decorating her new apartment, then sitting down to calmly sip a glass of wine as she smiled at her improved situation. It certainly felt like the beginning of something.

Luckily, the hit comedy's fourth season delivers on that promise. From the outset, it's clear that this Issa is a more mature version of the protagonist we've come to know. Not that she's especially different — she still raps in the mirror; she's still, more or less, broke and struggling — but now, she's moving with purpose. She's wearing designer ensembles from Opening Ceremony to work meetings (even if she's keeping the tags on so she can return them afterwards) and hosting swanky events for established business owners (even if she's doing so in the courtyard of her apartment complex). She's making do while working towards something greater. "I'm on this forward path. I'm focused," she tells Molly in the first episode. "It's like: no job, no man. All of this sounds bad, but it's actually really good. It's good vibes!"

And the vibes are good. Season four picks up where season three left off, with Issa planning a block party meant to draw attention to the native talent of her now rapidly gentrifying Inglewood. With the help of new friend Condola (Twenties' Christina Elmore), Issa has formed some great professional connections, successfully reinventing herself as a career woman with clear goals and a set vision for the future. And while Insecure has always seemed at least partially interested in helping Issa progress, the past three seasons seemed content to keep her in the same place while everyone around her (friends and love interests included) evolved.

While Insecure has always seemed at least partially interested in helping Issa progress, the past three seasons seemed content to keep her in the same place while everyone around her (friends and love interests included) evolved.

Now, with We Got Y'all in the background and Issa seemingly less preoccupied with romance, Insecure has much more room to explore not only Issa's professional pursuits, but also the relationships that exist amongst her extended friend group, establishing Insecure as a story concerned with exploring the nuances of how Black women relate to each other. As always, the contentious best-friendship between Issa and Molly is a main thread, but for the first time, it seems to be the A-plot of the season, allowing their frequent disagreements to feel natural rather than forced as they sometimes have in the past. Even more interesting is the still-nascent friendship between Issa and Condola; they quickly form a bond, but find their loyalties tested after realizing that Condola's "new boo" is actually Lawrence. Even Kelli and Tiffany, who have long been relegated to the background, get juicier storylines this go-round — though Insecure could certainly still use some help properly integrating them into the overarching narrative. Nonetheless, as a show created by and concerning the lives of Black women, this new formula feels much more organic. It's more personal and more intricately drawn than the plethora of sitcom-style gags that seemed to define the show in earlier seasons.

Which isn't to imply that the show will scare off original fans. Many elements that initially made Insecure such a smash hit remain: the music, which prominently spotlights Black artists, continues to be unmatched; the performances continue to be pristine across-the-board; and the direction is uniformly sharp. It still doubles as a love letter to Los Angeles, too, but season four is even more determined to uplift the communities of color whose livelihoods are disappearing as gentrification takes over. Inglewood, once a primarily Black neighborhood, has now been nicknamed "I-Wood" by its new white inhabitants, and the series mines many laughs from the absurdly out-of-place new businesses, like a ritzy coffee shop that hosts "indie rock nights." While the tension between Blacks and whites has always been at the core of the show's interests, pushing the white people to the fringes rather than keeping them central to the story (as they were when Issa was still a frustrated employee at We Got Y'all) pays off dividends.

Last season, Issa Rae and Insecure showrunner Prentice Penny concluded every episode with a "Wine Down" talkback session. In the final edition, Rae referred to season three as a "set-up season," where they were "planting a lot of seeds to grow in season four." Hearing this after making my way through these new episodes (I've seen the first five), I can't help but agree. In fact, in retrospect, everything that has come before seems like a long-game set-up for what the show has become in 2020. Towards the end of season three, the series started to feel stagnant (remember Lawrence's return?), leading many to wonder where it could possibly go. Thankfully, after three seasons of watching Issa try to figure her life out, Insecure has finally grown up.

NEXT UP
Culture
Succession Season 4 Trailer Explodes With Family Drama
Culture
6 Shows To Binge Once You've Finished 'The White Lotus'
culture
Anna Delvey Is Getting A Reality TV Show
Culture
The Biggest Revelations From The Price Of Glee Docuseries
Style + Culture, delivered straight to your inbox.