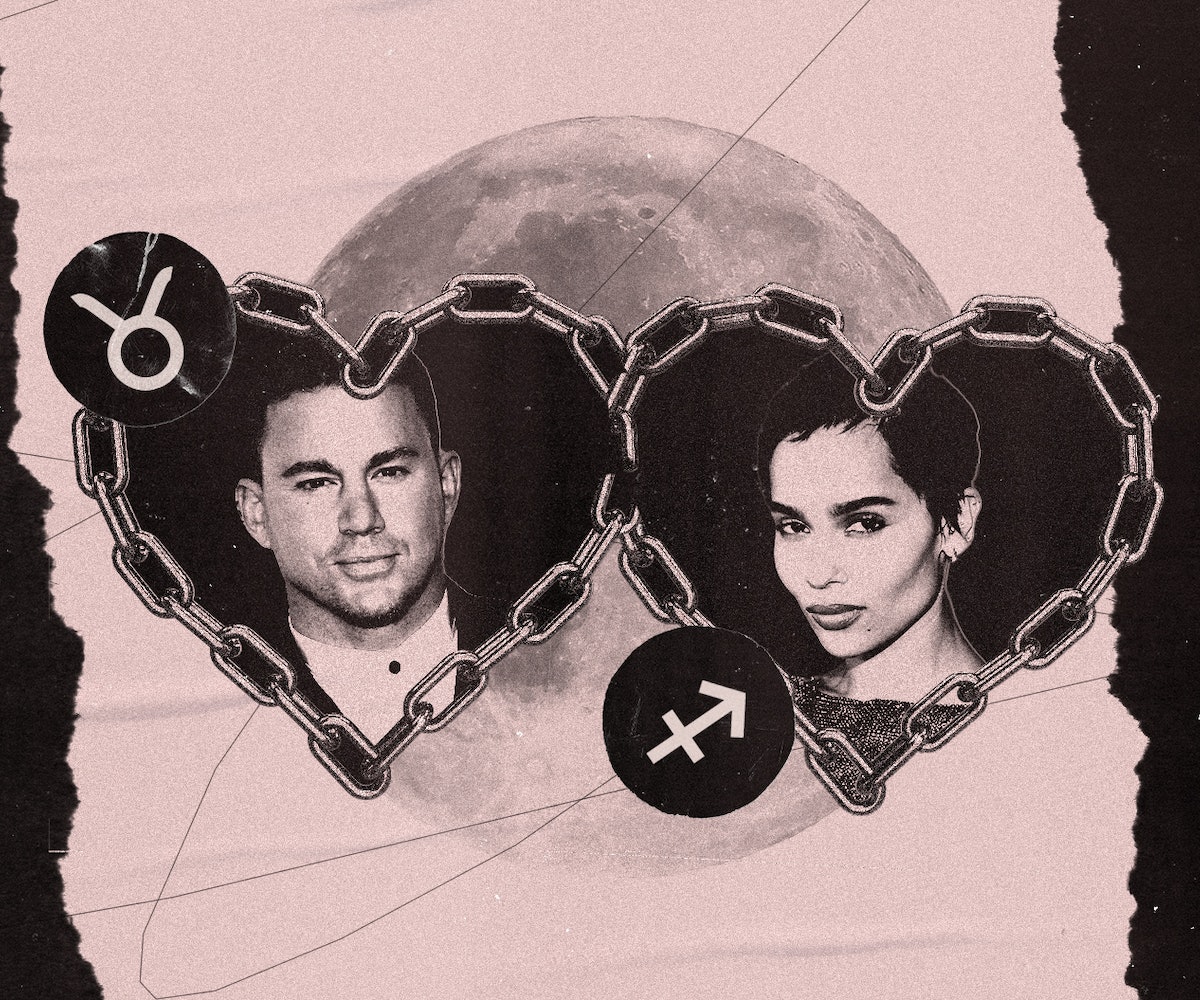 In a summer of halted progress, disgusting weather, and creeping ambivalence, someone has done the work to make us believe again. Cruising the streets of NYC in System of a Down tees and spectacularly curated sunglasses, Zoë Kravitz and Channing Tatum have revived the lost art of the twist celebrity pairing. In June, Kravitz announced the casting of Tatum in her upcoming directorial debut, Pussy Island, leading to a late summer of upstate trips, bike rides through the East Village, and iced coffee runs. Is this a perfectly publicized summer fling, or the touch of destiny? We explore the astrological archetypes of the stars for further insight.

Arriving in late April, the bull symbolizes springtime fertility, in the name of a higher feminine power. Ancient matrilineal goddess cultures linked the bull’s horns to the crescent moon, and to the fallopian tubes. Ruled by Venus, the Taurean man is meant to serve as her high priest, offering strength and solidity to support the radiant goddess. Count on Aphrodite to cast more classic beauties in her sign than a Ryan Murphy vehicle, with a line of living sculptures including James McAvoy, Richard Madden, Henry Cavill, Robert Pattinson, Jamie Dornan, Sam Heughan, Noah Centineo and Shemar Moore. Embodying the Taurean ideal, Channing Tatum delivers the Venusian aesthetic, but as in his star-making role in Step Up, he revives masculinity’s original purpose: to support your scene partner.

In The Fifth Element, When Milla Jovovich leaps off a building in nothing but a Jean Paul Gaultier strap suit, she stands for Sagittarian women everywhere. Ruled by Jupiter, the planet of wisdom synthesized through experience, Sagittarius constantly pushes the limits of the norm. Jane Fonda, Edith Piaf, Anna Nicole Smith, and Sinead O’Connor are not particularly known for their complacency; Sagittarius seeks change by questioning the status quo and imbuing life with theological and political meaning. Of course, the Sagittarian impulse has already made Kravitz a legendary Catwoman: in relaying her experience of being told she was “too urban” to play the role in previous Batman adaptations, she has challenged the self-serving standards of a racist, sexist industry. The Sagittarian woman dares, transgresses, and blasts doors open. At 32, Kravitz is just getting started.

Are Taurus and Sagittarius compatible?

Officially, no. But when it comes to a dance with the uncanny, an encounter with someone wild and mesmerizing, the bull and the centaur make sparks fly. Every sign in the zodiac has a diametric opposite: the sign six months apart from yours has something to tell you about yourself. Taurus, the sign of personal ownership, meets its match in Scorpio, which rules enmeshed power dynamics. But Sagittarius comes after Scorpio, putting it just out of Taurus’ direct vision, a foreign curiosity representing totally different values. Taurus fixates on stability, rooting in the body, and accruing power and possessions. The Sagittarian drive for adventure, provocation, and experimentation feels at once exhausting and exotic to the bull. And though the two signs operate differently, they share an unstoppable confidence and deep sense of worth. With Cher, Grace Jones, Barbra Streisand, Adele, Janet Jackson, Tina Turner, Miley Cyrus, JoJo, Britney Spears, and Nicki Minaj between them, Taurus and Sagittarius are the most fearsome of diva signs. Sagittarius pushes Taurus to step into the world and assert itself, while Taurus teaches Sagittarius how to enjoy the spoils of its successes. Though it’s not an ideal pairing, the bull and the centaur can make for a propulsive, transformative romance.

The Lovers & Fighters: Venus and Mars

For a clear understanding of how individual needs are met in a relationship, look to the archetypes of love and sex, respectively: Venus, planet of beauty, artistry, and receptivity; and Mars, planet of fire, passion and drive. In Aries, Kravitz’s Mars craves direct action, and to mow past anyone who stands in its way. Meanwhile, like Jay Z and Cardi B, the future Catwoman has her Venus in Scorpio, a placement demanding a strong and authentic lover: If you can’t handle my power, you’re out of the will. With Venus and Mars affirming Kravitz’s authenticity, agency, and independence, she’s well-suited to an older lover, who won’t shrink in insecurity as she embraces success.

Meanwhile, with his Venus in Gemini, Tatum craves creative and romantic versatility, a desire for freedom which a Sagittarius like Kravitz can appreciate. And, like Beyoncé, Cher, or George Clooney, Tatum has his Mars in Leo. For a big-screen name, cinematic star power is a given. Only those who can really see Tatum will have it in the bag. “No one gives me a chance to play a role like this,” Tatum told Deadline, about his Pussy Island casting. “Everybody throws me down a different alley and expects me to do a certain thing.” For all the ways Tatum celebrates Kravitz as his director, she can affirm his versatility, and appreciate the deeper subtleties of his talent.

For a check-in on the bigger shifts in your life, look to the planets farther from the sun, which orbit at a slower clip and spell out longer-term changes: Jupiter, planet of experience and expansion; Saturn, ruler of definition and structure; and Uranus, the great awakener. Kravitz wrapped up her Saturn return in December of 2021, and now has Jupiter cruising through her fifth house of creative expression, pleasure, and romance, with Saturn following in 2022. Meanwhile, from 2018–2026, Uranus blasts through Taurus, in Kravitz’s eighth house of metamorphosis, the chamber of ego death, where we cast away prescribed roles to enter a higher domain. As Kravitz embraces the iconic mantle of Catwoman, new levels of stardom and the authority of directing her first film, she’s seeking someone who will not judge her based on previous modes of self-presentation.

For anyone with Taurus placements, the Uranus transit indicates once-in-a-lifetime changes, as the planet of upheaval shatters any limited notions of scarcity or entitlement. But now that Tatum is in his forties, he has officially entered his Uranus opposition, the period when the revolutionary planet comes midway through your chart to shake you out of boredom. For some, this early-forties period plays off as a mid-life crisis, and for others, it’s a genuine reclamation. If Tatum wants to be seen in a different way, why not go with a Sagittarius who can ride, celebrate, and further the wild swings he wants to try?

As the Sagittarian goddess launches herself into space, sometimes too close to the sun, what greater relief is there than a solid man ready to catch her on the ground? And, just when a Taurus begins to stagnate in security — and complacency — perhaps the fire of a galloping, incandescent lover can awaken something new and liberating. They may not approach life, long-term, in the same language, but for however many moments they share, Taurus and Sagittarius can make for a cinematic adventure.