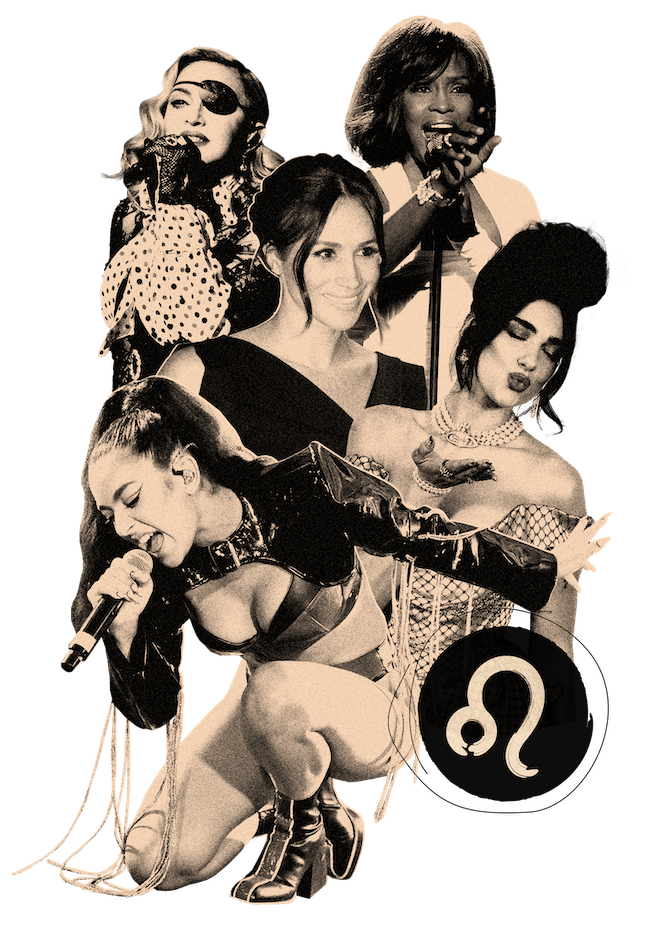 At the fall of the planet Krypton, an alien infant is rocketed away, descending on our Earth like Moses coming down the Nile. He is raised among humble farmers, nourished, and given a sense of belonging. The fall of his divine soul to our barbaric world and his rooting in the ancestries of his two families mythologize the Cancerian struggle. But as the alien child realizes his god-like power, sustained by our yellow sun, firing off into the skies and claiming his title as Superman, there can be no doubt: a Leo is born.

During Cancer season, love is indeed a battlefield: to affirm the needs of the heart challenges every notion of scarcity our social order is built on. We found a home, and connected to our history. Now, the survival narrative is over. What Cancer teaches, Leo radiates by example. The fight for survival is over! Now we emerge as the perfect sum of our experiences. The platonic Leo, Madonna, has decreed: After the long night comes the Ray of Light.

If Cancer represents an overeager mother with an intense, possibly annihilating need to give, Leo is her entitled child, attaining self-definition by receiving love. Come Virgo season, we’ll define our form by setting limits, and, with Libra, negotiate the rules of relating to others. But for Leo, the world is a mirror, and to be without others would be to go blind. When you see the world through Tracy Jordan’s eyes, it’s certainly a better place to live, because everyone is a perfect shade of you. Leos take everything personally because they can’t distinguish the people around them, or the things they create, from themselves.

"I need to know that I am being heard," says Valerie Cherish, the Leo Lisa Kudrow’s greatest creation, on The Comeback. Indeed, for Valerie, the battle for attention is one of survival: without a camera present, how will she know she’s alive? Though she fashions herself a classical actor, Valerie’s greatest role is herself. Imprisoned in an industry of artifice, Valerie doesn’t understand how to play the game, but she’ll outlive and outlast anyone until she gets her moment. Free of Cancer’s inherent insecurity, Leo never questions its entitlement to love and gratification. Leo’s ruler, the sun, never goes out, and neither do its messengers. Heavy-hitting lions like Lucille Ball, Martha Stewart, and Luca Guadagnino didn’t blow up until their forties, meeting success with casual confidence.

What is the divine calling of a Leo? To be themselves completely, of course! Whitney Houston’s frequently-raised question “Can I be me?” spoke to Leo’s quest for embodiment in a fragmented world. And so the stage becomes their refuge, a portal to self-actualization and liminal apogee where they can be seen in their very best light. No one sees Madonna live and writes home about her singing or dancing. It’s about the totality of the show, the perfection of presentation, the realization of form: For one night, the platonic Madonna reigned, and the right ticket buyers got to witness it. It’s this deployment of image, and setting of a stage, that make Jennifer Lopez and Dua Lipa so addictive: Though they can certainly dance and sing, respectively, you really watch them to be mesmerized, to imagine such total freedom in your own body. It’s why we don’t need Jackie O, Princess Margaret, or Geri Halliwell to do anything specifically. Just give them a huge wardrobe budget and let them give it!

Of course, a king can’t rule under a hollow crown. The show needs substance. Leo’s diametric opposite is Aquarius, the sign of the people, progress, and reinvention. Aquarius rules the circulatory system, zooming out to focus on the needs of the whole. But Leo rules the heart, and acts as the center of power, the face of the movement. Leo must be in dialogue with the moment. Charli XCX redefined her career when she ditched conventional industry expectations and remade herself as an avatar of pop futurism. Like Madonna before her, she represents to her fans a larger cultural reclamation.

The star and sexy symbol Mae West understood that by fulfilling her role, she could f*ck with a changing discourse on sexuality — and certainly cash in on it. Charged in 1927 with “obscenity and corrupting the morals of youth,” when she wrote, produced, directed, and starred in the hit play Sex, West was given a choice: serve 10 days on Welfare Island, or walk away with a fine. West chose jail time, noting to a journalist at the trial: “I suspect this will be the making of me.” She was, of course, right. Within a decade, West would become the second-highest paid person in the United States, whose star power was credited with saving Paramount from bankruptcy.

“For all their natural charm and popularity, then, why are Leos so private? Because fans are not the same as friends.”

Though Meghan Markle attained celebrity when she married Prince Harry, her star was truly born when she shepherded their departure from the monarchy. Like her Leo predecessor Monica Lewinsky, Markle was merely claiming her birthright and asserting her authenticity. But by challenging the throne, she embodied the sentiments of many within and beyond the Commonwealth. Whether she’ll play her part with West’s shrewdness remains to be seen. As Markle proved to the monarchy again, Leos are born to lead (or tyrannize, depending on who you ask). Bill Clinton, Barack Obama, Francois Hollande, Hugo Chavez, Benito Mussolini, Abu Bakr al-Baghdadi, and Claudius among the pantheon of ruling elites. Burning with charisma, and a smile of relatability, they sell a fantasy to their people: I am one of you. Maintain a connection to the big picture, and you’re in for a long term. But get caught up in Leo’s myopism, and you’ll go the way of Napoleon.

For all their natural charm and popularity, then, why are Leos so private? Because fans are not the same as friends. The tight inner circle acts as an undistorted mirror for the sensitive Leo, a safe circle in which they can fully expose themselves. Without the core crew, a Leo’s self-definition can change with the season. When you’re in, you’re in for life, as Debi Mazar and Rosie O’Donnell can tell you about their good friend Madonna. But if you’re out, you better know your place. “We’ve never been friends,” Kim Cattrall said of her Sex and The City co-stars. “We’ve been colleagues.” Like fellow Leos Gillian Anderson, Carrie Ann Moss, Kate Beckinsale or Angela Bassett, Cattral came to set to turn it out, every single time. She gave us the show; she doesn’t owe us her private life, or her relationships.

When you were brought here to express yourself, you may not realize the impact of your voice. In affirming her gifts, and sticking to her guns, J.K. Rowling ensured the success of the best-selling book series of all time, and claimed unprecedented authorial control over its endless adaptations. But now, cut off from reality like Meryl Streep in She-Devil, existing in a Twitter feedback loop in which her opinion is fact, Rowling — like her fellow Leo Joe Rogan — has become a dangerous lesson of unchecked power, bad opinions, and rampant sycophants. How do you stop a king who won’t take advice?

But when a Leo does turn their gifts over to a higher calling, to dignify a benighted world, they leave a legacy as everlasting as the sun. Will we ever not need the gospel of Helena Blavatsky, the philosophy of James Baldwin, and the music of Tori Amos and Kate Bush? A Leo realized serves as a living epitome, an ideal incarnated, a heart pumping out blood to every digit of the Aquarian lifeform.

“You will give the people of Earth an ideal to strive towards,” Superman’s father Jor-El instructs him. They will race behind you, they will stumble, they will fall. But in time, they will join you in the sun. In time, you will help them accomplish wonders.” You’re alive. The light is on you. Who do you want to be?