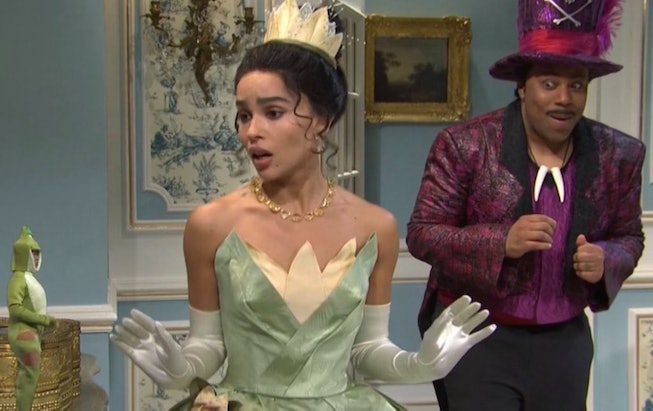 You know how press tours go. One week you’re on Jimmy Fallon talking about how you drank milk out of a bowl to prepare for your Catwoman role and the next you’re playing Princess Tiana in a Saturday Night Live skit about how frogs don’t have genitalia. Such is the life of Zoë Kravitz, who made her SNL debut on Saturday as the cutest host in the history of the show.

“I currently have a new movie out called The Batman,” she explains at the top of her monologue. “In the movie I play Catwoman. Sorry, THE Catwoman. To prepare for the role I watched the movie musical Cats every day for a year, which I actually heard was the same way Joaquin Phoenix prepared to play The Joker.” She’s later joined by Kate McKinnon, Ego Nwodim, Aidy Bryant and Chris Redd as various version of catwomen (though Bryant is actually just a cat lady,) prompting Kravitz to make a “Caturday Night Live?” joke.

Later, Kravitz plays a maid of honor who gives a speech with the word “girlie” in every sentence that opens with, “Tanya is like a sister to me, and not just because we’ve both seen my dad naked.”

She also plays a woman shopping with her boyfriend in an Amazon Go commercial about how Black customers are rightfully skeptical of the idea of being able to take something from a store without paying for it. “He’s learning,” she says of her white boyfriend who grabs a kombucha for her after initially not understanding why she wouldn’t want to pick it up. Kravitz also furiously looks for the world’s “smallest, fastest cat” the Please Don’t Destroy guys were planning to gift her.

Outfits-wise, we also loved Kravitz as Princess Tiana in a Princess & The Frog skit, where she wears a near-identical green tulip organza dress and a crown as her animated counterpart and learns the ins and outs of a frog anatomy and reproduction, much to her chagrin.

Kravitz was nervous for her SNL debut, telling Jimmy Fallon that when she asked friends who had hosted for comfort, they all replied, “yeah you should be nervous.” But Kravitz is so at ease doing live comedy. She seems utterly chill all the time, the kind of chill that comes from growing up in a limelight bright enough to encourage performing but not so bright it makes you into an unrelatable superstar. SNL has been hit or miss for the last...decade or so? But Kravitz’ episode is well worth the watch. Here’s hoping the Catwoman press tour be as long as Gaga’s House of Gucci tour, an Oscar-worthy performance in its own right.