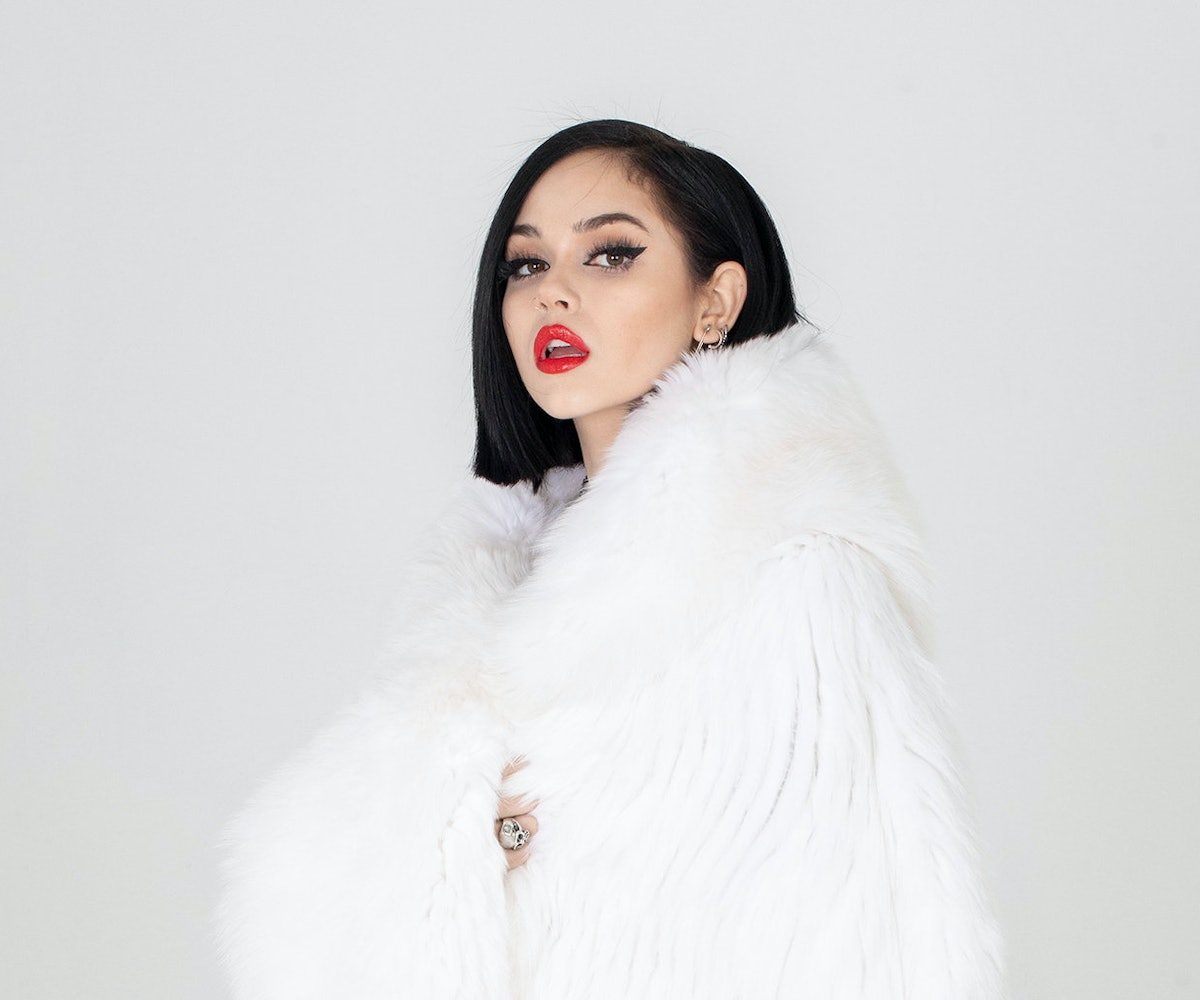 Maggie Lindemann wants you to know that she's different than she appears on the internet. Best known for her hits "Pretty Girl," "Couple of Kids," and "Obsessed," the star makes a point to draw attention to the fact that her newest music makes a distinct departure from her past viral bops. In her two newest singles, "Would I" and "Human," Maggie shows us a nuanced and more mature side of herself. Maggie tells NYLON, "I think I'm finally coming into who I am and I'm really comfortable with the music I'm making and art I'm putting out into the world. It's a beautiful feeling. It's been a process to get here."

Since releasing "Would I" and "Human," Maggie has been busy. She's been on tour in Japan, written and recorded new songs (still forthcoming), and continued to personally engage with her over 3 million loyal Instagram followers all while simultaneously yielding to self-discovery. It is this keen self-awareness and profound dedication to her art that reinforces the authenticity, depth, and personal nature of her poetic pop music. Below, we talk with Maggie about touring, her music, and what led to her coming out.

You just got back from touring in Japan. How has being back been for you?I'm back in Los Angeles right now. I've had a really strong year, and I am working on some amazing projects. I've been in the studio a lot, and I'm finally making music that I'm proud of.

I think I'm finally coming into who I am and I'm really comfortable with the music I'm making and art I'm putting out into the world. It's a beautiful feeling. It's been a process to get here.

Why do you think you're finally able to make music that you're proud of?The type of music I want to make is different than ever before. I've really grown into myself. It's been a journey [especially since coming out]. I was working on a project actually, and there was a ton of LGBTQ stuff around me and, at the time, Periscope was a big [platform], so I used Periscope to announce to the world that I was bisexual. I think if I were to come out again, I would definitely do it completely differently, but, in that moment, it felt right.

I think coming out helped a lot with me growing into myself, and being who I really am. Coming out really shaped who I am today. I finally feel like I'm not hiding anything. If I want to talk about [a love interest] in my music, I don't have to worry about hiding anything about it. I can finally be and express myself.

What do you think most people don't understand about coming out?To be honest, a lot of people don't understand how hard it is, especially if you've never experienced it firsthand. A lot of people even responded to my coming out video by claiming I was being extra and just wanted attention. It's weird because in that moment, when it was all happening, I was not trying to draw attention at all, I was literally just trying to be myself for the first time.

Coming out is not just one moment. It's everything. I texted my parents moments before I posted that video, and I was so nervous. I grew up in a Christian house, and I went to church my whole life. I wasn't taught that [being LGBTQ] was necessarily wrong, but [LGBTQ relationships] were never talked about at all. It was just scary because I couldn't even imagine how they would respond to the video.

Do you think coming out is becoming any easier for young people today [than in the past]?I would hope that it's easier for teens to come out today, but a lot of teens still come from conservative families that do not make these conversations easy by any means. I do believe that this new generation is going to be more understanding though, and I'm really excited about that.

How do you think your art has changed as you've continued to grow into yourself?The type of music I want to make is different now. All around, I feel like I am such a different person. Especially since moving to Los Angeles [from Texas], I've had to change so much.

What is something that makes you angry?I hate when people say I'm not a real artist, or when they discount me because of my age. I work really hard, and people don't always seem to look past my age. My whole entire life is music and [music] is what I'm really focused on. Music is all I know. I want to do music forever.

Especially when I came out, being "young" [was such a label that] was used against me to undermine my own sense of self. People told me I might be confused or just trying to follow a trend, but I didn't even try to respond. It's toxic. Only I know myself, and I trust that.

What's your relationship like to the internet?I love memes on Twitter. They're amazing. I love my fans, and I think I've grown a lot closer to them over the years. I think the more I'm myself on the internet, the closer I feel to my fans and my music, and the closer I am to the person I want to be.