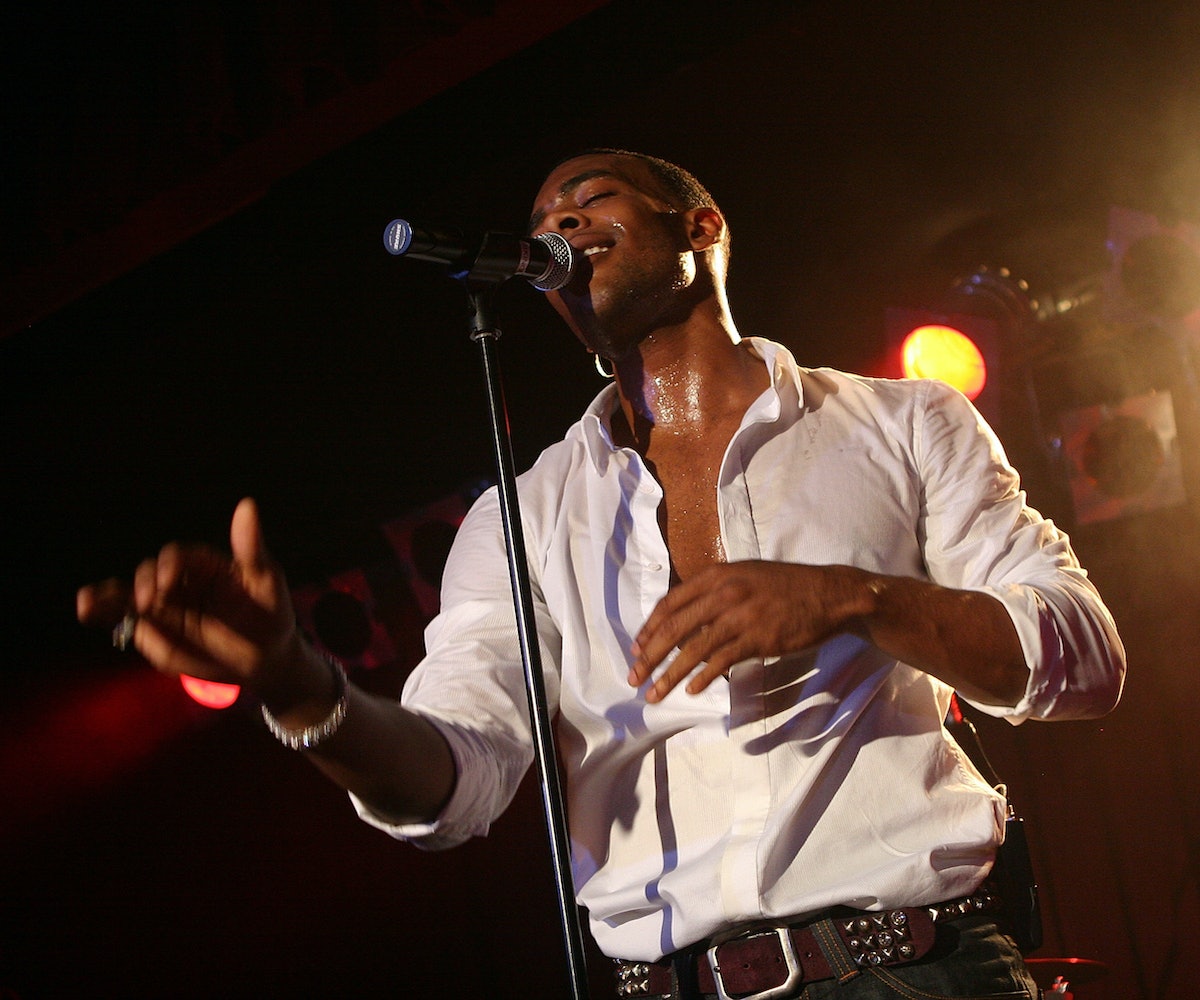 I hung out with R&B singer Mario this week—I can hear my 16-year-old self screaming as I type those words—and before I even got my recorder started, we were swapping theories about the existence of mermaids, tattoo symbolisms, and how he really feels about theater after doing Rent: Live! last month, with an all-star cast that included Tinashe and Vanessa Hudgens. After Mario serenaded me with some songs (that were way more romantic than anything I'll catch on the Billboard R&B charts, because I wrote them myself), we sat down to talk about his passion: music.

Mario's career peaked before social media revolutionized the music industry and the very concept of fame. I wanted to hear from him about all of this, plus his part in the biggest show of the spring: The Millennium Tour featuring B2K, Lloyd, Pretty Ricky, Ying Yang Twins, Chingy, Bobby V, and Mario. Check our conversation, below.

Let's talk about the evolution of R&B. How you would describe the shift of R&B as a whole, from when you started to now?

In general, as an R&B artist, when there was no pressure of the internet, you could be more introspective and selfish about your music. Your inspiration came from the tradition of R&B and the way that it was approached from a writer's standpoint and the culture of it. I think that when the internet popped off, you started having newer artists that weren't necessarily the greatest singers, merging with hip-hop, and that became a culture and a fad. R&B artists started trying to compete with that. That took over, became a virus, and now we have a world where hip-hop and alternative hip-hop have merged with R&B. Auto-Tune has made it a lot easier for artists to make records back-to-back. People's ears get in-tune with certain sounds, you can end up hating some, but then you end up loving it. It's not just one thing, it's multiple different circumstances that influence where we are today.

I do think that R&B is coming back, it's not the croonage that you're used to, but there's a lot of great R&B out there. H.E.R. just won a Grammy for her R&B; Daniel Cesar just won a Grammy. It's there. An artist on my label, Jade Novah, she's an amazing singer, and her concepts are amazing. She's one of those artists who has taken R&B and put a twist on it, making it more about self-love, being aware, the power of being a woman, all of those beautiful things. That's what the new R&B is, it represents where we are and our growth as individuals.

How are you feeling about the evolution of your music, and where your music is now? Where are you picking up your inspiration from?

My last album, Dancing Shadows, is inspired by my intent to show my fans who I am as a writer, producer, and creative. It was also me growing my wings back. I had been with a label that didn't allow me to have that creative expression. I think a lot of artists go through this. I think that because I started so young and my fans have grown with me, it's a whole new level of reintroduction that, for me, was necessary. I have over 500 to 1,000 songs that my fans have never heard, that are more traditional, crooning R&B songs. Because there's so much substance in my life that I've never shared through my music, that's what Dancing Shadows represented for me.

The idea of fame has also changed. How have you dealt with that as someone who has been a celebrity since before the big boom of social media, and now after? Do you feel like your life is looking different as a result of it?

Yeah! You can create whatever you want, even if it's not real; you can create whatever perception or narrative you want for yourself. I never really fully took advantage of that. I've been paying attention to the game and how things are shifting, like, What do I really want to accomplish as my legacy, and how do I want to go about doing that? Because I know that the "15 minutes of fame" thing, creating drama on the internet or whatever, that only lasts for so long. What things can I do to show my growth as a creative? Doing more movies, doing more… whether it be a Broadway show, a live reproduction of Rent, going back on tour, that's who I am. I'm a versatile, you-can't-put-me-in-a-box kind of artist. I can go on stage and put on an R&B show, and then I can go do a TV show like Empire. Those are the things that I focus on. I don't focus on the internet, topic of the day stuff, because I feel like it doesn't really last long, I don't think it benefits me because my fans want to see talent. They want to see real, real shit. I do like doing stuff like this, and this is the cool part. Merging and doing cool things because that shows personality. I think it gives your fans a look into who you are as a personality. Outside of that, I really stay away from drama.

What was it like preparing for the Millennium tour?

I'm still preparing for it. It's incredible. Every day, I'm changing something or finding a new way to make it exciting. What really makes the tour fun is doing the first five shows and figuring out what works and what doesn't work. What are my fans reacting to and what are they not reacting to? How can I make it better? That's when you really perfect it. You've got your template and what you want to do, but then the ladies might want something different. You really just pay attention. It's like dating a new girl; you can't assume that you know everything, you have to pay attention and keep perfecting it. Keep perfecting how to please them. It's exciting, though.