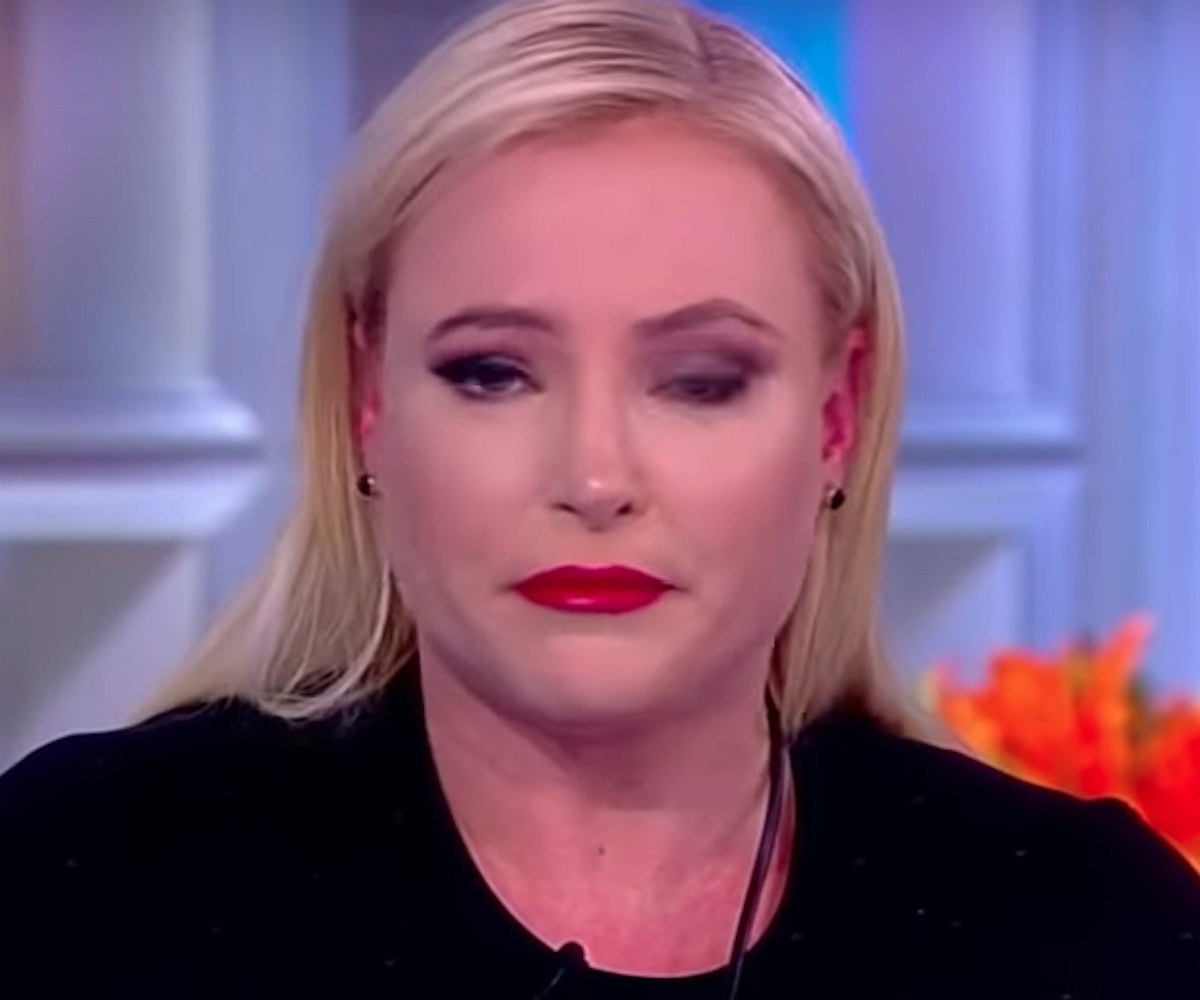 Screenshot from 'The View'

After critiquing pro-Israel lobbying group Aipac, Representative Ilhan Omar has faced unwarranted and widely disingenuous accusations of anti-Semitism from her congressional colleagues and pundits alike, leading to a House vote yesterday in which members officially condemned "anti-Semitism, Islamophobia, racism and other forms of bigotry." This vote was a transparent attempt to chastise the freshman Democrat from Minnesota, and to remind her that dissenting from the commonly agreed upon Israeli discourse is unwelcome. But for some people this rebuke was not enough, and a new weapon needed to be deployed: the bitter tears of Meghan McCain.

Yesterday, on The View, McCain, a talk show host and daughter of a failed presidential candidate, wanted to let everyone know that Omar's feelings about Israel and Aipac are akin to those of the neo-Nazi, tiki-torch-bearing white supremacists who marched in Charlottesville, Virginia, in 2017—an act of homegrown terrorism, which resulted in the death of Heather Heyer. Omar, meanwhile, has done nothing more than question why she is being asked to declare allegiance with a country other than America, and rightly treating Aipac as what it is: a lobbying group which, like all lobbying groups, works to assert its influence within Washington, D.C.

McCain, though, doesn't care about facts, because, as she explained on The View, "This issue is a really intense issue with me... It's not a partisan issue." The "issue" of which she speaks is anti-Semitism, and the reason that it's so personal, McCain said, through tears, is not only that McCain feels that she "probably verges on being a Zionist," but because she has two Jewish friends, former Senator Joe Lieberman and his wife, Hadassah. McCain said, "Just because I don't technically have Jewish family that are blood-related to me doesn't mean that I don't take this seriously."

And it's clear that McCain does take this seriously—but it's not fully clear that bigotry is what upsets her so much. After all, this is someone whose beloved father voted against making Martin Luther King Day a federal holiday, used racial slurs when referring to Asians, joked about a teenaged Chelsea Clinton's looks; intolerance and hatred could said to be in McCain's DNA.

But also, Omar wasn't espousing hatred or intolerance; she is asking questions that are already widely posed. She is interrogating power structures, and she is doing it in an equal opportunity way (she is a fierce opponent of the Saudi regime with which Trump and his ilk are so closely cuddled up). This interrogation of existing power structures, though, is a threat to the people who benefit from them, people like Meghan McCain.

Prior to crying, McCain revealed what she really thinks of Omar, and what it is that really bothers her about both the Congresswoman and the Democrats, in general. McCain tried to explain Omar's popularity, saying, "She fits a lot of boxes that Democrats like: She is the first Somali elected member of Congress; she is the first woman... the first of two Muslim women elected to Congress; and the first minority woman to serve from Minnesota. The problem is that there is pressure to support her within the Democratic party because identity politics and intersectionality is something that is important to Democrats."

McCain had already called out "dog whistle" anti-Semitism previously on the episode, having apparently learned the term from New York Times editor Bari Weiss on a prior airing of The View, but, McCain didn't seem to realize that by dismissing the Democrats' desire to have a diverse, intersectional group of elected officials in Congress, she was herself dog-whistling her own racism. Terms like "identity politics" and "intersectionality" have become coded words by Republicans, a way of saying that what Democrats care about is diversity, aka not white people. McCain knows this and she exploited it in her entire anti-Omar diatribe, making clear that what she values are the people who are like her, who have her values, who have her politics, who are decidedly not Muslim or black or Somali refugees.

McCain's tears aren't because she is worried about the safety of Joe Lieberman, but rather because she is worried about her own safety. She fears the day when she becomes irrelevant, when her status is diminished, when her voice goes unheard. And, so McCain cries, and weaponizes her tears in the service of tearing down a woman of color, as have countless threatened, bitter, privileged white women before her. But as far as weapons go, McCain's tears aren't very powerful; her craven motives are easy enough to see, her self-interest practically palpable. The only thing they signify is an attempt to garner sympathy for a losing cause; and the only thing we should do when seeing them is turn away, and look to the future, not that decaying past.