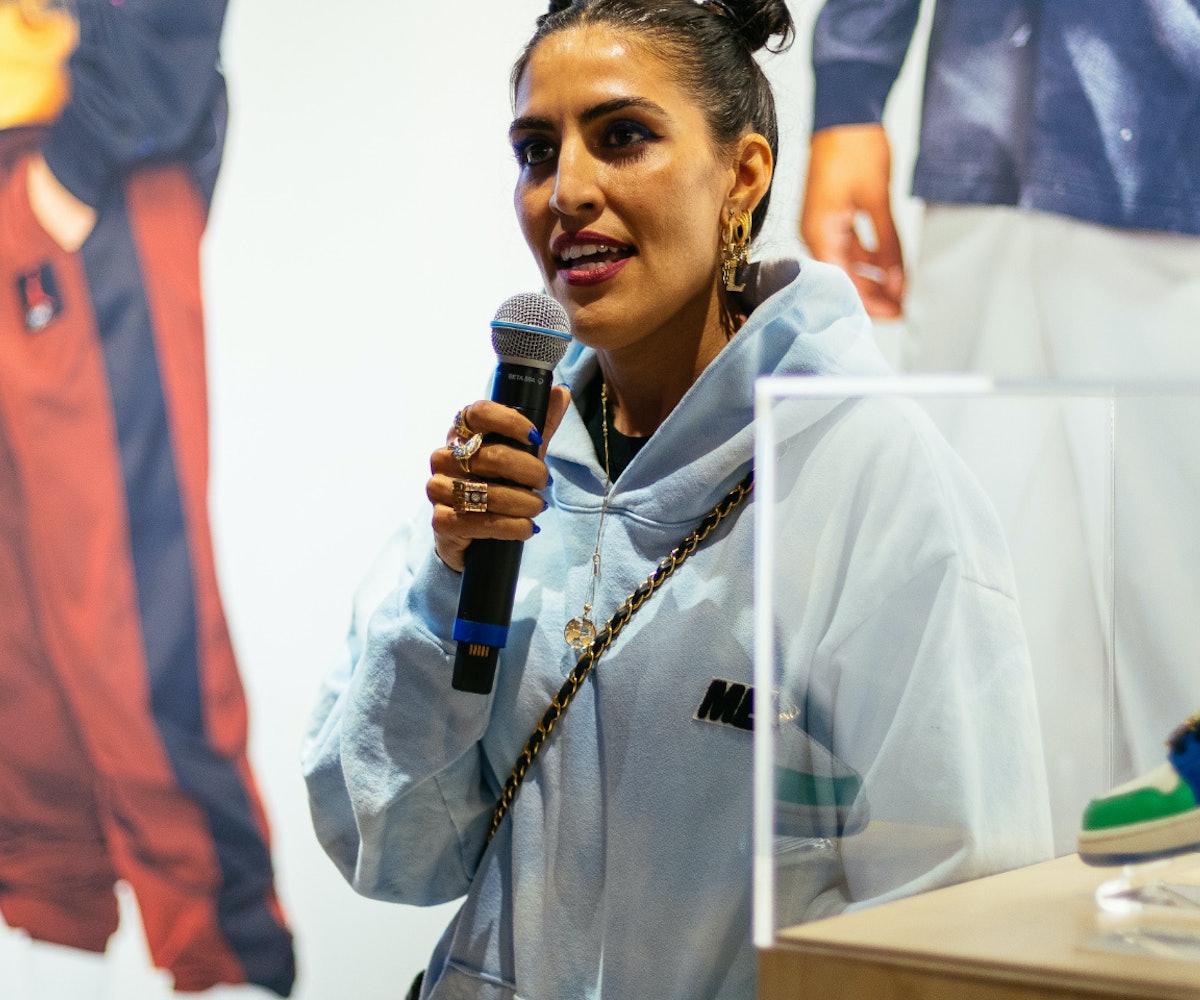 Melody Ehsani's Air Jordan 1 has yet to be released, but its resale worth is already at around $480 (for comparison, its retail price is $130). When the designer —who previously collaborated with Reebok — dropped the sneaker one week ahead of its Friday, November 15, launch, bots took over her namesake brand's website, causing the Los Angeles-based founder to turn down a slew of orders and sell the shoes via Instagram DM instead — first come, first serve. While this process left a lot of customers without a pair of their own, the high demand shows what many of us already know: how great of a market there is for women who love sneakers.

As part of Jordan Brand's new "Fearless One" collection for the holiday season, Ehsani is the latest woman to design a sneaker for the Nike-owned label. She's one of a very select few — Aleali May and Vashtie Kola are some of the others — to garner this type of gig. And while brands have been "slowly, but surely" moving in a better direction to cater to their female customers, says Ehsani, that change "isn't necessarily going to happen overnight." Luckily, she points out women like May and herself are "really trying to push the agenda forward and shine a light on the fact that there is a market for women that is untapped." With the demand that's already behind her soon-to-drop sneaker, we certainly think that light will shine even brighter.

As a longtime staple in the streetwear world, Ehsani's collaboration with Jordan Brand was a long time coming. Her take on the Air Jordan 1 Mid not only pays homage to a recent trip to Egypt and her penchant for nail art (more on that, below), but the sneaker's eye-catching detail, a removable gold watch — set on the day 23 and the time 2:30, a nod to the great Michael Jordan — is a play on the designer's signature jewelry line. "I love the idea of having items on the shoe that are removable so that you can make it your own," says Ehsani. "It also comes with six different lace colors so you with each one you choose, it can look like an entirely different shoe."

We caught up with Ehsani over the phone to talk about how her business has evolved over the past decade, her creative process behind the collaboration, and whether or not she would launch a sneaker of her very own.

It's been well over a decade since you launched your brand. How has it evolved?

It's constantly evolving, and it's such a trip to say this, but when I started my business, Instagram didn't exist yet. The only real social platform we had was MySpace at the time. Then when Instagram happened, it changed the game in terms of how people started receiving information and seeing things.

And so it's crazy because my business is really founded on word of mouth — like one girl telling the next girl telling the next girl, which women are really effective at — but it's evolved to a bigger machine than that. A lot of these companies have figured out how to do that in a very linear way, where you can count and measure everything, and so that's caused us to pivot a little. But it's constantly changing. We're really trying to stand at the cutting edge of trying to figure out how to stay relevant and stay close to our core consumer without selling out on our beliefs for marketing.

Who's the Melody Ehsani customer?

Somebody that is interested in going against the status quo, who's more about material wealth than materialism. We don't really have consumers that are super diehard about buying one thing just to get the next thing. They're buying things because it supports who they are; they feel like it represents what they're about at the time. It's pretty cool that, for the most part, we have a very conscious consumer, generally between the ages of 21 and 35. Girls that are super ambitious and edgy and willing to take risks; [girls who] know how to bring together high and low.

How would you compare your Los Angeles store, which you opened in 2012, to your New York City flagship that opened in 2018?

They're really different in the sense that the cities are so different. They almost have different personalities. The L.A. store has become more of a community space for us because we host events all of the time. We're also down the street from Fairfax High School, which is really cool because we get a lot of the girls from there, so it sort of turned into this "big sister on the block" vibe. We were also the first women's store on this street, which is predominantly male-dominated, and so this store represents and established a whole other vibe.

New York is a really tiny store. Unfortunately, we can't do as much community building as we want, but it's a lot of interpersonal relationships. The shop girls have their own special relationships with people. It's also in an area that isn't particularly known as any one thing. Whereas in L.A., the store is in the streetwear capital of the world that Fairfax has evolved into.

What was the creative process like behind the Jordan Brand collaboration?

My husband performed in front of the pyramids in Egypt early this year, so I was lucky enough to go with him. It was really special because I had been to Egypt before on a couple of inspiration trips, and it's one of my favorite places in the world. I feel like there's so much history there in terms of art and architecture and so much mystery. I've always been a history nerd about that kind of stuff. My nails are always a big thing for me and so, in preparation for the trip, I did this color pattern on my nails where each one was a different color. They were all of my 10 favorite colors and, when I got there, I took a picture in front of a pyramid of just my nails.

So when I got into the design process with Jordan, I really wanted to do something that shows color, and in a matter of 24 hours, we literally came up with the whole color story that was coupled with the inspiration I had about this whole concept of time — you always have enough time; the time is now — which is why the sneaker has the watch. And the quote around the shoe is from one of my best friends Julie Burns Walker, and it says, "If you knew what you had was rare, you would never waste it."

What are some of your first personal memories of Jordan sneakers?

Jordan was such a big, iconic thing for me growing up. It was kind of one of the first things that I ever coveted to have. It was Michael Jordan. It was status and new and fresh, and it represented all these things across the board. It didn't matter if you were the kid that liked rock or hip-hop, or the kid that actually followed basketball or didn't. I never thought I'd be able to own a pair of Jordans. I was actually really late in owning my first pair; I was 16 or 17. I got my first pair of 1s at a consignment shop, and I was so excited. That was like 25 years ago.

You first launched your business with footwear before pivoting to jewelry. With collabs from Reebok and Jordan under your belt, do you see yourself designing shoes on your own for your brand?

I never like to say what I won't do, but I will say that I really do like collaborations. My criteria for a collab is that I only like to work with companies that specialize in a certain thing that I don't specialize in. So for me, I mastered, in some ways, the whole jewelry thing. I know exactly what I'm doing. I know how to make it; I know the process. In terms of shoes, especially when it comes to athletic shoes, there's such a science and art behind it. So partnering with Jordan Brand on a shoe, it's like, I'm never going to put them out of the time and resources that they have into the engineering that shoe. I would rather work with an expert than try to do it myself. I appreciate that in a collaboration, but you never know.